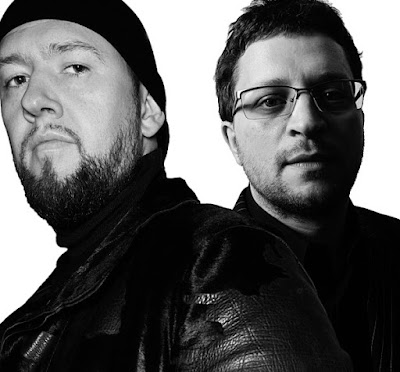 Mark Pritchard & Tom Middleton have been responsible for some of the most important electronic music to come out of the UK. Both having been immersed in the dance scene since 1991. Both of these guys together and separately have a mind boggling amount of aliases for their music and swinging from old school electro to drum'n'bass to house music and all points inbetween! You name an electronic genre these guys have done it and have an alias to cover it. Here however I am gonna concentrate on 2 of their best known projects that have meant the most to me, Reload & Global Communication.

I have often stated my love for early/mid 90's electronic music, at that time I was in a transitional period moving away from the brutal music of my youth and well I guess maturing, I was also smoking a lot of weed and what better music is there to "chill out" with than what was coming out of the then emerging electronic (or "Ambient" as we called it) scene. With no internet you just had to piece together what you could, take chances, join the dots etc. You'd look at a cover and think yeah that looks ambient and take a chance, mistakes were made and. some terrible records were purchased but when you struck gold it was a BIG event one of those was Reload "Auto-Reload Vol.2" 12"

Back in the early 90's there were a couple of label's that were a guarantee of quality the obvious one being Warp records who were in the middle of their "Artificial Intelligence" series releasing the debut by Autechre and projects by Aphex Twin and Richie Hawtin (Plastikman) among a load of others. The other much smaller operation was a subsidiary of indie giant Creation Records named Infonet. Infonet whilst mainly sticking to more dance orientated tunes did put out a couple of blinding electronica releases one of them being "Auto Reload" Vol.2 by Reload and later their only album "A Collection Of Short Stories" I'm going to be a bit lazy again and give you some discogs blurb....

"Reload was originally a Mark Pritchard solo project. Later Tom Middleton joined Mark on some of his Reload releases, As Tom became more heavily involved on the Reload "A Collection of Short Stories" album, Reload came to mean both Mark Pritchard and Tom Middleton.
All Reload Remixes were done by both Mark and Tom together"

Well not exactly helpful! I find myself in a bind with these posts, whilst I really want to share these electronic goodies with you as it's something I own and listen to a lot of , coming from a mostly traditional "rock format" type background in music (guitar,bass,drums) I really have little idea how to describe this kind of music do I say"ooh it's got some great swooshy bits and a nice clang to it here and there"? Who knows? I have to assume that the reader of these posts is unfamiliar with the music because otherwise I could make comparisons to other artists in this genre. So here goes anyway!

SO Reload differ greatly from Global Communication in the fact that over the course of a handful of EP's and one album they have a more scattershot beat based sound more compatible to artists like Aphex Twin (See posts HERE & HERE) or Gescom (See post HERE) Their Early 12" EP's have a much more dancefloor orientated sound than later releases verging on abrasive techno and in some cases house music. However around 1993 when as stated above Tom Middleton joined the Reload name things started to become more lush. Reload definitely shade their music in dark and light some pieces are so beautiful with soaring strings and waves they just melt you into your seat and some are quite dark and definitely leave you with a chill up your spine this exactly what I love about this artist!

So onto your links I have compiled Both Reload's Infonet releases the "Collection Of Short Stories" album and "Auto Reload Vol. 2" EP in one file. Both are taken from my own CD's at 320KBPS and the "Auto Reload" CDEP contains 2 bonus tracks not on the 12" vinyl.

EP's #1 contains their debut "Reload" EP "Auto Reload" & "Biosphere" EP's the former 2 are what I mentioned earlier about more abrasive techno sounds but the "Biosphere" EP is where you find the band starting to develop the more lush electronica sound I described These 3 EP's were remastered for a vinyl compilation release this file here is taken from a CD promo of this released by the band
EP's #2 contains the "Amenity" EP from 1996 and "Archives" EP from 1997 these are from what I can gather taken from vinyl rips. Also enclosed is a set of remixes done by µ-Ziq that were never used and only released on Mike Paradinas (µ-Ziq) soundcloud page. For me this was as match made in heaven as i have wanted to do a µ-Ziq post but his discography is almost as bad as Aphex Twin!!! These remixes are great and unavailable elsewhere as I think Mike Paradinas took them down from his soundcloud page.

So there you have a full discography of this great artist all their releases are out of print and I had to pay near £20 to replace my Reload "A Collection Of Short Stories" LP with a CD the vinyl goes for nearer £100 I have saved you a lot of money here!

This Write up is getting a bit long now and I'm sure confusing as dealing with these multi faceted/endless sub project artists are so I shall try to be brief here!

Global Communication for a brief shining moment were an artist who really did gain a lot of attention for their debut album I am going to be even lazier again and give you the internet version of events.

"Global Communication was a project begun in 1991 by Mark Pritchard and Tom Middleton. Middleton had previously worked with Aphex Twin (appearing under the name of Schizophrenia on Analogue Bubblebath by AFX); Pritchard was a one-time guitarist and DJ. Following a series of singles and EPs on their own Evolution label, their first proper album together was A Collection of Short Stories under the name Reload in 1993. Soon after this they released the Incidental Harmony / Sublime Creation EP, considered to be their manifesto. In the same year they produced the album 76:14, now widely considered to be a landmark ambient album. Tracks were titled by their duration, with the intention of not wanting to colour the experience of the listener. However, when a track was later issued as a single it was given the more marketable title of "Maiden Voyage".
In 1995 a compilation of their remixes of other artists' work was issued as Remotion, followed in 1998 by the reissue of Pentamerous Metamorphosis - an album of remixes, or "retranslations", of tracks from Chapterhouse's Blood Music dating from 1993 (and previously only available with initial copies of that album).
Later releases by the duo saw them moving away from the ambient template of 76:14 to produce funky house and dance music until they went their separate ways in 1998. Currently they work separately: Middleton under the name of Cosmos; and Pritchard mainly as Trouble Man and Harmonic 33.
In 2005 The Guardian newspaper named 76:14 as "the best ambient album of the nineties," and this was followed by a reissue of the album with a bonus CD of non-album tracks."

SO that pretty much covers Global Communications for you.In the links below you have the Expanded 2 disc remastered version of their INCREDIBLE debut album "76:14" which as it says above comes with a bonus disc which features most of the non album singles and other tracks which is nearly another albums worth of material in itself and makes this a near discography oif their recorded works.This is ripped from my own CD at 320KBPS I have also given you "Remotion - A Global Communications remixes album" This collection of remixes for artists such as Jon Anderson & Chapterhouse as well as more traditional electronic artists such as Warp 69 & The Grid is just fantastic it really does leave little of the originals and basically to my ears sounds like a further album of Global Communications originals!

So to wrap all this up your last link is "The Theory Of Evolution" this is a compilation album of Tom Middleton & Mark Pritchard's  Evolution records who have released many of the various aliases of these guys it's sorta a mix CD but also a compilation you get full tracks mixed into snippets of others and for me it's a great introduction to these guys works, it does not contain any Global Communications tracks I assume this is probably due to GC being on another label but it is a great listen though far more uptempo and dancefloor orientated than anything else i have presented by these guys here.

So that's that another electronica post where I have waffled for many paragraphs yet possibly failed utterly to describe the music. For me these posts are archives of a time long gone when electronica/IDM/Ambient music was fresh and new and it's a period very close to my heart and I like to hope that either old middle aged guys like me or young un's looking for some history will come across these posts and find easy to digest chunks of this amazing music! Also the albums contained here are collectable on both vinyl and CD and also out of print not that they would be hard to find but htey are NOT cheap. So here you have it free of charge get in your favourite armchair hit play and melt away!

THEORY OF EVOLUTION COMP - Mediafire
Posted by Dave Ballantyne at Tuesday, May 12, 2020