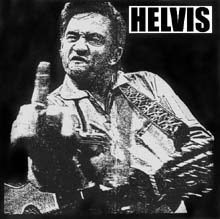 Helvis were a UK band that existed from 1998 - 2002 they did one album "Reverend The Sacrifice" and one EP "Genocider" and featured future and ex members of Black Eye Riot, Urko, Iron Monkey, Geriatric Unit, Hard To Swallow, Acrimony, Sigirya just to name but a few! and featured famous UKHC stalwart Bloody Kev on vocals who i think has been in every UK hardcore and metal band! Anyway these guys are another overlooked gem I always avoided them cos of the name as I FUCKIN DESPISE ELVIS and cos i thought they'd be one of those rockabilly punk bands HA! how wrong can you be! This is some seriously fucking chunky rocking hardcore metal these guys would've fitted easily on the bill with the likes of Iron Monkey, Raging Speedhorn or Charger (Bloody Kev would later replace Frank Regan in Raging Speedhorn!) Featuring Rat from The Varukers on Helvis cover of their "Nothings Changed" you know this is a metal band with their roots in crust and hardcore! I'm not gonna blab anymore about this this is a great album that swings from Fast and heavy d-beat to great big slabs of monolithic Early Sabbath style riffage!Thick heavy guitars and great production throughout all of it delivered with agression and sheer bloody mindedness! If even one of the band names I mention in this post mean owt to you you should be on your way to downloading this right now! A BEAST of an album!

I have given you a 320kbps rip of their one and only album "Reverend The Sacrifice" and I've also stuck debut EP "Genocider" (Pictured above) in the file as that's their entire discography. "Genocider" is taken from a vinyl rip but it's good quality and you have to hear the utterly nuts closing track "Alright Boys" which features cut ups of answerphone messages from 2 insane Venom fans left for someone involved with Venom i assume cut up and laid over some music the guys making the calls are nuts and need locking up it's hilarious! Anyway enjoy this as it's another overlooked GEM if you're not grinding your teeth and smashing your head into the stereo by the time you're through the first song you're defo reading the wrong blog! An any band who puts Johnny Cash givin the finger on their record is fucking cool END OF!

Note you can get the CD of "Reverend..." on amazon for around £3 if you want a proper copy!
Posted by Dave Ballantyne at Saturday, March 09, 2013