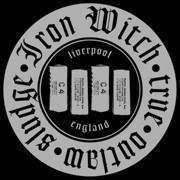 Whilst playing with Skitvarld i noticed that the guitarist Mik had an Iron Witch sticker on his guitar and I don't know why but whenever the word "IRON" is used in a band name it always gets my attention I did mean to get round to checking them out but it took me a month and a couple of other people to mention the name before I finally got round to doing it and FUCK! was I kicking myself for waiting that long!

First off I had not realized that Iron Witch were a local band based in Liverpool and to have such a great band on my doorstep for about 2 or 3 years and only be finding out about them now!! ARRRGGGHH!!
Iron Witch have given themselves the "sludge" tag, whilst I would agree with this in part because this is dirty,heavy,nasty music with some seriously gnarly vocals I personally find the majority of "sludge" to be boring repetitive and generally just washes over me and leaves me yawning! However this is not the case with Iron Witch because whilst the music is obviously rooted in that style what lifts Iron Witch above the majority of "sludge" bands is their sense of groove and their memorable songs what I mean by that is whilst most of the "Sludge" type stuff moves at a crawling pace and is content to let a riff hang in the air for half an hour whilst you nod off to sleep Iron Witch do not! Yeah sure they have slow songs and fucking mountainous slabs of heavy riffage by the bucketload but they also have the sense to give some of the songs a groove that gets your head nodding in the best tradition of something like classic Ozzy era Sabbath or "Our Problem" era Iron Monkey before laying the hammer down and pounding your head in! I would hesitate to use stoner to describe these guys as they are way too nasty but that's the kinda vibe i get from the groovier riffs although when i say stoner I mean stoner that is distorted to fuck and dragged through the swamp kicking and screaming all the way!

I hear all sorts of bands in the sound of Iron Witch as well as the aforementioned Sabbath and Iron Monkey I also hear little bits of the likes of Eyehategod, Grief, 13, Sleep, St Vitus etc in there as well as the fact these guys have definitely listened to Side 2 of "My War" often! Whilst these are only my small reference points to give you an idea of what to expect at least they are putting me in mind of the absolute cream of sludgy bands and not all the fucking send you to sleep boring ones and i do think Iron Witch have something more to offer than just a combination of influences Re-interpreted and really are bringing something new and great to this type of sound! They recently posted a version of Discharge : "State Violence,State Control" on soundcloud and along with the nod to the Black Flag bars on their "prospect" T-shirt to my mind shows that they have good influences outside the sludge scene which is no bad thing!

I would be hard pressed to single out any one release by these guys for extra praise as they are all good and though there is obviously a progression in writing, playing and sound with each release they are all consistently great Although I am a sucker for the awesome riffing in the title track of their "Single Malt" EP (not only cos it's a great song but also it's a tribute to the finest export of my home country!) and "Gunshot Residue/Exceeding The Dose" from the "Post Vegas Blues" 7" just makes me grind my teeth and want to wreck shit, there's not a bad song out of the 13 tracks across their 4 releases.

All of the the music I've below are available at bandcamp for £1 a piece but I was very generously given permission to link them up for you free here which I'm happy to do but I would really be pleased if you would go show these guys a bit of support and go buy some from bandcamp or get one of their shirts or buy a record because although they were kind enough to let me put this post up for you, recordings cost money and if we don't show some support to great smaller bands like these guys then they will cease to exist! And i paid for all these downloads so that i could put them up for you here and it was £4 well spent and most of you would probably spend that on your damn lunch!

I Cannot recommend this band highly enough not just because i love the fact that they are a local band but also because they are really fucking good! if i had come across these guys with no prior knowledge their great music would have had the same effect as it did anyway which was to totally floor me! Go get em folks I guarantee your satisfaction!

There's your free music but here are some more links for you go show them some fucking support don't just take the music and flip them the bird!

Bandcamp page is HERE you can contact the band to find out if the 7"'s are available or actually pay them some money for their music.

They also have a new song on a split 7" with Atrocity Exhibit which is out real soon you can stream it at the bandcamp page but I'm sure you will want to buy one so make your enquiries/pre-orders here - http://www.witchhunterrecords.bigcartel.com/ these guys also sell their "Single Malt" CDEP 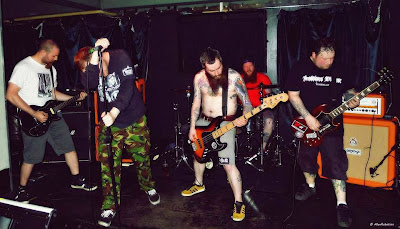