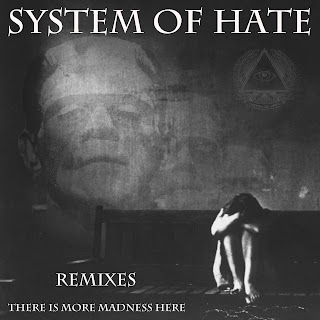 The remix album can be a minefield often released as a stopgap or a bonus it often becomes a throwaway, a bit of a lark really. However here Barnsley post-punk band System Of Hate present a double CD of remixes which are less remixes and more of an epic reimagining of the entirety of their debut album.

This double set clocks in at well over the 2 hour mark and contains 29 tracks so there's certainly a lot on offer, however the versions here are far from boring or self indulgent and I found myself engaged throughout. Whilst there's plenty of variety in the various styles of the remixers what I really liked about this album is whilst each remixer adds their own individual flavour to the tracks none of them stray so far from the original that it becomes unrecognizable or offensive which is something I find irritating about remixes sometimes. Be in no doubt this collection still sounds undeniably like System Of Hate!

I have to be honest I am ludicrously underinformed here so most of the names present here are a mystery to me, two that I did know were Irish rockers Therapy? and ex Amebix/Zygote member now solo artist Stig C.Miller. This however doesn't matter to me in fact I'm kinda glad I can listen to this with no expectations or prejudices. So onto the music. And with so much music on offer I don't want to bore you by going in depth on each individual track but let's talk about some highlights.

Opening track is a brilliant take on the title track by The.Webb where they have added their own vocal in a sorta anarcho/rap sorta style that put me in mind of early Chumbawamba (pre-sellout) Mat Thorpe's mix of "In The Shadow Of The Cross" was brilliant I loved the way he brought the keyboard sounds to the front and messed with the rhythm a little creating something that reminded me a little of that traveler techno sound the likes of Eat Static were doing back in the 90's though in this case without the repetitive beats. Batboy Slim (great name) does some great stuff with "Tears Of Blood" replacing the live drums with a pulsing 808 type beat and adding a stunning minimal piano motif that really heightens the emotion, bringing the guitars in and out of the mix to punctuate it really well! The Immigrant Brothers POUNDING take of "System of Hate" mixes the drums to punishing effect and loops the vocal in places to provide a fantastic rhythmic feel that really blasts out of the speakers with the driving key stabs right behind it! Brian Featherstone's "Black Fire" takes what was originally a fairly blistering number and turns it into an absolutely MASSIVE dub piece shorn completely of it's guitars and is blissful! Dale Farrow adds a nice 80's sounding brightness to "Rising" which I really liked.The aforementioned Stig C Miller mix of  "We Who Walk with God" adds an extra layer of bite to an already ferocious track and. Syd 3.1's take on "Rising" builds so well that by the time it was peaking so was I ha ha!I will be honest with so much on offer there were a couple of things I didn't like for example the Drum and Bass reworking of "Your God is Dead" by Dale Evans for me didn't really work very well and Scott Doonican's take on "There is No Madness Here" was a little bit too jaunty and a bit heavy on its continuous fast piano type motif . but considering the amount of material on offer here a couple of minor blips and they were minor, is no big thing really.

I feel like I can't really give you the full feel of the whole thing here because there is so much of it and I would love to talk about each track individually but who's gonna read that essay!!!. This collection is no haphazardly thrown together job, this works really well in it's order as a cohesive album and peaks and troughs just perfectly and I know for sure I will be revisiting this often.

This is a fantastic set I was initially dubious about a double set of remixes and imagined sitting here facepalming thinking WHHHHY??? I couldn't have been more wrong the remixing is sensitive to it's source material and as I said each individual remixer adds enough of their own flavour to each track to make it interesting and different but retaining the core sound of System of Hate's originals and not detracting from it but really enhancing key elements and bringing some other elements to the front that maybe were not as apparent on the original which not only makes this lengthy set entirely compelling but is also going to make my next listen to the original album very interesting.

You can get this set for£10 from the band (inc UK postage UK) contact Pat at Six67promo@hotmail.com

System of hate bring you another blinding release and if you ask Pat nicely he might be able to do you a good deal on their incredible debut "Unhallowed Ground" & The original "There Is No Madness Here" I guarantee your satisfaction!
Posted by Dave Ballantyne at Thursday, February 25, 2021 4 comments: