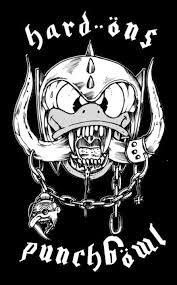 Australia's Hard-Ons have been a band I have had a soft spot for for decades I was introduced to them around 1986/1987 when my good friend Brian received a tape of all the early Hard-Ons singles from none other than Mitch Dickinson of Heresy/Sacrilege/Unseen Terror fame back then and they were one of those bands that although they didn't sit well with my thrash/hardcore sensibilities that you could not help but fall in love with! They were always pegged with the "Australian Ramones" tag however i just never saw that and maybe it's just me? I am a huge fan of the Ramones but I hear very little of them in Hard-Ons sound, I always thought they had more in common with melodic hardcore bands like Descendents or The Stupids. and classic rock like AC/DC, Kiss etc. and having been releasing records for 30 years come next year and continuing to stick to their trademark sound regardless whether there was an audience or a place for them is a testament to their commitment and the fact that these guys are some brilliant musicians and songwriters.

I feel that going into a huge rant about the Hard-Ons music and history is not necessary this post is in the spirit of shorter write ups more music, I just discovered this week that Citadel records keepers of the garage/punk flame in Australia had since 2012 been reissuing massively expanded editions of the early Hard-Ons material these reissues are apparently a series of 5 and so far 4 have seen the light of day now i could have hung around waiting on the 5th before doing this post but these 1st 4 expanded versions cover the entire period of Hard-Ons from when i originally heard them ( Their early singles and debut mini album "Smell My Finger" 1985) up to the point where i stopped following them ("Yummy" 1991) not that they disappeared in 1991 or started making shit records they just kinda seemed to become a bit less popular and a bit quieter globally as i say they have continued to release  great records all the way from then up to 2010's "Alfalfa Males Once Summer Is Done Conform Or Die" however it's the 1985-1991 period that holds the most interest to me because i was there at the time they were released.

So the reissues well the albums covered are "Smell My Finger" (1986) "Dickcheese" (1988) "Love Is A Battlefield Of Wounded Hearts" (1989) and "Yummy" (1991) however each album has been expanded beyond what any fan of any band could ask for, each double CD contains anything from 51 tracks at shortest to 66 tracks at longest these 4 reissues pretty much cover every scrap of released and unreleased material from this entire period including every single and EP  every Session and a ton of live stuff to boot! I have done my research and believe me NOTHING is missed plus it's all remastered as well!!

But you may be asking why? why would i bother to do a post on this band? well the simple answer is this... I had a FUCK of a hard time downloading these for myself I spent the best part of 12 hours over 4 days finding and downloading these and when i did i had to download them from various fucking BASTARD hosts like uploaded, rapidgator,turbobit y'know those total bastard hosts that take over an hour to download one disc of a 2 disc set and only allow you one download per 3 hrs so you download one disc of the set and then have to wait 3 hrs to do the next then because they were big files it took HOURS to upload em as well? So i say FUCK THAT to all those fucking horrible sites and hosts here are the 4 expanded and remastered Hard-Ons albums no captcha's, no wait, no fucking around and you can do simultaneous downloads you can have the lot in about half an hour max! This post is here simply because i really like the Hard-Ons and especially this period of their music and so that anyone else either the curious or the long time fan instead of spending 12 hrs like i did finding them and downloading them can just come here and help themselves to the ridiculously complete 8 CD's of PRIME Hard Ons material in a matter of minutes also as per usual UTS standards these are all presented in glorious 320KBPS quality too!

So below are your links they are large files but I decided as i can upload larger files that I'd not break them down into parts and trust me if you are a fan of the Hard-Ons then these are the definitive reissues there's nothing missed and SO much added and the quality is brilliant! so here it is for the diehards the ENTIRE works and more of the Hard-Ons from 1985 - 1991 I wish more bands would do reissues like these as they really are just great and they may not be the most popular or serious of bands but hey someone must want these they wouldn't bother going to all the trouble of remastering,expanding and re-issuing them otherwise. So..Here they are! Enjoy..

Love Is A Battlefield Of Wounded Hearts - Mediafire 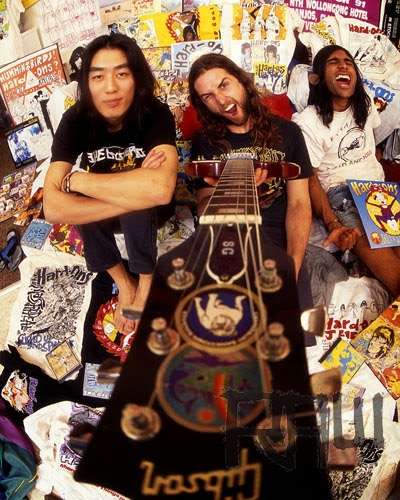 Conjuro Nuclear from Barcelona Spain are an unusual and compelling band I often get notifications from the awesome http://www.cvltnation.com/ site of their regular feature "6 bands you MUST hear this week"  where they put up 6 bands generally from bandcamp and review them and because of cvltnation's wide ranging tastes in dark and unusual music i usually listen to theem all and if there's anything I like i check them out further although they generally put up the heaviest of doom and sludge and the bleakest of black metal sometimes you get the odd gem and Conjuro Nuclear are one of those gems.

It is hard to describe the sound of these guys because it's a mix of styles that is quite unique blending shades of VERY old school black metal (think early Celtic Frost or "The Return" era Bathory) with keyboards/synths that along with the basic beats add a definite psychedelic feel and a touch of something like 70's horror movie soundtracks and very occasionally delving into an almost 80's pop synth sound and coming out with an utterly amazing and completely unusual sound. Whilst my above description may seem like the sound would be a bit messy they put it all together well also the vocals are mixed low but are kind of an ethereal sounding bark which again harks back to the black metal influence i mention before but nowhere near as brutal as you'd get with most of those terrible shrieking corpse-painted fools from the majority of black metal! There's plenty of thrashy atmospheric riffing and accents which would satisfy the fans of things on the heavier side but as i say the keyboards are as prevalent as the guitar so this prevents this falling into total black metal territory.

I can't tell you much more about this band their facebook page,bandcamp and net presence are all quite low key and my description may be a little "off" but I find these guys to be a totally compelling listen they have not left my media player since i downloaded them and i have returned to their music often as i think these guys have hit on a combination of sounds and instruments that is highly memorable and sounds very little like anything else and combining modern psychedelic sounds with the riffage of early proto-Black metal is just inspired making them something that both fans of heavy and non heavy music can enjoy!

They have 2 "albums" available free on bandcamp (I feel weird using the term album when there's no vinyl or CD but they have issued both of their recordings as cassettes) and both are great but I have listened to their latest self titled album from this year more than their debut but trust me there's not much in it between the two they are both consistently great I have mentioned Black Metal a few times in my description do not let that put you off as I'm talking REALLY old school sound here there's not a 1000mph blast or a hell raising shriek anywhere on these albums and they are definitely to my mind a far more pleasant listen than anything from that scene. Here's your links as i say they are both free and well worth your time to check out, do yourself a favour and give these guys a chance because you are unlikely to hear anything else like this and i am positive it's something readers of this blog will be glad i put them onto....

Posted by Dave Ballantyne at Saturday, August 16, 2014 No comments: