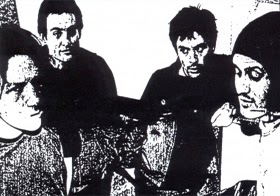 San Francisco's Dead And Gone are one of those unique type of Hardcore bands that don't come around often and seem mostly confined to the 1990's era I have often used them on here as a reference point for some of the more interesting hardcore i have posted on here but I had not listened to them in quite a while and decided after digging out their discs that a post was definitely in order! Formed from the ashes of the bands Filth, Blatz, Jack Acid and Special Forces the members of this band had a grounded history in the Bay Area hardcore scene centered around the renowned Gilman Street scene. Formed in 1993 and debuting with a self titled 7" EP in 1994, listening to that EP whilst there are some fairly unique touches to their sound it is very reminiscent of something like the first 2 Neurosis albums (and recorded by Noah Landis who coincidentally had just become a member of Neurosis at this time) whilst the EP has a good clear sound it lacks a little in bottom end and whilst good hardcore with some "different" touches was only a small indication of what was to come. Next release the "TV Baby" 12" on home of the best hardcore and crust coming out of the U.S. Prank Records took the sound of the debut EP and expanded it further there are some great twisted melodies and bass driven tracks on here but to my mind the early Neurosis influence is still quite prevalent and the production is still lacking a little but you can see that the band are working hard and developing their own sound with some atmospheric spoken parts and some great song structures and dynamics that are quite unusual for hardcore and the music is definitely a good bit more complex than your average hardcore band with plenty of twists and turns that keep your attention! However after joining the vast Alternative Tentacles family for their debut album in 1997 the band unleashed "God Loves Everyone But You" which through the wide distribution and reputation of AT and a sound that is wholly original is the album that brought them to the attention of many! "God...." is a great album i don't know if it's the better production or just that the band are progressing further but this is one great listen whilst again you can still hear elements of early Neurosis, Black Flag & BL'AST! in there their quirky take on the style is something wholly their own, whilst the sound is still familiar from the EP & 12" the production on this release is way better giving the band a much richer sound than on the preceding releases you can also hear so much progression there's more of the melodies i mentioned on the first EP and some effects on the instruments added here and there and used well with great dynamics plus the drummer is all over his kit filling out the sound with some great and original drumming! I can't state enough that while there are some straight up hardcore parts mixed in with the more complex parts that there's just no real benchmark or comparison for these guys! This is an album that takes you on a twisted journey from start to finish with some dark and atmospheric parts that also put me in mind of noise metal crazies Today Is The Day albeit without the crushing heaviness of that band! This album is an interesting listen and because of the variety of pace and dynamics on display it really does keep your attention throughout. Now at this point in 1998/9 something kinda weird happened Dead And Gone broke up and reformed with a slightly different line up and a different singer and changed their name to Creeps On Candy who released one album on Alternative Tentacles now I can tell you very little about this band as I have never owned the album and although i was vaguely aware that Creeps On Candy were related to Dead And Gone i had no idea how closely till i started researching info for this post however I downloaded the album to have a listen this morning and having had a listen to it  i would say it's not a million miles away from what Dead And Gone were doing however the sound of Creeps On Candy is more leaning towards a punkier noise rock type sound more suited to the AT label's style of unusual bands and a lot less dark and twisted than Dead And Gone were, I'm about 10 mins into listening to Creeps... album and I like it a lot however the d/l I got is only 128kbps so whilst an important part of the bands history I will save that for another time if i can lay my hands on a decent quality copy I may update this post sometime. So Onwards....

In 2000 a new Dead And Gone double 7" appeared called "Shiny And Black" (why a double 7" as the 4 tracks could have just as easy fitted on a single 7" as they are quite short) what else is quiote unusual about this is that it was released on home of quirky "hardcore" Gold Standard Laboratories a label co-owned by The Mars Volta/At The Drive In member Omar Rodriguez Lopez and was home to a ton of apparently influential bands I have heard SO much talk about but have had no interest in such as The Locust and Mohinder, anyway all 4 original members of Dead And Gone were back with a new record as i said you get 4 songs of which the longest doesn't quite hit the 3 min mark however these 4 songs are all intense and powerful numbers the deep noise rock type bass underpinning an utterly shredding sound taking the sound of "God Loves..." into new and far darker and more frantic places than even that album! A blistering return for this great band! So it would be a further 2 years till 2002 before we would hear anymore from these guys and still with Gold Standard Laboratories they released what would be their last album "The Beautician" with 13 songs clocking in at a fairly short 28 mins it would seem this renewed Dead And Gone had totally dropped the more expansive numbers from earlier records and going for an altogether more compact and frenetic sound whilst the sound is still undeniably Dead And Gone i would say that they have now moved away from their punk/hardcore influences and had a sound more akin to the bands like Unsane or the heavier, more mental early releases on Amphetamine Reptile records like Surgery or Helmet (THAT is what I mean by "Noise Rock") however as i said it is still undeniably Dead And Gone the great drumming and dynamics are still there along with the more atmospheric parts and bass driven parts too, Dead And Gone had always been a progressive band and unafraid to utilize different elements in their sound that stray far from what is generally accepted as "hardcore" and this album is definitely a logical progression whilst there are odd breathers here and there for the most part the album is uptempo and a solid wall of sound that will completely floor you! However unfortunately this would be their last album and i have no idea what the band members are doing now if anything because info is really sparse on this band I do know that one of them went on to join that other great hardcore band Talk Is Poison (See my post on them HERE) which is a real shame as where this band could have gone next who knows!

So I present you here the entire recorded works of this great band all of them ripped from my own CD's at 320kbps except "Shiny & Black" which is a vinyl rip as it has never been released on CD, go check these out if you are a fan of bands like Talk Is Poison, (Early) Neurosis, Econochrist, Devoid Of Faith and you like your hardcore to do what hardcore is actually supposed to do which is go AGAINST the rules where most hardcore sticks to that music's rigid, self imposed restrictions and narrow sound, Dead And Gone do not. It really is a shame more bands don't take the kind of off the wall ideas that Dead And Gone had and run with them because hardcore as a genre would be far more interesting if there were more bands like these. Enjoy!

God Loves Everyone But You - Mediafire

The Beautician - Mediafire
Posted by Dave Ballantyne at Tuesday, March 25, 2014