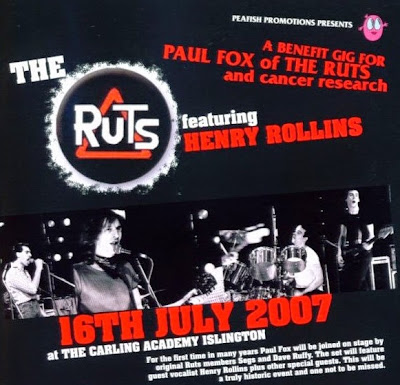 So some of you maybe familiar with The Ruts but i find it surprising how many times I mention this band to people with good taste in music and they say they know their biggest hit "Babylons Burning" but that's about it! The Ruts in my opinion were one of the finest bands from the original late 70's era of Punk and are easily the equal of their more famous contemporaries like The Clash, Pistols etc. The Ruts however did have some bad luck they fired their singer due to his drug addiction and he died soon after of a heroin overdose, they continued through the 80's and to this day as Ruts DC with a more dub orientated sound.

Henry Rollins has made no secret of his love for The Ruts and has talked about them often in his spoken word shows, so when guitarist Paul Fox was diagnosed with terminal lung cancer in 2007 and they decided to do one last benefit gig for Fox's family and cancer research and who else could they ask to step in on vocals but one Henry Rollins, their no 1 fan! So having got together to rehearse the set on 16th July 2007 they played a short set (Due to Fox's ill health) in Islington London which was documented on DVD but what I was surprised that there was no audio of this ever released so I took upon myself to find the video of the whole set and make an audio version, now it turned out OK however it's lacking a little in bottom end and Rollins vocals are a bit too high in the mix all in all it sounds like a VERY high end audience recording or a decent soundboard tape however this is a moment in music that can never be repeated and deserves documenting.

So I was going to do a longer write up, but on the subsequent spoken word tours Rollins did after this a portion of his set to talking about his love of The Ruts and also talk about the experience of this collaboration so rather than bore you with my words though it has never been officially released I have managed to get audio of Rollins talk on The Ruts and I have enclosed that this in the file.

So below you will find the full Ruts set with Rollins on vocals plus the whole section of spoken word that Rollins did about the experience all in one file so what I would suggest you do is kick back with a coffee or something listen to the spoken word part and then listen to the set, both are a GREAT listen because what better way to hear the story than from the man himself he was there after all and if you know Rollins you will know he is the MASTER of documentation and it's an  entertaining, funny and tragic tale well worth 40 minutes of your time!

The Ruts were a phenomenal band dogged by tragedy and I feel they never really got their "shot" at success because of this they wrote great tunes had great musicians in the band and it really is an utter shame that a few studio recordings some singles and one album is all that they left as their legacy and I strongly recommend, if you have not already, that you check out their album "The Crack" it's a stone cold fucking classic! I'm really glad Paul Fox got one last chance to play with the band in front of a large and enthusiastic crowd and for his peers as well! So go enjoy an earful of Rollins and a set of great tunes from The Ruts with Hank singing because i doubt you will find this unique little package of music and words anywhere else! R.I.P. Paul Fox & Malcolm Owen. 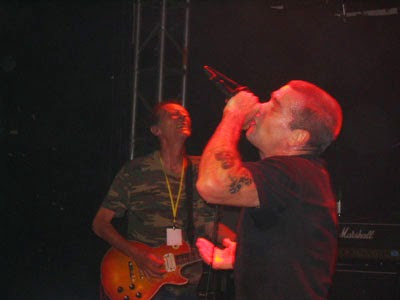 BUY the DVD - HERE (All profits go to charity)
Posted by Dave Ballantyne at Sunday, February 07, 2016