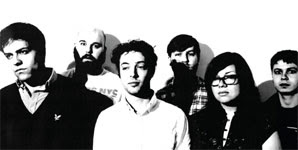 Canada's Fucked Up are probably a band that divides opinion when they first arrived on the scene in 2002 they were a real breath of fresh air mixing the best elements of old school hardcore and British punk and giving it a unique and contemporary edge, top that with the throaty Negative Approach/Neg Fx/Slapshot style vocals courtesy of HUGE frontman "Pink Eyes" (aka Damian Abraham 2nd from left in pic above) and you have Fucked Up!

Starting out on the home of all things fresh and original in hardcore Canada's Deranged Records after a slew of singles their debut album "Hidden World" was co-released on Vinyl by Deranged and the CD was released on the huge Jade Tree Records. After the debut album in 2006 they signed to Matador records probably the kings of indie and underground eclecticism in the U.S. where they remain till now, however, this has not prevented them from releasing many singles on a variety of small independent global labels.Whilst their sound has become more and more accessible over they years they have not strayed too far from their original "Hardcore" blueprint however there has definitely been a heavy dose of influence from outside the small world of hardcore and they have definitely injected more than a little melody into their sound over the years! I saw a teenage kid in my place of work which is in the ass end of nowhere Merseyside wearing a Fucked Up T-shirt the other day thus is the vast reach of their popularity!

They have had an extremely prolific career over their 11 or so year existence with 4 studio albums 3 live albums various compilation CD's as well as a few Fucked Up mixtape cassettes and more than 40 singles to their name and of those 40 singles many have received releases on several different labels as well as in multiple language formats and multiple different versions for various locations worldwide for example their "Year Of The Snake" EP was released on 3 different 7"'s for the UK, US & Japan as well as it's 12" format each with a different version of the A-side and a B-side unique to each release! So to say their vast singles Back catalogue is confusing is probably an understatement the band themselves have said that they release vinyl in this way to have an interesting back catalogue and not just release CD's like every other band and to give something special to their fans. I started out collecting their stuff back in 2002 and gave up trying to keep up after about half a dozen singles as they have never had an official website just a vague blogspot and their immense popularity ensured that their single releases sold out quickly.

However thanks to my extreme trainspotting tendencies and the good old users of the internet i have managed to download and round up pretty much ALL their single releases up to 2010 in all their multiple versions etc but at the 2010 point I gave up it just became mentally draining trying to chase down their singles as even tho i've rounded up all the singles from 2002 - 2010 there's been a further 12 (!) singles since I stopped and they never seem to stop coming so 2010 was as good a point as any to stop and though I love Fucked Up's original take on hardcore/Punk I have to say that the further back you go in their catalog the better they get but that's only my opinion!

So as I've always been a lover of singles and I got such a great response to my Melvins singles overload a few months back I decided i'd do a couple more of these singles posts as i find a lot of great bands that love vinyl view the single as a platform for releasing great non album tracks or B-sides and often they never turn up anywhere else but on vinyl. So what do you get here? well let's begin....

First off please note that due to the wealth of material they have on singles and file uploading size restrictions on mediafire i've had to break this load of stuff into 5 parts!! below i'll give you a list of what's in all 5 files so you can decide which if any you want, I've tried as best i can to do them in chronological order however in some cases it just wasn't possible due to the various file sizes,so here goes....

Now I know it may seem that these separate parts are going from the crammed to the very sparse however the series of "Year Of...." 12"'s are epic length, the tracks ranging from 15 - 22 mins in length the "Year Of The Tiger" 12" is 86mb on it's own and as i've tried to keep the files to around the 100 mb mark hence the reason they get sparser as they go on. and as i mentioned twice there are 4 versions of "Year Of The Pig" in there!

I've not gone into a big description of this unique hardcore band's sound because it is unique and because this post is really of interest to die hard fans of the band and is maybe not the best place to start for anyone who has never heard of these guys however if you do fall into the latter category then here is a link to the excellent 2002 - 2010 Double CD compilation called "Couple Tracks" which is basically this post distilled down to it's bare essentials over 2 discs and it's a totally ideal place to start if you are not aware of this brilliant band as it contains the A-sides of most of the great singles all presented in chronological order, the link below is not my link but I have checked it and it's working so you can start here

As for the rest of you I'm sure I don't have to go into how important this band have been to the hardcore scene both in originality of music and in bringing a legion of new fans attention to the world of hardcore by not being afraid to try different new and fresh ideas and write utterly great and memorable hardcore songs! So here we go treat yourself to a quick and easy fix of their singles all lovingly researched compiled and tagged by me into their correct orders and releases and all of them come with their appropriate cover art as well!

One last note on your files these have been sourced from various places Their various singles comps, my own vinyl rips, net downloads of other peoples vinyl rips etc etc and in some cases say for example a 3 track single may have had all 3 tracks sourced from various different places so the sound quality and bitrate may vary but if you're gonna bitch and moan about that then you go round up their back catalog and see if you can do a better job!!

If you want to know more about this band then you can check out their own band run Blogspot for all the latest news and exclusives (They occasionally give you free mp3's etc) here...

If you just want to trainspot their discography then the best i can recommend is discogs page on them (This is where I got all the info i needed to track down and organise all the stuff in this post) here...

or you can try wikipedia but as all internet users know Wiki's not always 100% reliable but there is a wealth of info on there...

So that's yer LOT! here's your links to parts 1-5 of this awesome singles collection ENJOY! 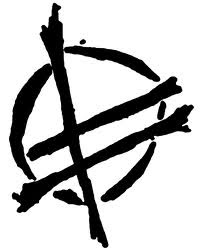