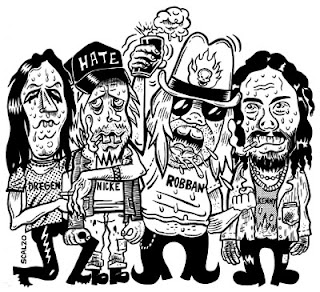 I mentioned in my post on Fucked Up (HERE) That I love singles and even tho I haven't had a record player for about 7 or 8 years i still like it when bands release a lot of 7" singles (as long as they are compiled or easy to download!!) Back in the original 70's punk days bands like The Clash would release non-album  7" singles and some of the songs contained on these would be some of the bands most revered work ("Complete Control" by The Clash being a perfect example) So enter The Hellacopters releasing near 50 singles over their 13 years of releasing records as well as 7 studio albums Split LP's etc to say they were prolific is an understatement!

The Hellacopters were formed in 1994 by Nicke Andersson (aka Nicke Royale - Guitar/Vocals) who was at the time the drummer (And also main songwriter) for Entombed originally as a side project from his "day job" however Nicke left Entombed around 1997/1998 to concentrate full time on The Hellacopters who are pretty far removed from Entombed musically speaking! If you don't know these guys then what you get is loud blown out overdriven Garage Rock with the emphasis on ROCK! The Hellacopters take as much influence from 60's garage like The Stooges and MC5 as they do say Kiss or AC/DC!! This is high energy Rock 'N' Roll in the finest tradition! I don't feel the need to describe the band any further if you're a fan then that's why you're here at this post if you're not a fan then this is as good a place to start as any!

Now as i said these guys have been prolific especially on the singles front but they have very kindly rounded up a heap of their early singles on their 2 compilations Cream Of The Crap Vol 1 & 2 but those comps maybe account for around a 1/4 of their singles output at the most! and the majority of their singles have been 7" vinyl with the occasional CD single as well but these guys are definitely lovers of the vinyl! So.. What i have done here is firstly take "Cream Of The Crap" Vol 1 & 2 and broke them down into their individual singles re-tagged and re-dated them and added their appropriate cover art, I was then lucky enough to find a fellow Hellacopters maniac online who had compiled 21 non album tracks from his personal collection into his own compilation so i broke them up too, again into individual singles etc the rest i sourced from various places over time till I finally had what i present to you here! This was a project i did for myself personally as i love Garage Rock and The Hellacopters are probably one of the best modern exponents of the style!

So what do you get? well as you know I'm fairly obsessive about compiling bands discographies, i do my research etc so this is pretty much a complete singles collection of this great band up till 2005 (the broke up in 2008 and the singles released between 2005 & 2008 were a bit less exclusive) You will find many album tracks as the A-sides to these singles but I felt that i didn't just want to post up B-sides and that i wanted to have each single myself with both it's A & B sides present. You will also maybe find a few repeats because as well as the 7" singles I've also given you their split's and some of the EP's where they compiled Single tracks etc but I thought I'd just give you it all and you can take what you want from it! I've basically posted this up because it was a SERIOUS mission to get all of this vast singles collection together and even with my research I'm not sure it's complete! I've tried to put this together chronologically as usual but I had to do a bit of Juggling to get it into files that fit my uploading restrictions.

So That's pretty much everything you could ever want by this awesome band rounded up in one fell swoop
** = "The REAL Cream Of The Crap" is my 13 track compilation of what was left over from the various other comps that did not have a place anywhere else and my research could not find out where they belonged probably compilation contributions or singles not listed where i did my research there's some great cover versions of Venom, Ramones and more non album tracks in there.

So like the Fucked Up post these tracks have been sourced from MANY different places and the bitrates and sound quality will vary but i've listened to it all countless times and there is nothing of poor quality in there at all however this is RAW LOUD BLOWN OUT fuckin Garage Rock and Punk so if you're expecting beautiful pristine production throughout you're checking out the wrong band! The production suits their music perfectly!

So there you go yet another singles bonanza for you, the Hellacopters albums are easy to find so i haven't posted them but these singles were a labour of love so I hope you guys enjoy them! if you're new to Hellacopters i recommend part 1 of these files as a good place to start but for the die-hards go get yourself a free few hours of Hellacopters utter Rock 'N' Roll Brilliance!