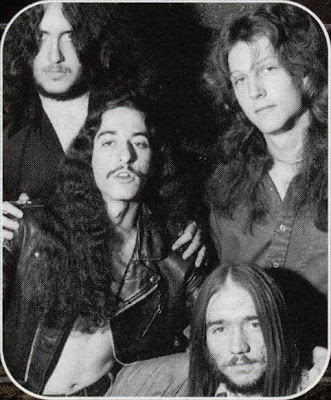 I have mentioned 70's rock a lot when doing write ups for various bands I even put up an explanation/almost apology at one point for using the description! However i remain unashamed of my love of GOOD 70's rock there's not a lot that can beat the first 6 Black Sabbath albums, AC/DC with Bon Scott, Thin Lizzy at their best etc etc however one band i never think to mention is Pentagram. There is a good reason for this because although Pentagram have had a career lasting some 40 years they were always more well known for being one of the earliest exponents of what is called "Doom" metal as although they had done a ton of recordings and 2 or 3 7" singles in the early/mid 70's they didn't get their debut album "Pentagram" (Also known as "Relentless")  out until 1984, some 13 years into their career by which time they had morphed into the style of doomy metal they are best known for and that has influenced a million bands. But in 2002 and 2006 Relapse records unearthed their earliest recordings from 1971 - 1976 and released them as the single CD "First Daze Here" and a further double CD "First Daze Here Too".Now don't get me wrong i am a fan of the doomy 1984 - present Pentagram but I was unaware until these "First Daze..." Comps came out that they had been going in the early 70's! I always assumed they like other exponents of Doom at the time like Trouble or Saint Vitus an 80's band!

Now I'm not gonna go into the vast 40 year history of the band vocalist Bobby Leibling's history of drug abuse and self destruction has been well documented both in print, online and now in the form of documentary "Last Days Here" so if you want to know why this great band never broke HUGE in the 70's or about their troubled history, revolving door of members etc etc then i suggest you do some research or watch the documentary (I've yet to see it myself) as I'm not gonna even attempt to try and relate it to you here as i have neither the time or the energy to give you page after page of exhaustive notes on this band, this once I'm going to stick to the music....

Now although i only mention the two "First daze..." comps above there was also another compilation of early material in 1998 called "Human Hurricane" but until i was researching this post I was unaware of it as it's on a Canadian label I have never heard of and from what i can gather did NOT have the bands approval. So what i present here is a fairly complete (as far as what has yet been released) collection of Pentagram's earliest recordings. Anyone who is a fan of Pentagram and has not heard this 70's stuff you'll be in for a shock this is a band very far removed from the same band that recorded bludgeoning tracks like "All Of Your Sins" from the first album and quite a few of these tracks have seen very doomy remakes on subsequent albums however for me these 70's era recordings are by far and away the best music they have done (although latest album 2011's "Last Rites" definitely seems to be leaning back to that sound)

So what you get are 4 CD's worth of utterly destroying 70's rock with a nod to their peers a chunk of serious GROOVE and a huge dose of originality if it hadn't been for Bobby Leibling's self destructive tendencies and drug abuse I think these guys would be stadium rockers by now! Songs like "Forever My Queen" , "When The Screams Come" and the utterly astounding "Be Forewarned" (there are a couple of versions of "Be Forewarned" on these CD's my pick being track 11 on "First Daze Here (The Vintage Collection) Are beyond good these guys were just something else apart from the obvious 70's styles of recording if someone had played these to me with no mention of their name or history i would've pegged them as a new and very highly original "stoner/retro rock" type band but the powerful riffage and great songwriting on display here is just amazing they managed to come up with great walls of chunky riffs but without sounding like Sabbath (who at this time in the early 70's would have been the only band to touch them for heaviness and great songs) Check out the riff to opening track "Forever My Queen" which just slays without being overly doomy or clunky. Top all this with Bobby Leibling's amazing vocals and an utterly amazing rhythm section and you have Pentagram. Bear in mind that back in the early 70's recording studios were beyond the financial reach of unsigned bands so in order to get someone to finance a recording you HAD to be Good and you had to be able to play extremely well who'd waste hundreds of dollars on you otherwise? and Pentagram certainly fall into that category the wealth of talent and utterly supreme and tight playing on display here for a band without a deal or a record out is just staggering

Onto the files... here I have for you both the single and double "First daze Here" comps plus i managed to unearth the "Human Hurricane" comp as well. These recordings date from 1971 - 1976 though as i don't own them i can't tell you the dates for any of the recordings I just see the whole lot as the early works of the band and they are so fucking great i really don't care either! the quality of the recordings varies from warm and great quality 70's studio recordings to some less clean and rawer demo sounding material the most consistent album is "First Daze Here (The Vintage Collection)" which has 12 tracks and sounds like an unreleased album and has great production, it's all great quality just some of the recordings are rawer than others but having seen the light of day in the early/mid 2000's by this time the analog masters would have been around 20+ years old so the fact that they even survived in this quality is amazing! Don't be put off as i say it's all good quality just some have rawer production than others these are definitely no "Completists Only" type recordings these are essential pieces of the history of a great band and in my opinion their best material If you're not grooving and head nodding by the time you get a couple of songs in then you really are beyond my help! Here's your links all 4 are essential and all are around the 220-256 kbps bitrate ( I had to split the Double CD into it's 2 discs due to file size restriction) Also note there are a few repeats of songs over the 4 discs but they are ALL different versions from different sessions and years ENJOY!!!