Ok so as you know I've been posting a bit of hardcore these days and recently i did posts on Bands related to the scene revolving round the city of Hamilton, Ontario in Canada (have a look at those posts on Haymaker, Cursed and Pick Your Side HERE) It's a fertlile scene and an incestuous one, the main players have been on the scene from what would seem to be it's inception and have been in various important and influential bands both in their hometown and globally. I have to admit this all started with the band Haymaker for me (see the link above their post is there)  and though I was vaguely aware of that bands history my knowledge is/was lacking a bit and the "Family Tree" of the scene is way too complicated one to get into but if you wish to do your own research as i did you should got to http://www.discogs.com/ and type in any of the band names from this post or the linked post and click on some of the members names to find out who's in what band etc. I have already done this and discovered that the 3 Bands that this post is about all pre-date Haymaker and feature members of that band so that being said and once again in the spirit of "shorter write ups more music" i will let you decide if you want to do your own research I've given you the links so that just leaves me to give you a brief overview of what's here and why! 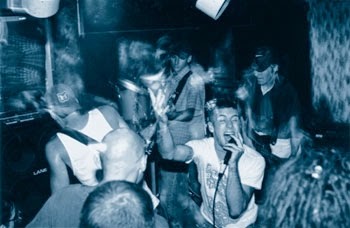 LEFT FOR DEAD - First off it has to be said that Chokehold were probably the band that started the whole Hamilton thing however their omission from this post although they are important for historical reasons is simply because i do not like Chokehold's music and I would not be able to give them an enthusiastic write up and this blog is for sharing music I like so even tho this post is about the history of the other Hamilton bands i have posted I would feel fraudulent uploading and sharing something on here i don't like so onwards... After Chokehold some of their members went on to form Left For Dead who to my mind were the first of the Hamilton bands to produce that really dirty,heavy, sludgy nasty sound that endears me to that scene so much, their brief existence from 1996 - 1998 produced a mere 18 tracks that were used on 2 separate split 12"'s and a split EP there was also a live 12" but I haven't included that because I don't own it and it's a vinyl only release! Left For Dead play in a similar vein to Haymaker heavy downtuned guitars fast hardcore with the occasional blast in there too, fronted by Chris Colohan (who fronted all 3 bands in this post) who's shredding yet youthful sounding vocals suit the music perfectly! Their brief yet explosive discography was remastered recently and I bought it so now that I had a 320kbps rip from CD I decided to share it with you, I had some pretty ropey vinyl rips of their stuff but it wasn't till i purchased this CD that i truly got why this band are so revered and why their influence on hardcore in their local scene and globally is so important! But the story doesn't end there i dunno what's going on over in Hamilton but 2013/2014 saw both Left For Dead and Haymaker return with new EP's Left for Dead's 2013 EP "1" contains 8 tracks of their trademark face ripping hardcore and shows that these guys have not lost any of their passion for hardcore in the years since they last played together and is utterly blinding!!! The link below contains the discography ripped from my own CD and separated into it's relevant releases all tagged with artwork and it also contains latest EP "1" which i got a vinyl rip of it's not as great quality as the other stuff due to the source but hey this is hardcore you can't expect the best quality all the time!!! 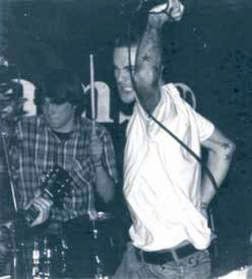 THE SWARM (A.K.A. KNEE DEEP IN THE DEAD) - Next up we have another short lived band The Swarm this was unwittingly the first Hamilton band i heard I bought their "Parasitic Skies" 10" simply on the strength of a review i read and when i heard it although it wasn't in line with what i was into at the time It was heavy and aggressive and i loved it! Carrying on pretty much where Left For Dead finished this has quite a similar sound to Left For Dead, Thick heavy Guitars great vocals (again by Chris Colohan) etc and if you liked Left For Dead then you will love this, They released only "The Parasitic Skies" 10" a split EP with Morser, a split Pic Disc EP with Force Fed Glass and a final EP "Ol' Blue Eyes Is Dead"between 1998 and 1999 and they were gone! The split with Morser was added as bonus tracks on the CD version of "Parasitic Skies" it was recorded at the same time as "Parasitic.." so in your file you get Parasitic Skies with the tracks from The Morser split all together then separate folders for the Vinyl rips of the split with Force Fed Glass and "Ol' Blue Eyes Is Dead" the latter 2 aren't the best quality but i include them in the file for completions sake, In fact even the CD rip of "Parasitic Skies" is a bit quiet even tho it's a 320kbps rip straight from my own CD I suggest you turn it up loud and let the discography of this brutally heavy hardcore band annihilate you!

The Swarm (AKA Knee Deep In The Dead) - Mediafire 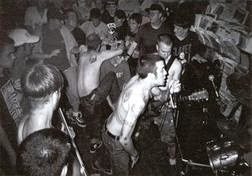 RUINATION - And lastly we get to Ruination who are a different prospect from the first 2 altogether I'm not sure what is going on with this band as they seem to have had their base in Ann Arbor Michigan USA (once the home of The Stooges!!!) However as well as being fronted once again by Chris Colohan (maybe i shoulda called this post Chris Colohan??) they also feature one Mike Haliechuk better known as 10,000 Marbles guitarist for Canadian hardcore superstars Fucked Up but also notable is the fact they have Ebro Virumbales in their ranks who has served time in such hardcore legends as Charles Bronson, Los Crudos and Punch In The Face and has quite the Rep in hardcore circles! Ruination only existed again a short while between 2000 and 2001 and released 2 EP's a Split EP with They Live and contributed 3 tracks to the "Deadly Sins" 7" Box set comp on Hater Of God records and they were again gone! As for the music well this time around it's a completely different style to the previous 2 bands these guys play more straight up Hardcore/Fastcore which is a perfect representation of the time it was recorded and reminds me of some of the better bands from this time such as The Rites (see my post on them HERE ), Cut The Shit, Snakebite (see my post on them HERE) etc. there's not a great deal of this kind of hardcore i like but these guys are definitely among them it's well played tight and infectious stuff! The link below contains their discography ripped from my own CD and as it's such a short discography i have left the bonus full live set that is extra on the CD in there as well I have lumped all their comp tracks together in one file tagged as Comp tracks plus the 2 Ep's and the split all separated into their own folders with relevant artwork. Enjoy

I wanted to say this write up and post is not really up to my usual standards but I did promise shorter write ups and more music these days and i am trying to stick to that, and linking together the history of the various members of these bands and the other Hamilton bands would be futile because i would just be regurgitating what i learned myself recently from discogs.com and i have given a link to that site many times and again in this post so you can do your own research the reason is not simply laziness it's because it's great fun to find out things for yourself and I am here to share the music mainly more than give in-depth histories as i would never claim to be an expert i'm just a decent standard trainspotter of music!!! I can't claim to have been in on the ground floor where these bands are concerned (with the exception of The Swarm who i came across by chance in 1999 and had no idea they would relate to music i would get into years later) i backtracked these bands simply by looking for more music like Haymaker!! one of the main reasons for doing this post and this has become a recurrent theme is when i did do my research and got downloads of Ruination and Left For dead I could only get 128kbps downloads which were shit quality and really detracted from what is cheaply recorded music anyway so because i liked them i wanted to share them on here especially as it linked to other posts I had done and I went off on the net and luckily both bands had discography CD's available so i bought both for my own pleasure and so i could do the bands justice by uploading better quality downloads here than were available online when i was looking for them and this is not the first time i have bought CD's with the idea of uploading them for my blog so that would be mainly for YOU the reader!!!! So I hope you enjoy some vintage hardcore and that after listening to these bands will see why they are important and why people still talk about them now! Hope you enjoy it!

So This Morning I was just browsing my blog as i do checking for any spelling mistakes etc and i decided it was a bit cruel of me not to give you more info on the Hamilton scene with these posts so i quickly put together a list of the main players and what bands they are in. Unfortunately without a serious research of my CD's and google i can't tell you who plays what instrument as some of them have played instruments in one band sung in another etc but here's my list of who is in what band (note Burning Love are a current Hamilton band who play a heavy brand of early USHC/Garage influenced hardcore i have not done a post on them yet and Our War were a short lived project by members of Haymaker etc again not featured on here as i don't have the one EP and  demo they did) also some of these guys are in multiple other bands that i know nothing about and have yet to investigate so I'm only mentioning bands I know about that they are in not everything also seems like a couple of them have played in Fucked Up at one time or another but I can't confirm when or on what they played. this is the basics...hope this is helpful.....


Jeff Beckman – Chokehold, Left For Dead, Our War, Pick Your Side

Chris Ansley – Chokehold, Pick Your Side

This is just the basic info I got from linking bands and names on discogs so DO NOT fucking push your glasses up your nose and give me a fucking "I think you'll find such and such was in such and such a band briefly..." my info comes from discogs so any mistakes are theirs not mine if you think my info is no good go start your own blog I've no time for geeky fucking know-it-all's tho any pleasant conversation is welcomed :-)