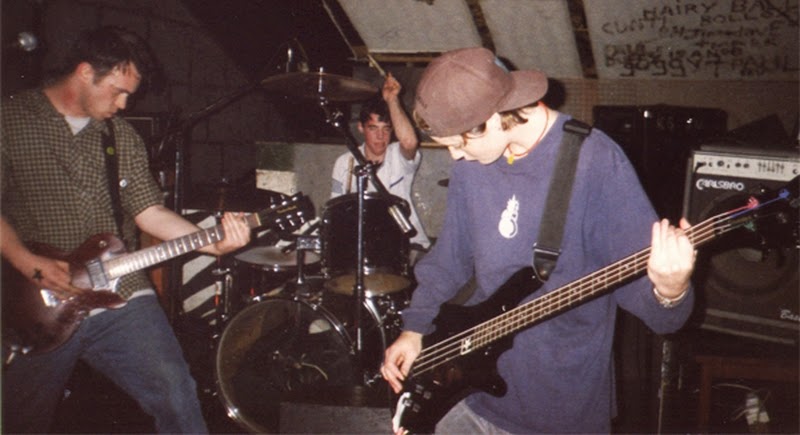 The Kabinboy from Ireland were an instrumental band who existed from 1998 -2001 and were oft compared to the likes of Neurosis but i don't see that comparison at all and I'm a huge fan of Neurosis and anything like them, though i wouldn't be surprised to see them playing on the same bill, I can't really describe them as, being damn heavy and instrumental there's not much to compare them to and they have a fairly unique sound, I do feel they have a slightly Stoner/Sludge type vibe to them but that again is not 100% accurate and selling them short.

They released 2 x 7"'s, 2 x split 7"s,a split CD and a 10" and that was them done & gone and due to the fact that most of their records or songs did not have any titles and were instrumental and the fact they were quite short lived and obscure it's almost impossible to find any info on the net about them..... unless you happen to be a trainspotter like me! I discovered these looooong after they were split up tho I was aware of them at the time they were around in the late 90's but back then there was no internet access like there is now so if you couldn't find it on a distro list or get to a gig then you were screwed plus they were quite popular on the underground at the time so it was impossible to get your hand on the records!

Anyway with much searching and a bit of buying i managed to round up of their tracks from downloads, vinyl rips and a rip of their awesome split CD with John Holmes (Another GREAT UK hardcore band that split up) This kinda thing is what this blog is all about putting things up that are obscure and rare and took me days and hours of surfing to find and/or buy so that you can have them with the click of a mouse! You could call Kabinboy hardcore or metal or whatever you like but they are one of those rare bands that really can't be pigeonholed. All i know is they created a big buzz when they were going and i can assure you it's well deserved.

About this file it contains everything they released, Here's your tracklist...

They are taken from my own vinyl rips a couple of downloads i found online a 320kbps rip of the split with John Holmes a youtube video that i ripped mp3 from and 1 track I managed to buy a download of from amazon of all places! anyway I put it all together ran them through an equalizer to clean up the sound as best i could then made a CD and ripped it back onto the computer so this file is all at 320 kbps. All the tracks are tagged "Untitled" (cos they are) but I've put in brackets after each track what release it comes from etc some of the tracks aren't sparkling quality but that's the joy of vinyl i guess? But this collection is a million miles from unlistenable i assure you! Not being too conceited here but from my what my research tells me this is the the only place  you'll get a full and decent quality discography of this great band anywhere on the net trust me I tried before putting all the work in to make one myself and I want to keep great music like this around for other people to discover with ease as it seems a real shame to me that a band with great songs and an original style that lasted such a short time but left such a brilliant set of music should be consigned to the dusty basement of music history. If someone from the Kabinboy reads this post if you have the masters of all this stuff you should put together a discography of decent quality and put it on bandcamp or something I am sure I can't be the only person who would want to see this great music released in decent quality! But in the meantime here's my version ENJOY....