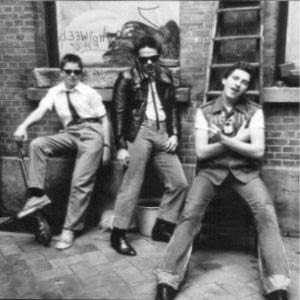 So... I happened upon The Kids by pure chance a friend of mine on facebook posted a youtube video of one of their songs and i was curious about this Belgian punk band and i looked them up and lo and behold they were utterly brilliant!!!

As I've literally just got onto this band a few weeks ago I can't claim to have much knowledge about them at least no more than anyone else could find with a quick google search! What I can tell you is they were formed in Belgium in 1976 by Ludo Mariman and 2 brothers named De Haes the younger of which Danny on bass was only 12 when the band formed and was not even allowed into some venues to play their gigs because of this!! They released 2 albums in 1978 their debut "The Kids" and a second "Naughty Kids" They had a career beyond that had quite a few albums and singles but I have yet to investigate those and thought I'd stick to what was released during the original period of the punk explosion.

What i can tell you is these guys play some of the best frenetic fast paced garage punk I have ever heard this is every bit as good as anything released by their British peers there's no denying this is definitely punk but there are far more nods to stuff like the Stooges or The Ramones or the Buzzcocks than the more yobbish stuff however "Facist Cop" does smack of ripping it's chorus off from "E.M.I." by the Sex Pistols!!! anyway don't let the use of the word "Punk" put you off this is some great catchy and memorable stuff these guys should have been huge this is more like a high speed MC5 or something there's definitely a huge blues/rock 'n' roll influence on their music except obviously played a helluva lot faster!!!

So it took me a while to source decent downloads of their albums but i managed to snag debut "The Kids" at 320kbps but 2nd album "Naughty Kids" is only at 160kbps but is really good quality and WAY better than the vinyl rip I had before. "Naughty Kids" has a bonus track from their "No Monarchy" 7" and as a further bonus you get the "Never Mind the Pistols Here's The Kids" EP with 5 live tracks from 1978 and a bonus previously unreleased studio cut "No Work"  and that pretty much rounds up their 70's work as I say i have yet to venture beyond that however i am considering buying the 6 CD Kids "Anthology" so you can sure bet if I do I will update and expand this post! Yeah they ARE that good!

All I can say is if you like the sound of this just give em a try I normally avoid anything tagged "punk" however these guys are just utterly great and have been getting heavy rotation round here plus I feel the "garage" tag suits them much better they have more in common with bands like Radio Birdman than the Pistols or something!! It's free so if you check em out what have you lost? 2 mins to download an album 1 min to listen and decide if you like it or not? 3 mins ?? not a lot to ask when they could be your new favorite band and if you're here reading this you sure as shit know they wouldn't be here if they weren't good!!

So here you go some high energy rock'n'roll/garage/punk, think what you will but it shocks me that something this great was happening in Belgium in the 70's and I'm only hearing about it now!! GO GO GO!!!!