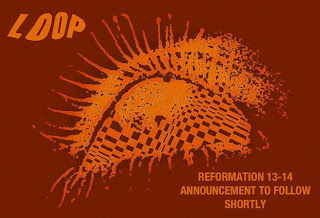 *NOTE* once again I have updated and expanded a post for you awesome readers so if you have been to this post before scroll down to where it says "UPDATE JULY 2015" if you haven't been before as usual please... read on...


Some of the more discerning readers of this Blog will be aware of this Band but some of you younger pups may not. Loop were active originally in the mid 80's early 90's and play a style of Psychedelic/Garage rock that pre-dates the stuff that's coming out now by about 25 years!!! I guess you could say they were well ahead of their time but back when they first came along they were a truly original band. I was recently alerted to the fact that Loop are reforming and playing some gigs at the end of the year/beginning of next year so I decided that a Loop retrospective was highly appropriate.

So How to describe Loop??? shit! fuck knows if I can! Best way i can describe it to you is if The Stooges had hooked up with Suicide in the early 70's and decided to do a Velvet Underground influenced project band it may well have sounded like Loop! Now those 3 bands mentioned are certainly heavy names to live up to and whilst not sounding exactly like any of them I can tell you for sure whilst there's elements of all 3 in their sound this is more the feel of the music rather than just pure copyist tactics. So that's all I'm gonna say as far as describing their sound goes do some research look em up on that google thingy and you'll be sure to find plenty of info! However you may be interested to know if you didn't already Robert Hampson of Loop was 2nd Guitarist in Godflesh for a number of years in the 90's and has his own band the more experimental Main.

Right back in 2008 Loop had all 3 of their albums re-mastered, re-issued and expanded to double CD's and they are great packages however at around £13 - £16 pounds each I decided having bought them all once on vinyl i was entitled to a download! They weren't that hard to find but I couldn't get them all in one place and it took me a while to download them all as well so i decided due to so much "Link - Killing" going on I'd hook you them up all in one place so here's what you get.....

"Heavens End" 1st album from 1987 and probably my favourite The Stooges/Suicide/Velvets influence is definitely felt here especially on album opener "Soundhead" plus there's 2 appearances for their cover of Suicides "Rocket USA" so that's pretty much an In-Your-Face what the influences are anyway as i said I'm not gonna blab about their sound heres the details, Disc 1 contains the full album remastered Disc 2 contains 3 alternative versions of album tracks and the 3 tracks from 1st John Peel session from 1987, not much bonus material on this one but well worth the having what there is.

"Fade Out" 2nd album from 1988 The sound is still in the same vein however it is a little less "Heavy" than it's predecessor and more akin to the sound they are best known for. Disc 1 contains the album remastered Disc 2 contains 4 demos & alternate versions of album tracks and their 2nd Peel session from 1988 and is rounded out with 5 "Guitar Loops" that were used on the album.

"A Gilded Eternity" 3rd album  from 1990 by this time Loop had been building quite a buzz and their sort of crazy psychedelic sound was becoming more and more popular and this album was their most successful and  is the most revered of the 3 released does it live up to the hype? Hell yeah! They really nailed their sound on this one it's less swirly and psychedelic than the first 2 albums and is a much more aggressive album without going for the "Heavier louder faster" thing, it's a really driving album and the songwriting shows they have really progressed and matured as a band and with utter classic tracks like the stunning "Afterglow" the buzz around them at the time was well deserved. The edition here contains the album remastered on Disc 1, Disc 2 contains 2 alternative versions of album tracks their 3rd and final Peel session from 1990 and a batch of 5 demo tracks recorded at "The House In The Woods" which was their home studio.

So in my original post I mentioned that I had posted the original 10 track version of the EP's & Extras comp "The World In Your Eyes" as i had a copy of the massively expanded 3 x CD version but it was in my malfunctioned external hard drive I feel i should never have mentioned this because in the original posts comments i was certainly bombarded by readers asking "have you had your hard drive fixed yet?" and "When will you be posting the 3CD version" and as Loop is one of the most downloaded bands on this blog (the albums have been downloaded from 900 - 1500 times) and because it was pissing me off personally as i didn't even have it to listen to myself i tried downloading the tracks and EP's that make up this compilation separately it was a partial success i manged to get all of the EP's etc downloaded but the quality was pretty poor so i bit the damn bullet and I've gone and bought it for my own pleasure and because i felt i owed it to the readers of this blog who have continually commented and kept coming back to the blog so £13 ($21) later and here you have it the full 3 CD expanded remastered "World In Your Eyes" ripped direct from CD at 320KBPS as per usual UTS style! It's a fantastic comp containing the "16 Dreams" , "Spinning" , "Collision" , "Black Sun" and "Arc Lite" EP's as well as some comp tracks a few live tracks some unreleased bits and their cover of "Like Rats" from their Clawfist records split 7" with Godflesh and as stated all remastered So there you go readers you can now stop asking when my hard drive is gonna be fixed hahahahaha

However... it does not end there as some of you may be aware Loop reformed in 2013/14 to play some gigs and most famously an appearance at Roadburn Festival however there was no mention of recording so imagine my surprise when i found that they had released a new 4 track EP called "Array 1" I wondered what if anything Loop could pull out of the bag some 25 years since their last recorded output, would it be any good? The answer is yes it is absolutely great the first 2 tracks are Loop business as usual swirling guitars ethereal vocals and really it is just like the last 25 years never happened and that loop had been sealed in ice since the early 90's only to be thawed out in 2015 and now there's a new Loop record out!! However the next 2 tracks to me sound like Robert Hampson is trying to sneak some serious influence from his project Main in there. "Coma" is a pleasant enough 7 minute drone nothing exciting just ok not offensive or anything however the 17 minute "Radial" is a combination of Main style drone building to a great Loop style rock out!! All in all I am pretty impressed with this EP and I am hoping that being titled "Array 1" that there may well be more to come!

So below you will find this post is now finally complete with links to all 3 remastered and expanded Loop albums plus the 3CD "The World In Your Eyes" plus the brand new EP "Array 1" Hope that makes some of you mad for Loop people happy as it does me!

OK so there ya go if you don't know this band go check them out if you like the sound of my description, if you're already a fan but haven't got the remastered & expanded editions of the albums here you go...

The World In Your Eyes (3 Disc) - Mediafire