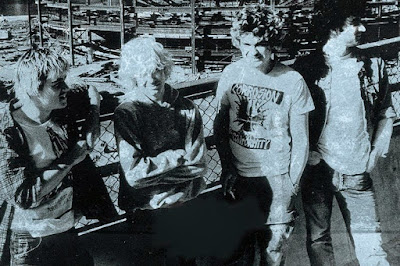 Ok so Massappeal were a band that came from Australia and whilst Aus has a great rich history of hardcore with bands like Depression, GASH,Civil Dissident and Death Sentence I always felt like they were kinda overlooked and only the most devoted of fans followed Aus HC for some reason it doesn't get the same slavish devotion as hardcore from far away lands like say Japanese Hardcore does despite the quality of the bands coming out of there over they decades. Massappeal are one of the bands that were criminally overlooked. Whilst they released 4 albums and a few EP's I'm only going to cover their early years here simply because whilst they did release music from 1986 to 1994 it's their 1st mini album and 7" that really hold a special place in my heart as after that they matured and went in a more melodic direction so i shall begin...

Massappeal burst out the gate with a raging 7 Track mini album "Nobody Likes A Thinker" in 1986 followed shortly thereafter by a single "The Bar Of Life" in 1987 I was lucky enough to hear these at the time through tape trading and eventually a friend bought them and we played those records to death at that time it was a case of the faster the better and Massappeal definitely fit the bill!

Fast forward a couple of decades and I managed to download some vinyl rips of those essential early records they weren't great quality so i barely listened to them and sent them to the hardcore folder for nostalgia purposes fast forward a few more years and I'm at band practice earlier this year and during a break our singer as he often does plugs his iPod into a speaker so we can listen to tunes and he says you must remember this? and i said is that Massappeal? and lo and behold it was! So we were having a discussion about how great they were and i said has this never been re-issued on CD to which our singer said it definitely had not. I was skeptical surely classic hardcore like this was NOT just languishing in the dust of HC history with only out of print records and shit quality MP3's as their legacy?So I went home that night went on the internet and discovered that not only had it been re-issued on CD in 2007 by Relapse they had also added the 7" a comp track and the entire first demo!!! I of course hit buy immediately and that brings us to this post!!

So how to describe Massappeal well take the speed of early Bad Brains (Rock For Light era) and D.R.I. (Dealing With It era) a ripping guitar sound and some great vocals with that kind of snotty punk belligerence that only the Australian's and Jerry A from Poison Idea can deliver! This is basically fast thrashing hardcore 80's style and if these guys had been from the USA they would be worshiped with the same reverence as bands from that period that they were easily the equal of like DRI, Excel, (early) Suicidal Tendencies, Verbal Abuse etc. What I think separates Massappeal from the pack is the awesome production sound of these early records the drums sound HUGE even when they are blazing at 1000mph the guitar is just gnarly and brilliant and loud and everything is mixed to perfection they sounded great on record on CD it's even more so!When i first got this CD I couldn't stop playing it for a week it was the same thrill i got from hearing it at 16 years old and it still slammed my Jaw to the floor and with track titles like "Rat In A Hole" and "Pissed On Life" you know exactly what you're getting this is raging stuff with a sense of humor a skateboard and a beer in hand and they came to rip your faces off!!!

So the CD reissue as I've said sounds great however the addition of their demo is a major bonus as I had never heard it whilst 7 of it's 9 songs later appear in much better sound and fury on the mini album and 7" it's a great glimpse into the early days of the band and it's  decent quality for a demo the CD contained an extract of a live set but i omitted that here due to repetition of the same tracks and didn't really think it was worth having and detracted from the greatness of the studio recordings.

So here you have it a retrospective of this amazing Australian hardcore thrash bands mid 80's (and best) music, if you are a fan of any of the bands or releases that I have mentioned in this write up and have not heard this it is definitely ESSENTIAL to your collection and you have missed out on some great stuff so you can remedy that now... click below and GOOOO MOSHHHH!!!!

Nobody Likes A Thinker - Mediafire
Posted by Dave Ballantyne at Wednesday, September 16, 2015