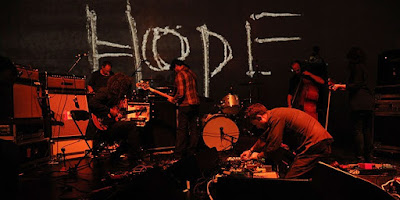 SCROLL TO THE BOTTOM FOR UPDATE


I have wanted to do a post on this band since i started the blog but as i was so concerned with rarities and putting things on here that were hard to find i never did get round to it but under my new blog rules of "Anything Goes!!" here we have it...Godspeed You Black Emperor are an anything up to 12 piece instrumental band revolving round a core of about 5 musicians utilizing guitars, drums, bass, percussion, violin, cello and many more instruments, found sounds and field recordings to create a sound that is stunningly beautiful, sometimes bleak and occasionally terrifying! I have been a fan since their first vinyl album back in 1997.

When I lived in Manchester I was lucky enough to have a local record shop in Withington called Pop Art run by a very friendly Cypriot fella called Nick whose knowledge of the most obscure fringes of music was unsurpassed. He stocked everything from the most obscure dub reggae re-issues to imported Japanese noise CD's with no English text on them whatsoever (A typical Pop Art Conversation with Nick would go like this,"Nick - whats this?" , "I dunno it's in Japanese but it's dead good!" ) and the vibe of the shop was such that anything you wanted to hear was no trouble at all and i used to spend hours in there checking stuff out, shooting the breeze and having endless cups of tea with Nick and listening to lots of crazy music! Anyway.. I had heard a lot of talk about this amazing new band from Canada and i was desperate to hear them but had no way of finding their album as it was very poorly distributed and it's original pressing was a really small number like 1000 copies maybe? but one day browsing the racks in Pop Art I came across the album pictured below it's hand made sleeve with a bleak black and white photo of a water tower along with the burgundy card used for the sleeve the hand embossed logo and no information or clues to it's contents had me intrigued i couldn't read the embossed text so i took it out of the plastic and read "Godspeed You..." (unsurprisingly Nick had just ordered it on a whim) with an excited gasp I handed over my money and practically ran home! 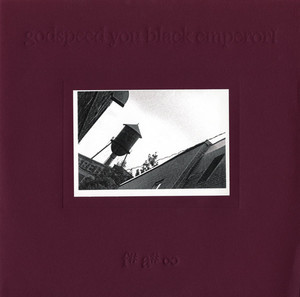 When i got home and excitedly placed the needle on the record and I have to say on first listen i was a bit disappointed with this album I had heard comparisons to Mogwai and other "post rock" type bands I was into and this was nothing like anything of that genre i had heard what disappointed me was the lack of drums/percussion throughout most of the album, but after repeated listens I began to like it a little more but was still not really convinced, but the story of this album does not end there.. a few months later Kranky records from Chicago one of my favorite labels at the time picked up the album for a beter distributed CD issue the original vinyl version had been taken back to the studio remastered and remixed some parts removed and a whole heap of new music added (To illustrate the difference the vinyl version clocks in at 39 minutes the CD version at 59 minutes) although the majority of the original vinyl version had been retained it had been put together with the new parts in such a way that it gave the album a completely new sound and feel it was at this point i "got it" the CD version of the album just floored me I played it to death for ages and still listen to it repeatedly to this day! (I have uploaded both the vinyl and CD versions so you can draw your own comparisons)

I don't wish to be a cop-out here but in the case of this band this really is music that is like a soundtrack for a lost movie the scope of the songs have a feel of wide open spaces and deserted highways like a road trip through some vast expanses of land such as you'd find in rural America or outback Australia. The Ennio Morricone style guitar work and achingly gorgeous strings entwined with the sparse percussion and various other instruments used to build the songs to bombastic conclusions over the longer pieces, linked together with the use of eerie effects, bowed guitars and general instrumental experimentation to create a sound that just envelops and capitvates you completely whilst it would seem the kind of music you would put on in the background the sheer heart breaking beauty of this music commands your full attention.

I honestly feel that the descriptions above really do cover anything else that i could say that would do this band justice I've been sat here listening to them whilst I type this and I feel that my opinion would be biased because I have a deep love of their music their independent ethos the fact they are a self contained unit and record and release their music themselves and design and (in the early days) HAND MAKE (!) their own releases and operate almost completely outside the music biz but have still managed to gain massive popularity and influence endear them to me a lot and also it's utterly impossible with my limited vocabulary to do the music justice in words. So here's some info you may need to know when downloading and some interesting facts...

The CD of the 1st album "F#A#∞" (Which is musical notation for Fades Into Infinity) contains a hidden track "J.L.H. Outro" which fades in some 20 minutes after the end of the 3rd piece but in my file here i have separated it from the last piece and added it as a separate track as I owned the CD for 6 months before i found out it was even on there (I read a magazine review of a live show and it said the opened with the hidden track from the first album and i thought "HEY! what hidden track?")

The vinyl version of the first album that i have presented here fades into a locked groove on the vinyl at the end of side 2 that repeats until you lift the needle so when i recorded it i let that run for a bit and then faded it out.

1999 EP "Slow Riot For New Zero Kanada" has 2 tracks but clocks in at near 30 minutes parts of both tracks have been used in various TV Programs and documentaries but most famously was used (along with parts of the first album) in apocalyptic "zombie" film "28 Days Later" and in my opinion is some of their finest work.

3rd album "Yanqui U.X.O." was a double album released in 2002 produced by Steve Albini and was the last thing they would release the band being on indefinite hiatus until 2012.

During the hiatus and whilst Godspeed were still going members were involved in various other projects their drummer did an album under the name of 1-Speed Bike where he cuts up and loops his own beats and creates some truly interesting music, various members were also involved in Exhaust a sorta Post Rock Drum'N'Bass type band, Guitarist Efrim Manuel Menuck has done a solo album which is really good but most well known of the projects is Silver Mt. Zion (and the many variations on that name) who have done a staggering 6 albums and 2 EP's if you like the music here i suggest you seek them out! However Godspeed returned in 2012 with a brand new album " Allelujah Don't bend Ascend!" Which after the success and long standing career of Silver Mt. Zion was such an unexpected and welcome return and an album that shows in their 9 year absence that no momentum has been lost and "Allelujah..." Is some of their finest work!

So onto the files I have uploaded the 4 albums and their EP  for you plus their John Peel Session and a split 7" with Fly Pan Am they did for Amazine magazine. what you need to know about these guys is on the first album and second albums that they do not split their music up into individual tracks, on the first album there are 3 movements consisting of individual pieces that all meld together within each movement into a cohesive whole, each movement has a title then several subtitles which is a bit confusing, on second album "Lift Your Skinny Fists..." which is a double vinyl and double CD there are 4 movements. on the 3rd and 4th albums and on the EP there are individual tracks. the John Peel Session is one long track exclusive to that session and on the split 7" obviously there is only one short track. I prefer to just disregard the track list altogether and just listen to the music however should you wish to check it out you'll get the full breakdown for 1st album "F#A#~" HERE and for 2nd album  "Lift Your Skinny Fists Like Antennas To Heaven" HERE I have put the track from the split 7" in the file with the John Peel Session to save on too many links as it's only a 5 min song. All the Albums and EP are ripped from my own CD's at 320kbps the Peel session and split 7" are from net downloads.

So here you have the near complete discography of one of the most unique, wonderful and utterly enthralling bands to ever grace this planet the influence of Godspeed You Black Emperor cannot be understated their unique style has influenced a whole generation of bands and completely changed the face of post rock music and underground music in general  since they appeared Think I'm overstating? check out bands such as Explosions In The Sky & Canyons Of Static The latter took their name from one of the pieces on Godspeed's "Lift Your Skinny Fists..." album! Also since Godspeed came along SO many bands have started introducing strings fashioned in the Godspeed style in all forms of underground music from crust to rock!

I can't say enough good things about this band if you have not heard them get going and d/l immediately because if this music does not move you you might as well give up your hearing or go watch x factor they are just beyond amazing! ENJOY...

*UPDATE* Just responded to a comment on this post and realised I had Godspeed latest album uploaded to be added to this post so to save me having to write a big blurb about it I decided to just throw the link in here for you guys so that everything is on here so here you go folks Godspeed's 2015 album "Asunder,Sweet And Other Distress" It's a new GYBE! album you don't need me to tell you what it's like obviously it's GREAT! enjoy....