Virulence well first off let's get the obvious stuff out of the way they were a hardcore band who's members went on to form such stoner rock titans as Fu Manchu and Nebula! So Virulence released 2 demos and 1 album the demos were widely circulated on the tape trading circuit but they released their debut album on Alchemy records who were a short lived but phenomal label releasing debut albums by Neurosis and Melvins along with Poison idea's 2nd album as well as this Virulence album. The debut vinyl version only had 8 tracks but the Southern Lord label picked up a couple of the Alchemy records back catalog recently this being one of them which they expanded from 8 tracks to 16 adding the 2 demo's from 1986 and 1988 and adding a bonus demo track from 1985 so seeing as how i have a great quality version from CD and not vinyl it was well in need of sharing and fitted with my other posts beautifully!!

This is a great album both with and without the demo's! This band takes a similar path to labelmates at the time  Neurosis & Melvins Slow to mid paced powerul fucking music and throwing some jammed slower Black Flag style parts in there as well, believe me this is no nod out stuff here some of it may be slow but when it's slow it has that same menace that you feel from any hardcore record at the time that dark nastier side to California! except slow and painful rather than quick and painless! Don't get me wrong there's enough pacey material on this album for the hardcore fans but it's slower twisted stuff that really makes this band unique going back to Black Flag again think of how amazing "Scream" and "Nothing Left Inside" were first time you heard them? well the slower tunes on here have a similar feel to that except with a sharper attack and a little less clumsy bludgeon!!! I can't explain the great and unique sound of this album any better if my blurb hasn't got you interested then do your own research!!! here's your link Virulence : "If This Isn't a Dream 1985 -1989" Expanded and remastered reissue.....

I have since bought the CD so it is now re-upped Ripped from my own CD at 320kbps  also I have ordered it like this....

Which leads me to my next related release shortly after Virulence split up members went on to form Fu Manchu now they did a comp of their early singles called "Return To Earth 1991 - 1993" however it may interest you to know that it omits their debut EP simply entitled "Fu Manchu" released in 1990 on home of much extreme hardcore and other forms of music Slap A Ham records this EP seems to have never been re-issued or compiled on a comp or anything and i believe it's quite a rarity! however I found a copy on the internet and uploaded it for you! Check out the actual roots of Fu Manchu this is a million miles away from the tuneful sun baked stoner vibes they would ultimaltely become famous for! This kinda carries on where Virulence left off the hardcore vibe is a lot less here and is more like something like early Melvins or the first Sleep album with it's stop start vibes and Black Flag - isms! This is a killer EP and i'm gutted there's only 3 tracks I wish they'd done an album in this style cos they were onto something way more fucking killer here than what they have made their name from! No diss to Fu manchu great band as they are but this EP is just something else! Go see for yourself...

So....Seems Fu Manchu decided this EP was worth reissuing after all and it seems it's a case of careful what you wish for cos I recently discovered that in 2015 This was re-ssued on a 10" with a Bonus song from the same session "Blowtorch" (On At The Dojo Records if you want the vinyl?) & the bandcamp download had a further extra track "Flashin'" from a recording session later in 1990 so not quite the full album I wished for but a 2 track expansion will do! It has been remastered as well for better quality so I have replaced the old vinyl rip link with the new 5 track remastered version for best quality... Enjoy!!! 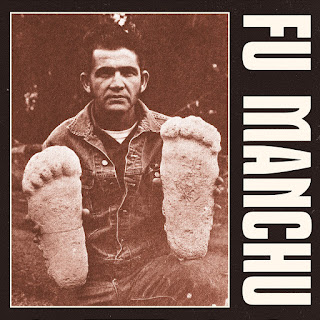