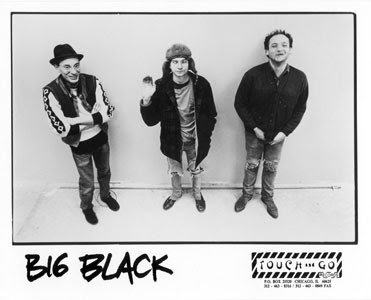 Do Big Black really need any introduction or explanation? I don't think this post would be of interest to anyone who might come across it randomly and fancy checking out this band with no prior knowledge?!

Big Black, at the time were a band making some harsh noisy stuff, they always get pegged with the industrial tag but I feel that's unfair, maybe it was their use of "Roland" the drum machine that put them in that category in a lot of peoples mind? I certainly don't think they are Industrial in any way! I think they are definitely the progenitors of what would later be called Noise Rock and popularised by labels like Amphetamine Reptile.

Right so whats the point of this post you might be thinking? Well, I recently discovered that, although they have not been reissued on CD between 2013 & 2018 Big Blacks primary releases were all remastered by Touch and Go and reissued on vinyl with a download version also available, so myself being a sucker for a remaster and always thinking that those recordings REALLY needed an update for the modern stereo I managed to get my hands on them all! Now this is NOT a discography as for some reason it would appear "Lungs" EP and the "PigPile"Live album were not deemed worth remastering for reissue plus there's things like the Peel session and "Sound Of Impact" Live album etc. So what you get below is both studio albums and 3 of their EP's all remastered and trust me the difference is noticeable! The Guitars sound sharp the bass thunders and that drum machine POUNDS! So for those of you like me that may not own a record player or simply don't want to re-buy albums you have lived with for decades then here you go the absolute cream of Big Black remastered.