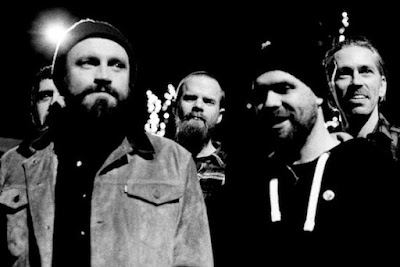 PIGS PIGS PIGS PIGS PIGS PIGS PIGS (who shall be referred to as Pigs x 7 for the rest of this blurb) are a 5 piece band hailing from Newcastle Upon Tyne, I have heard them being described as psychedelic, motorik beats, Noise, Heavy Rock etc etc for my money they are a lot like Henge (see post HERE) one of those bands operating withing the "Heavy Riffs" spectrum of music but without falling into the derivative trap of pilfering Sabbath riffs and crooning vocals from the Kyuss school of rock!

I came across these guys when they did a split 12" with The Cosmic Dead back in 2013 I was really impressed by their 21 minute epic "The Wizard and the Seven Swines" But the name was ridiculous and I thought maybe they would be one of these bands with weird names that disappear into obscurity as it was a further 4 years before anything was heard of them again. I have no idea what was going on in the interim, touring, writitng? Who knows but since 2017 they have managed an album a year so maybe they were "woodshedding" enough material for the 3 albums? I don't know a great deal about this band I have not followed them avidly I love their music but really there's not a lot of net presence I did some searches for this article and could only find an interview preceding their debut album in 2017 (HERE)  SO I can't tell you much about them and that's after following the band through their 3 albums since 2016! So instead let's talk about what's on offer here

First up we have the Split 12" with The Cosmic Dead! This only contains 1 track by each band (I have only given you the Pigs x 7 side here as a post on The Cosmic Dead maybe done in the future) But at a hefty 21 mins Pigs x 7 have packed a near albums worth of material into one track .one of the main motif riffs is so catchy it automatically has my head bobbing like a demented chicken with a huge smile on my face! This track is pure riff heaven keeping the pace mostly at a foot tapping tempo throughout, the drummer provides a great beat and the backbone for this epic, whilst the guitarists stick with a motif that is pure 70's rock meet's Can or NEU! but this is no repetitive cycle while the main riff is ever present the interplay between the 2 guitarists ensures that the song dips and peaks in all the right places but also rocks out enough to keep you interested throughout not only that but there's plenty of parts where they just soar the song into the psychedelic stratosphere but also descending deep into BIG heavy riff territory too that just makes you go UGH where did that come from? Leaving you thoroughly satisfied that this is one hellavu Band!

In the interim between The split 12" and debut album Pigsx7 released a very limited  (50 Copies) cassette featuring the full length 21 minute version of "Psychopomp" (A truncated 16 minute version would appear on debut album "Feed The Rats") I have not long found this out as I say info is lacking on these guys, but upon listening to the 21 minute version of "Psychopomp" I didn't notice a great deal of difference between the 2 versions, except the cassette version is longer! The flipside of the cassette contains a remix by Joseph Curven who like Pigsx7 I can find little info on it's a 16 minute almost ambient take on the song and is kinda interesting but didn't really move me that much.

Onto the albums, When I bought debut album "Feed The Rats" and put it into media player it says EP I suppose at 3 songs but clocking in at 36 minutes it's a grey area. Opening with the aforementioned shorter (though at 16 minutes not short) version of "Psychopomp" this is a great tune with a bombastic heavy riff and some neat guitar harmonics that pierce the main riff to great effect. What I have noticed about these guys is as they progress the music has become more riff based and less of the psychedelic/kraut touches, which is no bad thing as they are head and shoulders above their contemporaries in this style and make music that is far more compelling than your average doom/stoner type stuff. Their riffs, whilst good and heavy don't follow your typical riff patterns and whilst lessened, that psychedelic edge is still there. You can definitely feel this in second track "Sweet Relief" and again in closing 17 minute epic "Icon"

I could go in depth on these guys next 2 albums as well but I fear I would be repeating myself. Pigsx7 are a great riff based band their albums have got better and better as they go on, the band have progressed throughout in both songcraft and sound, opting for less extended pieces to more regular lengths of songs and more conventional grooves, they always seem to have this ability to write a tune that immediately gets your head nodding, this is a formula taken to perfection on both 2018's "King Of Cowards" and current album "Viscerals" also they seem to make their sound "bigger" with each successive album where the sounds just really leap out of the speakers with a nice rich fullness but never sacrificing the dirty, grimy sound of those great guitars!

Below I present their entire discography to date I have packaged the Split 12" with the Cosmic Dead inside the file for debut album "Feed The Rats" below and as an addition after I started this post I found out that the LP version of their "Viscerals" album came with a mail order exclusive 6 Track "Live" CD "Off-Cuts". This is not strictly speaking a live CD, it's a selection of tracks from their albums played live in the studio and contains a run through 1 track from "Feed The Rats" 2 from "Viscerals" and 3 from "King Of Cowards".To be honest though as there's no crowd, no mistakes or feedback or chance occurrences and also as they are pretty consistent in their sound there's not a great deal of difference to these ears between the versions on "Off-Cuts" and the album versions but as it's a hard to find thing I decided I'd put it here so the discography is complete!

So there you go one of the UK's best and most interesting riff monsters collected! An absolutely stellar band with a ridiculous name and some amazing songs! You should be downloading these already! 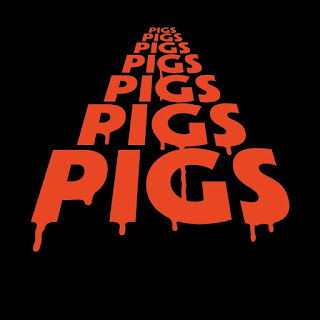