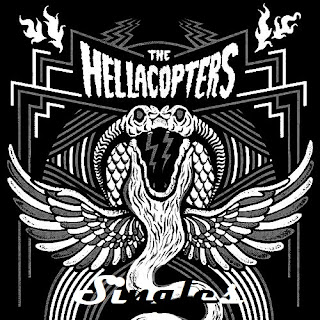 I hadn't listened to the Hellacopters in ages and decided it was long overdue and I pulled out the files for the singles I uploaded to this very blog, upon listening I discovered that they were fairly average to poor quality and for the most part appeared to be vinyl rips so I decided to have a look and see if the entire lot could be pulled from the hundreds of variations of CD releases the Hellacopters Have out and lo and behold IT WAS POSSIBLE!

Now I am not gonna go into any blurb here about Hellacopters as you can go to my original post HERE  and read all about the singles etc and I intend on leaving that post up because if you are anything like me you probably are ecstatic about finding all those great 7" singles in handy packs with the covers etc. But I decided to make this a sort of companion piece to that post.

I am becoming less obsessive about having separate singles and EP's by bands these days, if a band has many EP's I am finding that I generally compile them chronologically into packs for myself rather than spend ages scrolling through a bands discography when, as is the case with the Hellacopters they have 33 Singles!  I also noticed when putting this new version together that a LOT of stuff on the singles I originally uploaded were repeats of album tracks (a lot of the singles had an album track as their A side) so I removed any tracks that appear on albums. SO here's what you get.... I painstakingly surfed round every compilation, special edition etc etc and I have managed to pull together all but 3 non album tracks by these guys. I have arranged them in chronological order A & B-sides together into 3 "volumes" all of these are taken from CD at 320KBPS quality anything that was not available on CD was omitted (that amounted to 3 tracks only If you are beyond obsessed with this topic then the missing tracks are available at the original post as low quality vinyl rips).Also in my original post I only covered till 2005 this new version covers from the debut 7" in 1995 to the last one in 2008 and also includes the 6 track "Strikes Like Lightning" EP that is not in the other post.

So here you have it one file, 3 volumes 71 tracks and a far superior in quality and far less haphazard collection of the complete Non Album Hellacopters tracks complete with custom cover by me (see pic above)

However as this post is a redux I figured I'd give you a bonus so as well as the new higher quality singles compilations I have added a little bonus Hellacopters "Maida Vale" this folder contains their one and only John Peel Session from 1999 as well as a full Live set from Maida Vale Studios for the John Peel show in 2003! they aren't astounding quality but not unlistenable either.

Apologies for the short post I made this "Digital" MP3 version of the Hellacopters Singles for myself but as I remember it was a hugely popular post that's why I am leaving the original up but I figured the chance to have these in far superior quality was one you guys should have! ENJOY!