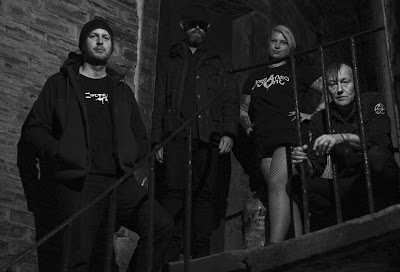 I have taken a huge step back from participating in the punk/HC underground in recent years but one band for whom my passion has never wavered is these guys. Burning Flag have pretty much ruled the UK HC scene for me for the last few years after 2 incredible albums they parted (amicably) with their brilliant singer MD and, for me when you have your  sound nailed and fantastic chemistry this could have been a blow most band couldn't recover from.
This is not the case here Burning Flag are back with a new singer Holly and a new album "Matador" and it's absolutely fuckin blistering!

Opening with an innocuous quiet little piece of music the album bursts out of the gate with what is possibly their fastest song to date "Thrown Out" with a ferocity that I haven't felt since dropping the needle on Discharge's "Hear Nothing, See Nothing, Say Nothing" for the first time, it has that same blast-you-into-the-wall  effect! The production is outstanding, the guitars are a solid wall of intensity, the bass bubbles through the mix providing a real solid and gnarly bottom end, the drums crack like lightning and Holly is right in the pocket trading off vocals with Jonesy. Top marks go to Holly it can't have been easy to follow a great vocalist like MD fronting a band as well liked as BF but whilst not a million miles from MD's style she brings a sorta punk belligerence to things which is totally her own and fits the new songs perfectly!
It almost feels like Burning Flag have something to prove here coming off the back of  losing their singer, a global pandemic and a year that hasn't been easy for anybody let alone bands. This album burns with an intensity that to me shows they have channeled all this into a sound that even in it's less full on thrashier moments like the intense title track "Matador" still exude menace and sheer force!
What I lover about Burning Flag is, it's their wide range of influences gives them their unique sound I hear elements of Guitar Noise, Industrial, Metal, Punk & Hardcore in their sound but they blend this in such a way that you can't mistake this band for anyone else! There's huge riffs aplenty and they are of the kind that makes you want to repeatedly smash your head into the wall with glee! There are no highlights to this album simply because to have highlights there has to be songs that are weaker than the rest and there aren't any! Every song is absolute as good as the one preceding it and the one after but for the sake of the review a few things did stand out like Single "Eat The Rich" a classic Burning Flag riff with it's stop start chuggery it's gonna down a storm when they get back out playing live! And the destroying, discordant VoiVod-esque riffing in "Vendetta"  tempered with a SWANS like pounding mid section really blew me away! Good ideas are plentiful here amongst the business as usual Burning Flag Arse Kicking and I found that the whole album kept my attention and engaged me completely! The real surprise here for me was closing track "All The While" clocking in at near double the length of the rest of the album tracks this is one unholy bastardization of Killing Joke at their heaviest Rollins Band at their nastiest before breaking into an extended heavy chuigging riff that would probably make Slayer cry!
Summing up Burning Flag have returned with an album building on the strength of 2 great albums to produce an even greater one! Every member of this band is playing like their lives depended on it and it shows! This album does not let up from start to finish whilst there's plenty of variety on offer it's an album so intense in it's delivery you're gonna feel exhausted just sitting listening to it! I honestly don't know where they get their energy from! I stand by what I've been saying for about 7 or more years, these guys are about the best in the scene right now and this album has just stamped all 8 of it's booted feet  down on this fact with unwavering authority!
Matador is out on Thursday (14/4/21)
Download or Buy CD here - Bandcamp 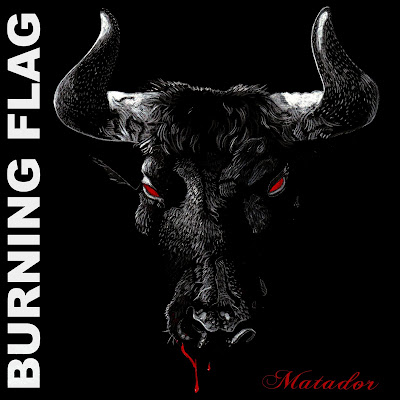