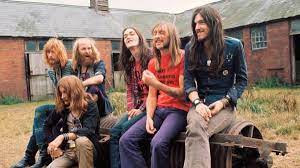 (Hawkwind At Rockfield Studios Monmouth Wales early 70's)
I threatened to do this years ago in another post where I defended Hawkwind as one of the most underappreciated bands of psychedelic music. I also think that the whole hippy/space rock/traveler associations related to Hawkwind though endorsed by the band themselves has rendered them a kinda "niche" band though popular enough to subsist on their touring and album sales never quite reaching the heights of popularity to become a true household name, which in my opinion is what they deserve. Having constantly reinvented themselves in new and interesting ways yet never having strayed too far from their core sound Hawkwind for me have remained consistently fantastic for  over 50 years and are one of the most unique and inventive bands in the history of rock music.

I have been a fan for near 30 of those 50 years. So how did I get into them?  Here's my story, Whilst in my teen years, despite someone in my circle of friends always having a Hawkwind album and having heard "Silver Machine" and "Hassan-I-Sabbah" a million times particularly the latter simply because my pothead friends used to like to play it because of it's refrain of "hashish hashish hashish" I never really took to them lumping them in with the rest of the old man hippy shit! Around 1991/92 my interest in extreme music such as death metal etc began to wane, I also kinda fell in with a new group of friends, who, despite liking great music were not a part of that "extreme" scene. I began to get my mind opened to all sorts of new music and that was the real beginning of the opening of the musical floodgates that got me to where I am today! Enter my old pal "J" he was a few years older than the rest of us and was a kinda hippy!, He not only introduced me to  Hawkwind, Ozric Tentacles, Gong,Steve Hillage etc he also gave me an education on cannabis and hallucinogenics! Previously I had just wanted to get wrecked on weed n booze. "J"  taught me to use these things more like a sacrament to expand my mind and this tied in with the sounds of space rock changed me forever! Hawkwind have been a firm favourite ever since and they long outlasted my youthful dabblings in drugs!!

So I am not even going to attempt a Hawkwind discography having released a staggering 92 albums (Live and studio) and a further minefield of 102 compilations and that is just under the Hawkwind name alone, when you start looking at side bands, pseudonyms etc it just makes you dizzy I own 24 CD's by them and my digital collection amounts to a staggering 11 GB and I can honestly say I'm only scratching the surface! Couple that with the fact that they have re-recorded old material multiple times it's just insane and makes my head hurt! I think even a true dedicated lifetime HAWFAN would struggle to provide you with a full discography! So what can I give my discerning blog readers that would fit the bill and satisfy me that I was giving you a top quality overview of one of my favourite bands???

Back in 2010 Hawkwind hooked up with notorious underground label Cherry Red which I think is still their home to date and started a sub-label called Atomhenge this was to be the ultimate in Hawkwind reissuing, remastering, repackaging and expanding a huge chunk of their classic back catlog covering the years 1975 - 1997. For the Hawkwind fan this was an absolute mind blower. Not only were the albums remastered and sounded great, in most cases they were expanded massively with outtakes, EP's Live shows and all sorts. They also reissued some of their key side projects such as Robert Calvert's 1st solo album , Psychedelic Warriors and Hawklords debut. However it would appear that Hawkwind were unable to or unwilling to purchase the rights to their classic first 4 studio albums and the seminal live double album "Space Ritual" the rights for these belong to EMI and I can't imagine negotiations to procure those could have been easy! However EMI took it upon themselves to reissue/remaster & expand these themselves,, though not quite as exhaustive as the Atomhenge releases they look and sound great and come with some essential bonuses. There is one more small thing I felt I had to add! Seems like for some reason not one of these amazing reissues contains Hawkind's most famous song "Silver Machine" so you will also find below a little file with the original "Silver Machine/Seven By Seven" 7" below taken from the "Of Time And Stars" singles collection.

This brings me to your links... The original intention behind this post was to bring you the complete (or as near complete as my research can tell me) set of Atomhenge Hawkwind reissues along with the key side projects I mentioned in the last paragraph. However I felt that if I was NOT gonna do a discography the least I could do was give you the Atomhenge albums plus the absolutely essential first 5 albums on EMI too! As it seemed a shame that you'd miss out on the first 7 years of the band.

I have not as yet talked about the music of Hawkwind they are a band as undefinable as they are great, taking in a plethora of influences over the decades and constantly changing but yet remaining consistently Hawkwind. you are either a fan or not and I doubt that you're likely to come across this post just casually browsing for Hawkwind. I guess this is, selfishly or not, a post for fans. If you are a regular visitor and you really are just curious then maybe start with the double Live album "Space Ritual" or later double Live album "Live Chronicles" whilst vastly different coming some 15 years or so apart and despite being live these were among the first Hawkwind I heard and I definitely think if you want a feel of the band these would be your best place to start.

So here's a guide to your links with a brief overview of what's extra on each release. ALL albums are remastered so I won't be mentioning that again. (Note - the list below is in chronological order but the links are not, as I added them as they were done uploading as I have been working on the uploads for weeks as the total size of these files was not far off 5GB and the albums individually took between 1 & 2 hrs each to upload as almost ALL of these are ripped from my own CD's at 320KBPS the ones that are not are also at 320KBPS for best quality I can give)

"LIVE CHRONICLES" (1986) - Live on the "Chronicle Of The Black Sword Tour" expanded from a single to a double CD and has an additional 6 tracks and is restored to it's original format with narration sections being separate tracks.

That is that then a huge collection of Hawkwind and one of, if not THE biggest post to date! I hope this gives some of you fans some things that you can't get easily as almost all of these Atomhenge reissues are out of print, some can be found for reasonable prices on places like discogs and ebay but some are commanding prices in the £20 - £40 region I've been trying to get the Atomhenge version of "Sonic Attack" for quite some time!!! So Enjoy & Remember 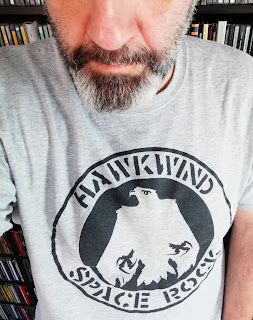 Kind reader Mattack has done a spotify playlist for this post clocking in at nearly 32 hrs!!! He has also done it in chronological order too! Much as I hate spotify I have to accept a lot of people get their music there rather than clunky ol' free downloads! So here you go and thank you mattack!
HAWKWIND ATOMHENGE & ESSENTIALS SPOTIFY PLAYLIST
HAWKWIND - EMI/ATOMHENGE EDITIONS

THE CHRONICLE OF THE BLACK SWORD - Mediafire

X IN SEARCH OF SPACE - Mediafire

HALL OF THE MOUNTAIN GRILL - Mediafire

IT IS THE BUSINESS OF THE FUTURE TO BE DANGEROUS - Mediafire

WARRIOR ON THE EDGE OF TIME -  Mediafire