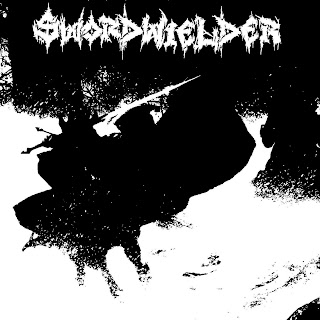 I just discovered this GREAT Swedish band today I saw them mentioned on Misantropic's Facebook page (see my post on them HERE ) so went to see if they had a bandcamp page and they did, and they are offering their 4 track demo from last year for free. And the demo is amazing this is epic crust with the emphasis on EPIC I haven't heard the like of this since Axegrinder's "Rise Of The Serpent Men", Filth Of Mankind (See my post on them HERE) or the best of Amebix! It's only 4 tracks but clocks in at 26 minutes, it is a demo recording but the quality is really good! I cannot hurry you along to get this quickly enough it's an amazingly accomplished demo not a D-beat in sight this heavy and well written demo really takes you on a journey and with a song title like the near 10 minute "With My Dying Breath I Curse This World...Another Sun Will Rise" I'm sure you get the idea?? I'm really excited on discovering this as much as i love the full on fast heavy wall of brutality crust it's really refreshing to hear a band lower the pace a little and use dynamics so well in building the music up and bringing it down and building it again! as i've said I can only describe this as EPIC a lot of bands are compared to the likes of Axegrinder or Amebix and it's more often than not a valid comparison but these guys TRULY are the successors to that sound and bringing their own style to it as well and definitely streets ahead of all the other type of bands doing this sort of slow/mid paced crust type music!!!!! go get it free from bandcamp now or you're missing out on a REALLY fucking amazing band that I expect to be hearing big things from soon!

*UPDATE* I emailed these guys for some more info apparently they have re-recorded all 4 songs from this demo and some new ones for a soon to be released album. I shall keep you posted!!!

*NOTE* in case you missed it you can now download their IMMENSE debut album from Bandcamp free of charge go see my post with link HERE
Posted by Dave Ballantyne at Sunday, March 24, 2013