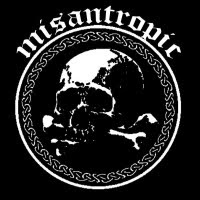 Misantropic are a female fronted 5 piece Swedish fast heavy crust/metal band with a mini album and a split 7" out so far, their bassist was in another band called  Personkrets 3.1 who i have never heard of but they did a split 7" with Swede crust titans Human Waste other than that they would seem to be a totally "new" band which is pretty cool! I downloaded both their releases and it would seem that female vocalist Gerda is a new addition to the band because the 2 songs on the split EP are also on the mini album but in different versions, as from listening to the split it sounds like a male voice.
My knowledge on this band is lacking as though the split EP & Mini LP are from 2009 and 2011 respectively I only became aware of them this week because someone posted a video on my F/B page!(Cheers David Insurrection) I'm gutted because I have listened to little else since I got it! This is some RAGING fast crust but with a very slight death metal  influence (when i say "death" metal think old school like Entombed or Benediction and not the shit with corpse gargling vocals and repetitive drum blasts) plus some tight double bass drumming here and there and Vocalist Gerda is one of the best female vocalists I've ever heard in ages, the sound is Immense great production throughout everything is perfectly clear and level nothing is buried in the mix!
A good comparison for these guys would maybe be the Night Nurse demo I posted up a while back (HERE) which is also fucking raging, but these guys even leave the awesome Night Nurse in the dust!! I hate to keep saying this about female fronted crust bands but again this has Sacrilege written all over it especially in the vocals it's been wrecking my head while listening to it who Gerda sounds like and well it is Tam from Sacrilege absolutely no doubt in my mind! If you think I'm being lazy with the Sacrilege comparisons all the time and lacking female references then you're probably right but shit download it yourself and you'll see what I mean! I cannot recommend this band highly enough they absolutely fucking DESTROY! Every piece of the mini album the songs, production,vocals,guitar,drums & bass every single bit of it hit's the fucking nail squarely on the head for me utterly jaw dropping and the best "heavy" release i've heard so far this year! Go Go Go NOWWW!!!!