So I'm starting a little series of posts here which I'm gonna call BRIT METAL because in the early 2000's there seemed to be an explosion of great British (Insert your own pointless genre splicing here) metal and in a lot of cases the bands i'm featuring either languished in obscurity or maybe only did one album and dissapeared so I decided even tho most of the stuff i'm posting may well be cheap & easily available to buy (some of the albums i got from amazon for literally a couple of quid including the postage so if you like something go have a look) and i definitely think the fact that a lot of these bands were british is what held them back if they had been american I'm sure the metal crowd here would've propelled them to stardom (!!)
Anyway it's all gonna be headered BRIT METAL I'm not breaking it down into subgenres as theres a theme to it that is that we have and do have some of the best bands in the metal genre and we fucking well invented heavy metal so it's about time some of these bands had some recognition! I'll be doing my usual rambling blurb for each post so try reading some of it to find out if you think it will be your kinda thing! 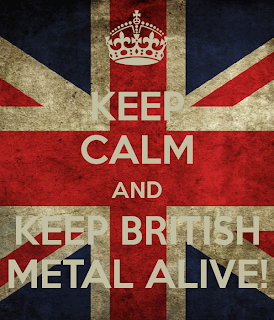 *NOTE* I am SCOTTISH not English however we have never been exactly overwhelmed by great metal in Scotland! Just in case anyone thinks i'm coming over all patriotic and shit for England!!!
Posted by Dave Ballantyne at Thursday, March 07, 2013