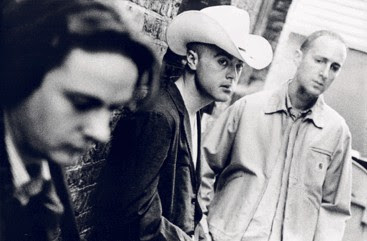 Scott 4 (Named for Scott Walker's 4th album)were an unusual band existing from 1997 till 2002 and then kinda quietly disappearing, they went from obscure indie releases to being signed by Sony doing a brilliant album a few singles went back to the indies then disappeared for a while, re-emerging as The Scott 4 Free Rock Orchestra in 2005 and releasing one album before disappearing again! and I can't find any trace of it's members having done any other musical projects. Allmusic describe Scott 4 as "Electronic cowpunks for their blend of country-blues, hip hop and indie-punk" and that pretty much sums them up!

I discovered Scott 4  back in the days before internet was easily available, y'know? The good old days where you would go to record shops, pick things up that looked interesting and maybe talk to the shop assistant about what they were like? I saw their "Elektro Akoustic Und Volksmechanik" Mini album it was presented as a 10" and 7" in a striking black and white sleeve and I thought it looked interesting so I bought it and a week later I went back to the shop for the "Recorded In State" debut album! I followed them through to their last release as Scott 4 and promptly forgot about them ha ha I later replaced my vinyls with CD's  which is possibly an indication of them being good otherwise why would I bother?

I hadn't listened to them in a long time when I considered them for posting and I am re-listening now while I type this and despite thoroughly enjoying them here I do think maybe being 20 years old in some cases this music sounds kinda dated in places they are a hard band to pin down their sound is lo-fi on the early releases (Your first 2 links Deutsche/Eleckto & Recorded In State) swinging from slightly Beck-esque beats and country vibes to short ambient pieces to beautiful and fragile acoustic tracks there's certainly a lot of variety on offer. What's great about Scott 4 is their music whilst very easy on the ears with catchy songs and great melodies there's an experimental feel which along with some of the titles of their albums makes me think they most definitely have a Krautrock influence too something not mentioned anywhere else in regards to them. This all changed when they signed to Sony their first release was a CDEP featuring a  re-rerecording of 2 tracks from their early releases A new shorter version of "Your Kindom To Rust" from their debut album and a staggering 23 minute version of "You Set The Scene" from their "Elektro..." mini album the latter definitely showcasing their free Krautrock approach to playing! However their Sony Debut "Works Project" was a different prospect altogether whilst still sounding like Scott 4 "Works Project" had all the lo-fi scrubbed off for a far more polished and accessible sound. Now normally this would send me running and accusing the band of selling out however this is not the case here this is a fantastic album whilst as I said above it may sound a bit dated being now 20 years old it shows that Scott 4 can write TUNES! there's some supremely memorable and catchy earworms on the album but also they seem to have harnessed their Krautrock influence and blended it into the country/indie sound  making for a sorta Jaunty sound not too far off the lighter moments of Faust from their "IV" album. The thing with Scott 4 is whilst most definitely an obscure band and even though they coming from an experimental approach originally they are not a band that are hard to listen to or need deep investment you will either like them instantly or not, it's not a case of sitting chin stroking and thinking hmmm "I see what they may be trying to do there". After leaving or being fired from Sony (I Don't know) They did one further album under the Scott 4 name a collaboration with Magic Car called "European Punks" I am not a fan of this album having taking all the good things I liked about Scott 4 and sacrificing them for a far more smooth and accessible pop edge and  I really don't like it myself too much group backing singers and piano ballady soppiness for my tastes I include it here for completions sake only and would probably give it away if I knew anyone who wanted it!

So onto your links before I confound you further with my inane waffling! In your first link you have their first 2 mini LP's "Deutsche LP Record" & the aforementioned "Elektro Acoustik Volksmechanik" Separated into their own folders with artwork etc. Second link is their brilliant "Recorded In State" debut LP which might be a good place to start as it falls between the lo-fi feel of the first 2 and the more polished sound of the Major label debut. 3rd link "Works Propject & Your Kingdom To Rust" rounds up all the material from their Major label era I have added 3 extra B-sides to the "Works Project" album from the various singles that were released around the album. The final link is the (IMO) terrible collaboration with Magic car it's nothing like the rest of their material so download at your peril ha ha! All music ripped from my personal collection direct from CD at 320KBPS.

This is yet another case of a great band that faded from memory despite major label backing and some fantastic music released here's hoping this post goes some way to maybe a few more people hearing and liking them.