HIDDEN GEMS FROM A FORGOTTEN 70'S 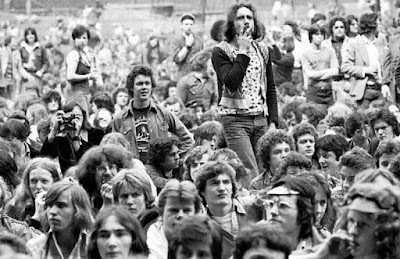 As you may know I like to bring you strange and obscure music and these 4 are pretty damn obscure bands and albums! I am a big fan of 70's rock and Krautrock in particular and this has led me to delve deep into the recesses of the net for stuff to check out and I came across these 4 absolute blinders over the course of my searching and figured as, even though they have been reissued numerous times should definitely be given a wider audience!

First off I have to be honest I don't know a great deal about any of these bands I either liked the covers of the albums or came to them through random browsing of blogs and liked the description plus as these bands have mostly only done one album and really went nowhere information is sparse. If you want to know more then I guess you can do some digging but I will do my best here but for me it's all about the music! So lets begin..... BLUES CREATION - "DEMON AND ELEVEN CHILDREN"
I had no idea really that Japan had a burgeoning heavy and psychedelic rock scene until someone introduced me to Flower Travellin' band a few years ago (Might do a post on them if anyone likes this post!) This led me to investigate further and discover some real gem,  however the pick of the bunch was these guys! So much so I splurged near £20 on an original Japanese copy of this album on CD. Released on the Japanese arm of Columbia records in 1971 this their 3rd album is quite a progression from their debut! You'd be forgiven for thinking this would be some fairly standard blues rock with the name however the cover drew me in and I'm glad it did because this is one of the best heavy rock albums i have heard from the era! This album just absolutely ROCKS! wearing it's Sabbath and Deep Purple influence boldly this takes that sound into the stratosphere Reminding me a lot of the 70's output of  Pentagram (see post HERE ) and although they could never have heard them and predates this band the tempo and attack remind me of Death (Detroit) in places as well (See Post on Death HERE ) There is one minor blip where they descend into pure blues boogie territory on 2nd track "Mississippi Mountain Blues" But I guess the clue is in the title! But opener "Atomic Bombs Away" Lives up to it's title bursting out the gate straining at the leash! and third track "Just I was Born" is so blistering it's hard to believe it's 50 years old! Minor niggle about "Mississippi Mountain Blues" aside this is as brilliant a rock album as you will find! Every song bursts with an energy that just leaps out of your speakers and if you were anything like me have you setting your sights on 70's Japan!!!! 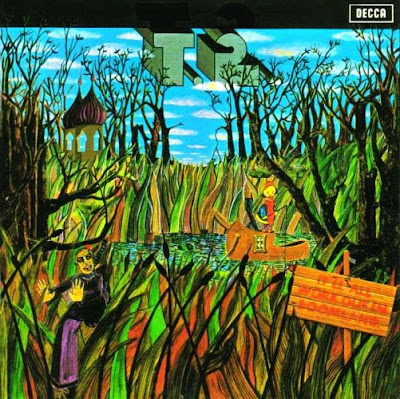 T2 - "IT'LL ALL WORK OUT IN BOOMLAND"
T2 from the UK are a slightly lighter prospect than Blues Creation but no less rocking "It'll All Work Out In Boomland" was their only studio album released in 1970 on Decca records a label I had no idea had released some choice bands associating them more with pop and Rock 'N' Roll! This band definitely lean more towards the Psychedelic and jam style you'd maybe associate with the Californian scene of the time but with a more British take on that sound. There's meandering (in a good way) bass lines and lots of psychedelic wah wah guitar jamming (reminiscent of early Stooges but nowhere near as ferocious!) over the supremely tight rhythm section and boy can these guys play! This album has great dynamics too with the songs building to fantastic peaks along with some absolutely amazing drum work that is loosely played but astoundingly tight and there's grooves aplenty that will definitely have you nodding your head in appreciation! These guys petered out after the debut album though in 1970 it's claimed they played more headline shows at London's famous Marquee club than any other band. Unfortunately tastes change and T2 kinda fell behind when the rock scene began to favour the new Glam Rock and the age of the heavy rock titans began to wane! T2 could not find a home for their music and subsequently called it quits in 1973 they reformed in 1975 and again in 1990 and released a few more albums but I haven't bothered to check them out I'd rather keep the brilliance of this 1970 album intact! (Note the album contains a bonus BBC live in the studio session with 3 blistering renditions of the album tracks) 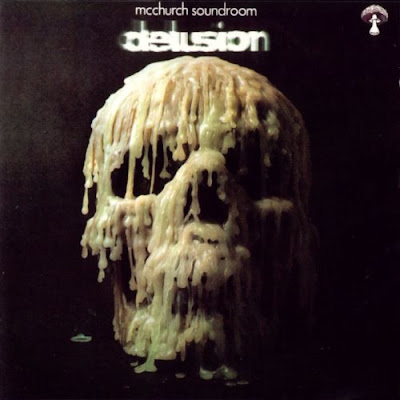 I came across McChurch Soundroom on a "Top 20 greatest Krautrock Albums" though being from Switzerland should have surely discounted them from a list about a German scene? but I'm glad it was in there or I'd probably have never found this album! Originally released in 1971 on Pilz records from Germany what first got me interested was the cover (see above) however the cover does kind of mislead as this looks like it'd be some sort of occultish heavy rock right? I can firmly state it is not! This band are a 5 piece and whilst it definitely falls into the "rock" category this is far more leaning to the prog/kraut/psychedelic end of things I wouldn't say it's not heavy it's got plenty of those butt shaking 70's groove riffs and again these guys really wail on their instruments! This album has quite a loose jammed sorta feel and it's maybe a little heavy on the flute freak-outs and the albums longest track at over 9 minutes "Delusions of a drummer" is well.... mainly a drum solo with some other instrument solo's thrown in their. I'm making this sound a bit messy, it's not, the playing is, as with most bands of this era tight, confident and accomplished I mean you can't jam or solo if you're not good right? For me this album reeks of hashish smoke filled rooms, indian rugs, flares and long hair! However it's sassy and cheeky grooves just draw you in and make for an utterly compelling listen! The organ wails, the bass jams, the guitars shred, the flutes freak out and the drums are insane! all topped with a great vocal there's absolutely nothing about this album that I don't enjoy. 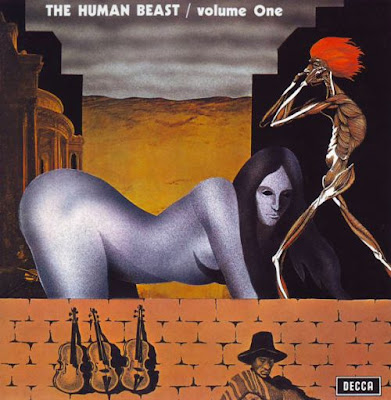 THE HUMAN BEAST - "VOLUME ONE"
I'm very glad to be able to add these in this post not just because this a great album but I discovered after I bought it they are from my homeland of Scotlland! The Human Beast again released only one album falling victim to the same line up instabilities and changing tastes of the early 70's Hailing from Edinburgh these guys amassed quite a following on their local scene and the gigging circuit of 70's Britain however they never quite managed to capitalize on this and make a "Volume Two" unfortunately. This album was originally released as with T2's debut on Decca records, ploughs a similar furrow to both T2 and Mchurch Soundroom above though less jam out than Mcchurch. Again Confident and accomplished playing here lots of wah wah guitar and bouncing basslines and excellent drumwork. This is easily as good and groovy as any of the other albums I have posted here! Again falling into the Psych/Prog/Heavy rock territory as has been the theme of this post! I feel I've kinda exhausted my 70's euphimisms here and really comparing one obscure band to another probably doesn't help you the reader however I have provided you with free downloads so really what have you got to lose by checking these out?
The 70's is obviously lauded as a great era for rock where bands like Led Zeppelin, Deep Purple and Black Sabbath ruled the world but for me it's by delving deeper that you find the real gold I mean every member on ever album here were extremely accomplished players and had obviously put some intensive work in both in learning their instruments and honing their tunes by getting out and relentlessly gigging and for me this is the tradgedy! I mean every band can't have global popularity but it just seems such a shame that these 4 bands languish in deep obscurity and seem to get found by the likes of me digging around the net joining dots etc when the work they must have put in to be as good as they were deserves much more attention! The one great thing is there is no shortage of labels out there officially and unofficially keeping these albums in print remastering etc so there must be in some small way a market for this music some 50 years down the line! I guess that's at least some small reward for all their hard work.

Here are your links all uploads taken from my own collection (See pic below) directly ripped from CD at 320KBPS all albums are remastered from their original master tapes according to the sleeves.

T2 - IT'LL ALL WORK OUT IN BOOMLAND - Mediafire 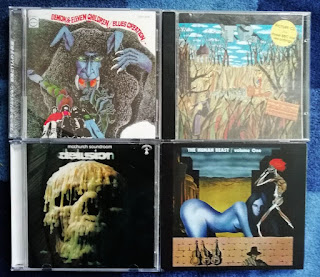