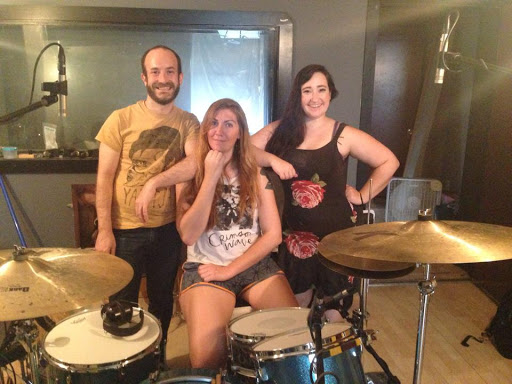 Looking at this picture you'd be forgiven for thinking that these guys play some pretty jaunty indie type stuff right? They are a happy looking bunch! However this is definitely not the case here!

Based out of Washingthon DC  Jail Solidarity play some serious dirgey, hate filled, NOISE! They haven't exactly been a prolific bunch either, between 2013 & 2016 releasing a mere 2 cassette EP's and a 3rd cassette Split with Clean Girls. This is another band I can't give you much information on as there is little to be had on the net it's another case here of me trying to bring you some stuff you may not have heard before by virtue of my trainspotting and net surfing!

So onto the music I thought I might have been a bit hard on these guys above calling them "dirgey hate filled noise" but upon re-visiting as i type this I wasn't wrong.The tempos are mostly slow - mid paced the guitars are really put through their paces too, loud sustained crashing chords tempered with noisy thrashing parts, the distorted bass bubbles underneath providing solid bottom end to the sound ! The vocals are both male and female and are definitely in the tortured anguish style not screaming as such I hate screaming vocals but they are definitely angry! The best way I can put this to you is that it has an almost Industrial sound to it but by that I means something like Swans early albums or Big Black at their most experimental and noisy crossed with Flipper at their least humorous! This is not something I can listen to all the time it absolutely dominates the room with it's sound but I have revisited these guys a few times and have loved them every time I have played them!

Bodycop are in this post because it was a one off project predating and featuring members of Jail Solidarity It was actually someone posting this one Bodycop release in a facebook group I was in and mentioning early Swans (The name Bodycop is I would say an amalgam of the Swans album titles COP and Body To Body Job To Job) that led me to discover both bands. Whilst not a million miles away from the sound of Jail Solidarity this time with Bodycop the sound is 100% a tribute to early SWANS particularly the "FILTH" album (their debut) it has the same tortured/Anguished feel as Jail Solidarity but has l;ess of a guitar noise feel and more straight ahead Industrial the rhythms are pounding the bass is heavily distorted but has that perfect Industrial klang to it whilst electronic noise whizzes around in the background too and all topped with Lydia Lunch-esque vocals. If you like Early SWANS and can't get enough then these guys are definitely for you!

Onto your links in the Jail Solidarity Link is all 3 of their releases the 2 Cassette EP's "Pretty Good Privacy" & "Any Space Whatever" plus their side of the split Cassette with Clean Girls. Bodycop only released one cassette in 2010 but it clocks in at half an hr making it practically an album! all Files are at 320KBPS but I sourced them from the net so they may be cassette rips as the quality isn't pristine but I can't imagine it being any better from any other source due to the noisy nature of the music!
Not for the faint hearted these bands but I can imagine there will be a few of you that have enjoyed my other posts who would have hiot download at the mention of early SWANS ha ha! I hope so anyways... ENJOY!
JAIL SOLIDARITY - Mediafire
BODYCOP - Mediafire
Posted by Dave Ballantyne at Friday, March 26, 2021