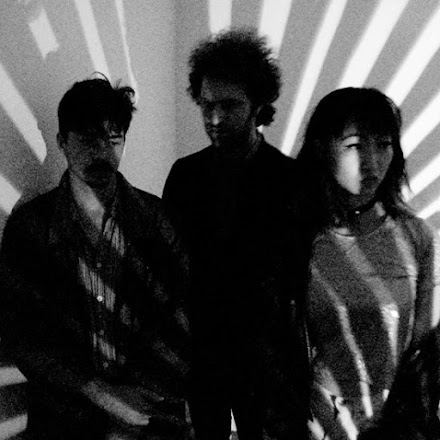 Second Still are a fairly new band to me, I was sitting in the garden with my partner a few months ago and she was playing some music and a song came on and it had what I would describe as a classic Post-punk bassline to it. it really caught my attention as did the glacial guitars and sultry female vocals I asked what it was and it was Second Still "Try Not To Hide" Later I did my usual obsessive Trainspotting thing and now I own both their albums ha ha!

Second still hail from Los Angeles California described as Post Punk/Coldwave I don't really know what the latter is because I'm not up to date with the latest genre terms the kids use these days I'm a sorta 2 categories guy GOOD music and BAD Music but I defo agree with the former! They are a 3 piece band Bass, Vocals & Guitar they utilize a drum machine for their rhythm. Normally I'm not that keen on drum machine unless it's used in a pounding way behind Industrial music however in Second Still it works really well because it fit's their 80's -centric sound perfectly!

There's not a great deal of info available on these guys they appear to be fairly obscure so I'll give you a brief description of the music. As I said these guys have defo been listening to a lot of 80's goth and post punk there's shades of Siouxsie & The Banshees, Joy Division and the darker end of Synth pop though I don't hear a lot of electronics in their sound it's more of a feel from the effects they use on their instruments (reverb) and they have definitely learned their craft well as I find myself wrapped up in warm nostalgia here and there when certain song parts come on. Whilst I may be making these guys sound very derivative they are not as such, they seem to capture a feel of their influences more than directly taking things from them which is the key to their brilliance for me. Their music whilst quite dark is offset by the really nice vocals falling somehwere between the croon of Siouxsie Sioux and Hope Sandoval of Mazzy Star's warm and beautiful tones. The guitars are effected and have that classic sorta plucked thing combined with big swathes of SHRIIIIING! However what I love most is the bass lines they are just so memorable they really play less like a rhythm instrument and more like an equal to the guitar and make a fantastic counterpoint! What I also like is occasionally the guitars will burst into big chords that remind me of the 80's again but more the bigger rock bands like U2 when they weren't stadium assholes and Simple Minds when they were good or even Big Country? This is again just a feel they sound nothing like any of those bands!

These Guys have been around since 2016 and have released 3 EP's and 2 albums and I present them all to you here Their sound is consistent throughout so I don't feel there's a need to go into each individual release. However my personal favourite is their debut self titled album (First link below) so if you're curious I'd start there. I really like this band a lot and they have been regularly played in my musical rotation and i can't see how anyone couldn't enjoy this brilliant sound!