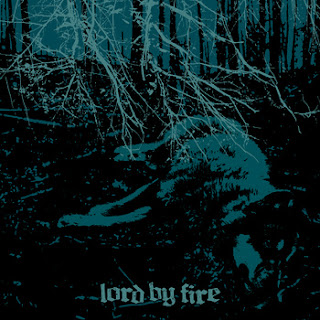 Sticking with the Sludgy/Metal theme here's Lord By Fire from Richmond Virginia USA. I was gonna upload their stuff myself for this blog but when I was looking for a pic i discovered they offer almost everything for free at the wonderful Bandcamp! I found these guys back in the pre-facebook days on myspace liked their sludgy metal a lot and got chatting to them on there and bought their first CD "Sword" which is where their woeful tale begins the band were actually called Sword and their debut CD was called "Lord By Fire" but they came out same time as a certain other rising band and were politely contacted by now HUGE Texan stoner titans THE Sword and politely asked to change their name! So to save a lot of hassle they just switched the title of the EP and the name of the band round and became Lord By Fire! Lucky for them it's a pretty cool name or that their first EP wasn't called Brutal Shit or they would've been in trouble!

Onto the music most of the guys in this band were in a metallic Hardcore outfit called My War who only did 1 demo (Which they kindly enclosed a copy of when they sent me my Lord by Fire CD) then they broke up and became Sword then Lord by Fire. When you listen to their stuff as well as huge slabs of riff heavy stoner sludge you will also hear little flourishes of Metallic hardcore especially in the vocals which are quite raw and not your typical style you'd expect for this kinda music! Closest thing i can compare them to is some of the half decent British metal bands that were doing the rounds in the early part of the millenium like Charger, Raging Speedhorn or Iron Monkey (Though without Johnny Morrow's unique sick vocal style) Tho they are not exactly like any of them but if you like those bands and that sorta style this is right up your street!

So The Links... I've given you Bandcamp links to the Sword CD EP from 2005 , their second EP "Relics" from 2010 and a link to the $2 pay download of their 2008 7" but in order to make your little collection complete and free I've also given you my free link to the 7" so you can take it for free or pay a measely $2 and give them some support it's up to you. As a bonus i've uploaded the My War 2006 Demo as well cos it's really good and not a million miles away from what they ended up doing with Lord By Fire it's also  obscure little piece of their history and not available anywhere else online (tho they may still have some of the CD's lying around mail them through bandcamp if you really want one)

Or Take It Free Here - Mediafire

I'm directing you to their bandcamp to save my online space for other things as these downloads are exactly the same as mine except for the debut "Sword" EP which I actually own, but on the CD the tracks are mixed into each other, the free download they are offering has the tracks separated which after downloading it and listening myself I have to say works MUCH better and quality wise theres no difference between my CD rip and their freebie. Also the first two bandcamp links you don't even have to suffer the guilt of entering 0 in the "pay what you want" box it's a simple free download just click on the links and Bandcamp will do the rest! pretty decent these Lord By Fire fellas!