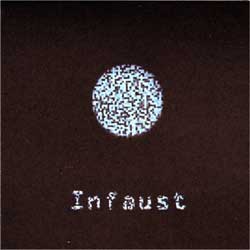 Infaust from Germany (NOT to be confused with what appears to be a black metal band using the same name) existed in the late 90's they did one album a 12" inch and a split 7" with Japanese sludge/drone extremists Corrupted. Unfortunately i don't own the vinyl releases i do however have their one and only album "Muster" which i've uploaded here for you (320kbps from my own CD) again another obscure overlooked and forgotten band heres what it says on Discogs about them....

" INFAUST rose from the ashes of HYPOCRITICAL SOCIETY. INFAUST is influenced by english industrial hardcore like Godflesh or Pitchshifter), later Amebix and mid-time Neurosis. Their German lyrics are unfriendly ("Arschgeburt"), abstract ("Muster") and mostly work up their personal post-industrial depressions. "

I would pretty much agree with that except i don't  hear "Industrial" as much in the sound as i do a definite "Souls At Zero" Era Neurosis influence which was pretty unique at that time because back then Neurosis were the ONLY band that sounded like Neurosis!! I also definitely think they fit nicely with some of the darker less "crust" bands that were on Profane Existence around this time like Christdriver & State Of the Union. This one and only album was released on German Hardcore/crust label Epistrophy records and was originally played to me by Ste of Extinction Of Mankind (Cheers mate) my point in mentioning that is it will appeal to both fans of crust and post metal alike!

Anyway this is a great album and it's a shame they didn't do more i have the album for about 13 years and i still play it quite often it's a classic in my opinion and has stood the test of time as well. I will say that the production is a little quiet and lacks bottom end a little as well but i suppose they probably couldn't spend too much on recording it but if you turn up the bass and the volume just a little I'm sure you will find this to be a GREAT album!