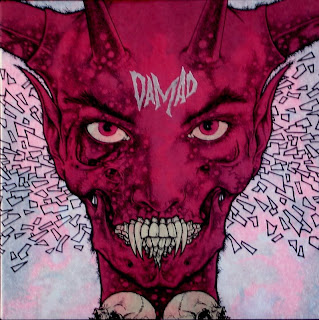 A double whammy post for you here, Damad were a band from Savannah, Georgia in the U.S. that existed from 1994 - 2000 after they split up 3 members went on to form Kylesa, Unfortunately Damad and founding Kylesa member bassist Brian Duke died from an epeleptic seizure during the recording of Kylesas debut album and now  Philip Cope is the only remaining Kylesa member formerly with Damad.Vocalist and provider of artwork for Some of Damad and both of Kart's releases Victoria Scalisi and drummer Scott Duke went on to form Karst. Right that's the Kylesa connection dealt with onto Damad... So Damad had a very unique sound for the time, super heavy sludgy guitars mixed with a touch of industrial, and a big heaping of fat metal riffage, some spoken political samples and electronic noises add this Victoria's fucking brutal vocals and you had one serious wall of noise, though never quite reaching any serious "Fast" tempos their fanbase was mainly based in the political/crusty punk scene and along with Neurosis in my opinion are pretty much resposible for the sound that would later be known as Post Metal. Not that it's all just sheer noise there are some great structures and riffs plus some more "gentle" passages where Victoria is almost singing however if you're not familiar with the band i can assure you they are not an easy listen however if you have an ear for the more original and unique end of heavy music then this is definitely for you and the influence of Damad can be heavily felt in the early Kylesa recordings in fact when i heard Kylesa's first album i was convinced that they had just changed the name! Laura Pleasants of Kylesa and Victoria Scalisi being in my opinion the most BRUTAL female vocalists in heavy music!

So this is not quite a complete Damad discography I have been unable to obtain their "Dam Ol' Flag" EP their demo cassette or their Plus Equals Minus cassette (however i think 2 tracks off this were used on the "Rewind" 7" which is contained here) So here's what you get The First link DAMAD EP's contains their side of a split EP With In/Humanity, "Rewind/Manmade" 7" the "Centric" EP Their 3 Tracks from their Split CD with Meatjack and their track from the "Destroying Southern Tradition" Comp EP I have also uploaded first album "Rise And Fall" and 2nd and final album "Burning Cold". The Damad side of the Meatjack split and both albums are taken from my own CD's and are the usual 320kbps quality, the ep's and the comp track are from decent quality vinyl rips.All of these are great recordings theres not one bad track amongst them theres some great ideas and enough original and fuck off heavy riffage to satisfy any fan of heavy music! 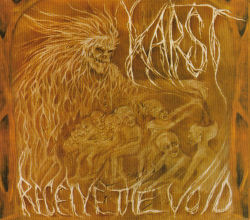 So onto Karst... Karst as I've said were formed after Damad split and only released an EP and one album, both of which are not that far removed from what Damad were doing Victoria's vocals are still as brutal as they ever were except I would say whilst Karst are still heavy as shit their guitars are not quite as downtuned and sludgy as Damad's were and there's a slight upshift in tempo's as well making them a little more frantic and less of a bulldozer of sound like Damad overall there's a slightly more hardcore feel to the music (When i say hardcore think of the more original bands like Dead and Gone, Born Against, Econochrist etc) but overall i could not see anyone who liked Damad not liking Karst.
So I have uploaded both the "Receive the Void" EP and the "Vision Of Insane Hope" album for you both at 320kbps from my own CD's which is everything they did.

I don't know what Victoria Scalisi is up to these days I think she still does artwork for bands and i think some a member of Damad or karst may have been in Baroness but if anyone knows feel free to comment! In the meantime enjoy a double dose of some really original musical brutality!