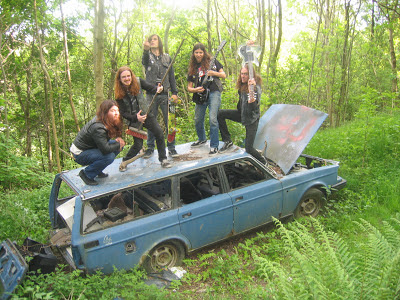 This is the first part of 4 related posts not neccesarily by band but definitely by music! First up is Annihilation Time formed in 2001 from the ashes of X625X Records thrashers Gordon Solie Motherfuckers, A.T. had a few line up changes mainly in the vocal department 1st album having Fred Hammer on vocals but from the Bad Reputation EP till the end vocal duties were handled by Jimmie Rose. Anyway so take a core band of beer drinking bong smoking punk metalheads with a serious Black Flag/BLA'ST! obsession, add in some healthy 70's rock/metal flashiness and you got Annihilation Time, For me A.T. are one of those bands who totally take me back to the old school days of being into hardcore was more like punk y'know, beers, skating, smoking, rebellion & FUCK YOU! middle finger raised high! What I mean is whilst having a seriously crunching sound and plenty of fat rock riffage and they still retain enough balls out agression and a harder edge but they tend to have a less political more punk rock kinda stance where you know the band are  pissed but at the shit of their daily lives rather than specific political targets which is cool for a change to just enjoy something musically without having to be too concerned about what they are saying! I think seeing these guys live woulda been a great experience! So I feel like I'm kinda making Annihilation Time sound a bit lame here best way i can do this is give you some idea of what they sound like so i hear elements of the following in their sound Germs, Black Flag, BLA'ST!, AC/DC, The Stooges, Thin Lizzy, Circle Jerks, Sabbath,MC5, Poison Idea the list goes on and i doubt they would diasagree with any of those! And there's not a bad band among them!

So onto the music 1st up is debut album "Annihilation Time" and with that logo and a Ray Pettibon cover you knew this was gonna be awesome..... 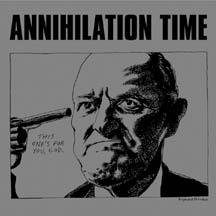 This is probably the most hardcore of the 3 albums having that hungry ferocious 1st album hardcore band feel! There's still rockin middle 8's a plenty and even tho this is the most Black Flag/BLA'ST! sounding as well it manages to stay mainly away from the usual flag/BLA'ST! pilfering and has it's own style going for it a fucking great debut! But first and last for original vocalist Fred hammer.. Step up Jimmie Rose... So a new EP and a breaking in of new singer for the "Bad Reputation" EP 4 Tracks 3 new and one sterling hardcore cover of Thin Lizzy's "Bad Reputation" Of the 3 originals there's not much to pick from them they are all good however opening track "Fast Forward To the Gore" has a fucking tasty intro which is pure Greg Ginn meets Tony Iommi!  Jimmie Rose is a more than capable replacement and the band feels more solid on this and subsequent releases Next was "Annihilation Time II" what a follow up!! unfortunately whilst it's a great album it suffers a bit from a tinny production the songs are great just the sound is a bit thin and less crushing than before maybe just down to budget production this is hardcore after all! However thankfully the tunes are so great you won't care what I've said! Real progression from first album this album whilst tight and hardcore most of the way through manages to hit on some great slow jam mid sections pillaging the best of scorching garage/stoner riffage! Never letting up track after track of killer skate trash fucking punk rock! Plus the aforementioned "Fast forward To the Gore" gets a slick new version as well! next up was the 3 track "Cosmic Unconciousness" EP only available on 7" or on the rare and limited band released "Incomplete Discography" It's a shame this hasn't seen a proper CD release as it's a killer EP the title track has a great sample then an awesome rock/metal intro then into the scorching sunburnt fucking punk riffs classic stuff and the Flag/BLA'ST! motif is definitely prevelant again! the other 2 tracks the re-recording of "Annihilate" from the debut album & "Feel It! are both blistering Annihilation Time business as usual! Lastly is "Annihilation Time III : Tales Of The Ancient Age" This is still as great as the other 2 albums however i have to say that on this one there is no masking the fact that "Rock" is first and foremost for these guys now whilst the chugging fat skate punk riffage is still plentiful there is a far more accomplished display of musicianship going on and there's a lot more rock descends and soloing and shit on this album than before although it had been creeping through all the way along! Anyway this is still good if you liked the other stuff you will no question like this album it's just a progression from the last and these guys have developed some serious chops but you still get beaten around the head with the punk rock with blitzes like the 1min 49 sec "Jonestown"! Jimmie Rose is definitely finding his feet and has become far more confident especially on a track like "Bald-Headed Woman" which is just pure rock fury man!!!

So that's it a great discography by an utterly awesome band if you haven't heard them and you like the stuff i post on here that doesn't have "Crust" in the description and more towards the ones that say "SST" then this is definetley for you! All ripped from my own CD's at 320kbps except for "Cosmic Unconciousness" which is from a 192kbps rip of the Discography CD.