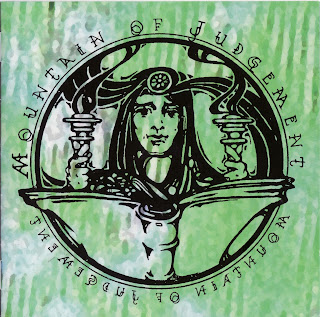 So didn't take me long to decide on some new posts eh?? I forgot about this album until i was browsing files for some inspiration! so here you have the one and only album by Mountain Of Judgement these guys are a "stoner" band from Carolina U.S. this as i say is their one and only album as 2 members are busy with their other Bands U.S. Christmas and Hour of 13. Now don't let the "Stoner" tag put you off I'm not a pothead any more and I can still enjoy this music so owning a bong and a Sleep t-shirt are not essentials for digging this shit maaaaaan (Though it certainly wouldn't impair the experience ha ha)!
This is a great album that stands head and shoulders over the fucking MYRIAD of "stoner" bands out there and I'm kinda glad that it is a one off thing. This project was a bit of a stop start thing they formed the band in 2005 did some recording went off to work with their main bands and when they came back to the original recording it was decided to re record much of it and this album contains the second recording session (tracks 1 -6) and 3 songs from the original session (tracks 7 & 8 as number 7 is two tracks) 2 of the latter 3 tracks are original versions of tracks re-recorded so you only get 6 original tracks and 2 repeats if you get me? but this is irrlevant when it comes to music of this quality. This is Stoner music of the highest quality and as far as I'm concerned is right up there with Sleep, Kyuss and the like, this has all of the hallmarks of great stoner music with none of the blandness of your run of the mill grunge meets sabbath bollocks, Great production, Thick heavy guitars and awesome fucking monolithic heavy riffage are prevalent throughout this album with the addition of the swirly US Christmas/Psychedelic style synths courtesy of Chad Davis (He's the MOJ member who is also in US Christmas and Hour of 13) and Scott Isenhour (Also a "floating" member of US Christmas) Anyway there's a far more informative page on Mountain of Judgement HERE which I suggest you read if you want to know more as I can't really describe this music without using the usual reference points like Sabbath etc and i don't want to make these guys sound unoriginal or boring I WANT you to download this album and see for yourself that not all stoner rock is generic as it has become these days go read the blurb at the link i supplied above then come back and download this utter fucking classic of an album.

And here's a psychedelic picture of the band.... 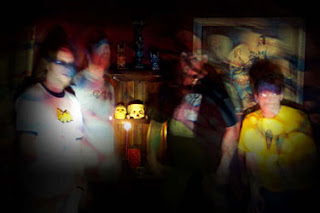