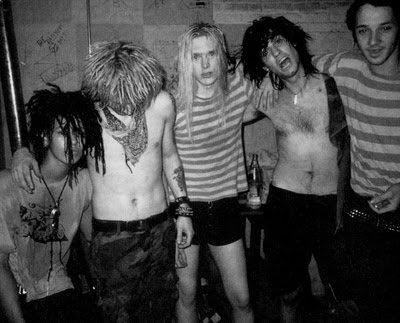 Jingo De Lunch were a "hardcore" band from Berlin formed in 1987 they had a long musical career releasing a live album as recently as 2011 however I'm only concerning this post with their Independent early years preceding them signing to a major in 1990. So I discovered this band through a friend of mine he had had a tape from someone and there were 2 songs from their debut album "Perpetuum Mobile" on it. we had recently discovered "i against i" by Bad Brains (We had yet to discover "The Roir Tape" or "Rock For Light"!!!) and we fucking loved it and so... this band Jingo De Lunch seemed to be taking their influence from this very album!!! So he got the LP eventually and we were both blown away. Although this band were definitely taking that influence from "i against i" they had taken the best bits!!! the chugging rifferama and lightning quick super tight guitarwork but with a healthy dose of rock thrown in there, Listening to them now the Bad Brains thing is still there but i hear so much more to em now i have a wider frame of reference! This considerable Bad brains feel was not harmed by the barking and snarling and sometimes brilliantly tuneful voice of  dreadlocked American Ex Pat Yvonne Ducksworth! These were a great band tight well rehearsed and with a really fucking ROCKING sound! So onto the music....

First up is debut album "Perpetuum Mobile" from 1987 "Bad brains "i Against i" had been out barely a year when it's influence was already being felt all the way in Germany! Whilst this album has it's influence written all over it i will say that there's no direct ripping off only in the sound and feel of the music and Yvonnes unique take on H.R.'s style! There's shades of fat early AC/DC style riffage (think the good Bon Scott stuff that makes your head start nodding instantly!) lightning fast guitarwork, tight rhythm section and each one of them in total sync! This is an unbeleivably confident and accomplished debut from an apparent "hardcore" band on We Bite records a notoriously great hardcore label from Germany who released MANY crucial albums over the years and all this from a band barely a year old!!!! Taken from my CD of this 320kbps

Next up "Cursed Earth" 10" (1988) and "Axe To Grind" (1989) now these were taken off a good quality VBR download of "The Independent years" Comp on Boss Tuneage  but when I broke the CD Up into it's parts because 1: It contained Cursed Earth 10" on CD in it's entiritey and it was right in the middle so i stripped it out and retagged it, However when i did the same for the album "Axe to Grind" i realised some tracks were missing from it so I've added these from another download of the album so it's of variable bit rate but i've retagged it and numbered it all tracks present and in correct order! and as usual i don't post rubbish quality stuff no matter how good it is! Cursed Earth contains 4 originals and 3 cover versions the 4 originals are Jingo De Lunch business as usual opener "Cursed Earth" being particularly good with a little HEAVY funkiness in the mid section! The covers say a lot and might give you more of an idea where this band are coming from "Cowboy Song" By Thin Lizzy "Pay To Cum" by Bad Brains and "Fuck You" by D.O.A. So even a year later the bad brains and hardcore influence is prevalent! This is a great EP and i'm glad it came out on that "Independent years" Comp as I had never heard it before! However I did used to have... "Axe to Grind" I always thought it wasn't as good as the first album when i had it originally but having revisited it it in recent years it's actually every bit as good as the first album the playing has however progressed to another level and with this comes more flashy lightning fast guitarwork and the rock influence is heavier here than on the first album but when i say rock you do know i mean the good stuff that even the very jaded can't help but stroke a beard look chuffed and start nodding to! All in all a 100% fucking solid follow up!

So that's your lot this is great stuff and i feel this band are largely overlooked and they were so fucking talented and enjoyable and al round fucking great from 1987 - 89 memorable songs great hooks cool as fuck and just rocking!These albums need more attention than they get that's why they are here! Plus they are hard to find online and I know when i tried to find "Perpetuum Mobile" I got so fucked off looking i bought it!!!  Oh and a personal opinion I could have maybe seen these albums being on SST at the time they were released think their unusual approach may have been enough but maybe a bit too rocking??

Axe To Grind - Mediafire
Posted by Dave Ballantyne at Thursday, May 09, 2013