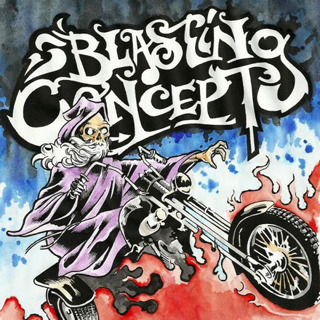 Blasting Concept have been around since 2009 but I only heard of them last year but I'm glad to have caught up with them! they are from the Santa Barbara / Oxnard area of California. All i can say about Blasting Concept is they appeared after Annihilation Time broke up but seem to have thought there's a gap in the market goooooo! they have wholesale ripped off A.T's sound and image to the complete MAX!!!! That sounds really bad but it's true i heard the name and related it to the SST comp "The Blasting Concept" and was interested enough to do some digging and i managed to unearth their 2 releases to date a 12" and an 7" and this is basically Annihilation Time's sound but a different band I really can't see how or why they would do it but you get the exact same 70's rock meets 80's california hardcore on a skateboard with a beer and a bong! From the band's profile on facebook.....

"We dig punk rock and heavy metal. try to weed out the boring bullshit and play some stuff with testicles"


So when i say all this yes they are derivative but if you like me can't get enough of California hardcore revivalism meets killer 70's rock/garage riffage like me then you need to download BOTH of these EP's right the fuck NOW! This is awesome ass kicking rock/punk of the highest fucking order.....

UPDATE - Blasting Concept have used my Links on their blog in order to give the music for free to the fans, Go check out their awesome blog http://blastingconceptsb.blogspot.com/  I feel tight now for calling them A.T. clones cos they didn't make me take my links down when they very well could have! I'm sorry Blasting Concept I hope i didn't offend but that's really what i hear but  A.T. were and B.C. are fucking great bands and i listen to you guys a lot! Hope that makes up for it?
Posted by Dave Ballantyne at Wednesday, May 08, 2013