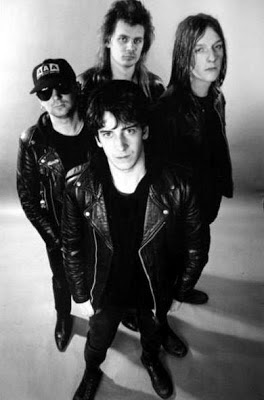 Head Of David (pictured above with a long haired Justin Broadrick (on the right) in 1986) existed from about 1984 - 1992 and were one of those bands like Loop (See my Post HERE ) That only seemed to exist in the 80's! I always put Head Of David into the industrial category but tho they have some touches of what would later be termed Industrial they really aren't, they don't have that "machine" like stop and start and clinical coldness of industrial music, they had quite a unique sound it's hard to pigeonhole them so I'm not gonna try but they are pretty heavy with a seriously Gnarly growling bass sound Pounding drums and LOUD heavy kinda psychedlic guitars! Think Bikers, 60's road movies Black Leather and some slight S+M overtones and a general dark and grungy sound (grungy as in dirty/sludgy not the crap Seattle music) and you're about there! I've also heard them described as "A Protoypical Godflesh" which wouldn't be entirely unfair as they had Justin Broadrick as a drummer for a while and he formed Godflesh after his tenure with Head of David and i definitely think he took a huge influence from the guitar style/sound of H.O.D. with him! So in short think Godflesh but not as industrial and Loop but WAYYY heavier and more intense! Right if that hasn't confused the fuck out of you onto what i present here.....

Debut 12" "Dogbreath" from 1986 contains 4 tracks which opens with the utterly POUNDING "Smears" and continues to bust your head over 20 mins with 3 original tracks and closes with a slow grinding take on Suicide's "Rocket USA" (Also covered by Loop jeez guys Suicide had loads more good songs than just this one) This was later released as one half of 'LP' (and later 'CD') backed with their debut Peel session however i have given you "Dogbreath" On it's own and saved the Peel session for later (Keep reading...) This is taken from a 320kbps CD rip (but not mine)

Next up is debut album proper "Dustbowl" released in 1988 this album was the debut of Justin K Broadrick on drums recorded by Steve Albini and one of the albums that helped him make his name, This is a great album some of their best songs are on here and tracks like "Skin Drill" & "Peirced All Over" carry on from where "Dogbreath" left off but with a slightly cleaner production but not losing ANY of their menancing sound! In fact track by track this is just a great album there's absolutely no filler and is the sound of a band firing on all 6 cylinders and at their peak. The file is taken from a 192kbps rip possibly vinyl rip but it sounds pretty damn good to me even tho it has great Albini production it is a quiet recording, the quality is there you just need to turn it up!

Just after "Dustbowl" a 12" of alternate mixes of the album tracks was released  "The Saveana Mixes" This contains not vastly different versions of "Bugged" "108" & "Adrenicide" from the album and one cut not featured on the album "Bad Times" as i said not vastly different from the album versions but with maybe a slightly more dubbed out production giving the songs a bit of a different feel and a bit more space than Albini's tight production style, even tho 3 out of the 4 tracks are repeats of album tracks it's most definitley worth hearing this. This was only released on vinyl so this is taken from a vinyl rip but again quality is fine!

Saving, in my opinion the best till last you get "White Elephant" This was released as a limited vinyl/mail order only release rounding up the other 2 Peel sessions they did (The first one having been previously released as one half of 'LP'/'CD' as i mentioned above) however i felt all 3 peel sessions should be heard together in their correct running order so Instead of the original 2 Session version this is my personal "Dave's Expanded Version" so it is now a complete Peel sessions (Note I have since been informed of the fact that they did one further peel session after these 3 however that is during the time they were on their last legs as a band and in my opinion not very good) featuring their 2 sessions from April and September 1986 and their 3rd and last from just before the "Dustbowl" album in July 1987 which debuts 4 tracks from the forthcoming album. I think this works better as a complete set of the 3 sessions chronologically and re-tagged with all the info so it runs smooth and won't confuse your media player. 6 of the 7 songs from the first 2 sessions were only recorded on these sessions and never re-recorded anywhere else. The second session however is the one that fucking floors me completely Opening with the super fucking heavy "Jack Nicholson" which is lyrically a tribute to "The Shining" and totally manages to evoke the feel of the movie i.e. dark and menancing! You then get a Peel version of "Pierced All Over" which has the same heavy sound and is far superior to the later recorded album version and closing with the slow burning crawl of  "Metal Texas Psych-Out" these 3 tracks are the BEST of Head of David in my opinion and definitely my favourite of their recordings! If you are unfamiliar with Head Of David I suggest you start with this album it's a perfect representation of their sound and contains great (if not better) versions of tracks later recorded for "Dustbowl" and as i said what i consider to be their best work.

So There ya go this is not a "Discography" as such because I have ommited "official" bootleg "H.O.D.I.C.A."  which is supposed to be them live at the I.C.A. in London but this album contains 1 side of them live which is a completely atrocious quality audience recording and  it's just one big mush through which almost no "songs" are discernible at all and the flip side of the album contains a whole side of a recording of one of those "Laughing Bags" you used to get in joke shops in the 70's & 80's where you press it and the bag does this insane tinny clown laugh. Why they bothered making this is a mystery to me because it's an utter waste of time I bought it at the time thinking I'd scored a winner only to be really dissapointed, if it's a joke I don't get it and it was an expensive joke on me at the time! Also missing is their later album from 1992 "Seed State" and it's single "Soul Spark" reason being that by this time there was nothing left of the amazing sound they had been doing up till then in fact it's so terrible i don't even have a download of it. What I'm basically saying this is all The Head Of David that is worth listening to and you can definitely bank on that! Go check out this utterly amazing, Influential, unique and totally overlooked band... Amazing!