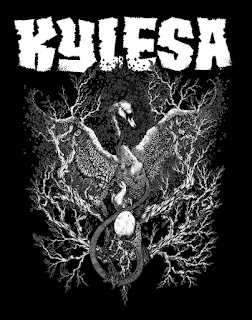 So i really wanted to do a Kylesa post as i'd already covered Damad & Karst (HERE) and seeing as how they are one of my favourite "heavy" bands and being the OCD freak that i am i almost uploaded everything but seeing as how i'm trying to give you things that are a bit rarer and i didn't want to be one of a million links to the same Kylesa albums and didn't want to get in trouble for upping "in print" material plus they're quite popular these days so.... here's my Kylesa post!

Right I'm sure i shouldn't have to explain but they were a super heavy band emerged out of the ashes of Damad and from the "Crust" political punk scene to develop a style all their own progressing with each album into the post metal popular monster they are today! That's all you're getting if you don't know Kylesa then i'd be surprised that you're reading this blog! so here's your files

EP & COMP TRACKS does what it sez on the tin wraps all the non album bits and bobs that weren't covered by Kylesa's recent excellent archive trawler "From The Vaults Vol 1" so you can be sure as shit most of this is set to make Vol 2 anyway! so far they remain non album bonus stuff!!! included in the file are.... Debut 7" on Scorched earth policy ("Delusions On Fire"/"Crutches") 110 Degree Heat Index 7" The Sides of their split 7"'s With Momento Mori & Victims and also their tracks from the Syd Barret tribute, The EYEHATEGOD tribute and a pink floyd cover from "Falling Down" Compilation. (Taken mostly from my own CD's and paid downloads all top quality)

Kylesa debut self titled album this is some seriously heavy shit and barely shows a picture of the band they would become later this is thick heavy as shit stuff with more in common with hardcore albeit with crushing mettalic riffage! This is pretty much out of print unless you wanna pay a lot for it or order it direct from Prank records then you can be happy that i have uploaded you a 320kbps rip of it here for you!

Split CD W/ Cream Abdul Babar  This is where the wisescreen sound of Kylesa first began to appear, on this their side of this split we have "Curse Of Lost Days" 1  track split into 5 movements this is awesome stuff a far more considered band but still with that heavy bludgeon to hand although this definitely sees them experimenting more with their riffage and also using more prevelant keyboards and noise to link up the tracks I think this is a vastly overlooked piece of Kylesa's music and is one of my favourite recordings of theirs criminal that it's out of print tho fairly easy to get a hold of on ebay or such! again uploaded from my CD at 320kbps.

That's it there's your Kylesa post hope you enjoy exploring the roots of this amazing band or refreshing you're tired old 192kbps downloads with my superior ones :-)

Kylesa - Mediafire
Posted by Dave Ballantyne at Wednesday, May 08, 2013