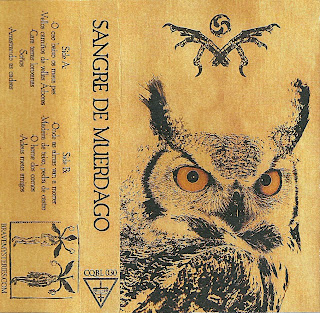 I originally posted this back in Febuary when I did my spate of "And Now For Something Completely Different..." Posts but decided it needed re-visiting here's why....

When i first got a hold of a download of their debut cassette it was from "No Beast So Fierce NYC" Blog and i posted their link but yesterday i found it to be a dead link so decided to re-up it myself, whilst doing this i decided to do a bit of surfing and find out something more about them. Originally what I knew was that this project was started by 2 members of Spanish crust band Ekkaia namely Pablo C. and Jorge Olson De Abreu sadly Jorge passed away right before the release of the cassette so I assumed that would be the last i heard of them... however today i found out that the project continues as i came across their bandcamp page and they have a new album available for download (HERE) and it is coming out in an edition of 350 CD's and an unspecified amount of vinyls. I was more than pleased to find this out as the download of the cassette pictured above has been a firm favourite of mine since I first heard it. I originally downloaded it cos i thought the cover was cool (I like owls!) and the description of the music sounded interesting. I was not prepared for what i heard in the slightest, this is some of the most truly emotive and beautiful music i have ever heard and NOTHING like anything else I own.
Mostly played on Spanish guitar with a minimal accompaniment of traditional instruments, some strings and occasional female vocals along with the male vocals (there is nothing electric on their music at all) This has a sound that is at once specific to their geography and traditional whilst at the same time having a completely contemporary feel. Unfortunately i don't know Spanish and because it's downloaded i don't know if translations are even available but the lyrics are sung beautifully and passionately which makes me feel the subject matter must be something really close to their hearts, The vocals are in a traditional yet contemporary style, what i'm getting at is that although the music is clear and well produced it could have just as easy been recorded in a cabin on a Spanish hillside 100 years ago or recorded in a studio 5 years ago. I lack the descriptive terms for music this good and this beautiful, I have very wide ranging tastes in music but I could not understand how music as well played and as good as this could not affect anyone with a beating heart no matter what your personal tastes in music are.

So onto your links I've been a bit bad here i managed to find a download of their latest album free (they charge 7 Euros for a download of the new album which is about £6/$9 which i don't have at the mo) so I'm giving you that plus the 2009 self titled cassette and their 3 track demo from 2007. Even though their new album "Deixademe Morrer no Bosque" is short of one member from the original duo none of the passion or beauty of the music has been lost and it  is equal in quality of musicianship and songwriting to the cassette and I've only listened to it now whilst doing this post.

Now the bitrates for these files is quite low (192kbps for the tape 128kbps for the new album and various for the demo) however due to the fact that it's acoustic music the quality is absolutely great I've listened to all of it whilst doing this and it's all crystal clear. I don't normally put things up with bitrates as low as this but I feel that with the new album being limited to 350 copies that more than 350 people have to hear this music! So i strongly encourage you to go buy a download of this album instead of taking it from here free but I promised to only provide free music on this blog so i leave it up to your own conscience what you do, but I've already enquired about buying this on CD if it's too expensive I'll be buying a download of it as soon as possible as i feel this artist really deserves my support i just couldn't wait till i had some free cash to hear the album,also note when i do get a CD or a higher bitrate download i will NOT be updating the link if you're fussy like me about bitrates then you should go support them at the link i put up at the beginning.

Please swallow your musical pride and give this music a listen if you don't like it you've lost nothing and if you do you will have discovered something very obscure and one of those very rare musical things that come along in life that affect you profoundly. An utterly astounding band.

*NOTE* I have since been contacted by Pablo from S.D.M. about this post he was kind enough to allow me to keep these links up here and not make me take them down, but he also informed me that Jorge passed away before the recording of the cassette and only appeared on the 2007 demo, the information i had from the place i originally got the SDM cassette download from was wrong so i just wanted to mention this as it makes more sense of why there's no less quality of music displayed on the latest album. Thanks Pablo!
Posted by Dave Ballantyne at Thursday, May 02, 2013