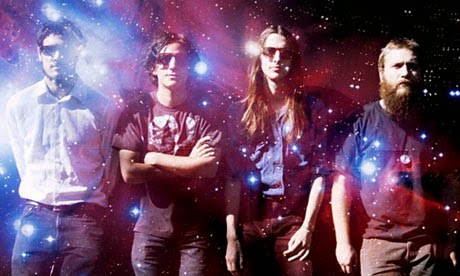 So this is kind of a sister post to the one I did on Dead Skeletons (HERE) I mentioned the band who played with Dead Skeletons when i saw them and this band were Föllakzoid and just to be clear I was at that gig for BOTH bands it was definitely a double header for me more than a case of support and main act! Hailing from Chile of all places it's not the place that automatically comes to mind when thinking about psychedelic music but hey I have been proved wrong here.

Föllakzoid are a great band I have heard them described as Krautrock which is a pretty fair point as while these guys do break out in plenty of bursts of psychedelic guitar the body of their sound does most definitely follow the precision metronomic approach of bands like Faust,Can and Ash Ra Tempel and more than a nod to Hawkwind! However with song titles like "Arabic Hash" and "Pulsar" you definitely know where these guys are coming from! Obviously talented musicians these guys really have a fantastic sense of rhythm and dynamics allowing the songs the pace and space they need to develop and build but at the same time even over their longer pieces they keep your attention from the beginning.What I like about this band a lot is they gently lull you along through a song but the builds are so subtle than when they do reach a crescendo it's such a great payoff but never breaks out into sheer guitar noise freak out territory even the peaks of their songs are measured and considered which definitely prevents it from becoming jarring when they do peak which can be a bit of a tool that many bands rely on.

So not the most prolific band but i can see why as their music is obviously very carefully constructed and well played so better in this case that it's quality this high than quantity! So there are 2 albums "Föllakzoid" , "II" and 2 EP's "EP" & "II RMX" EP the remix EP has 2 songs from their 2nd album remixed by psychedelic powerhouses Moon Duo and Psychic Ills and that's all there is. So I'm not gonna break down each release individually as my description above pretty much covers their sound which is consistent throughout all their releases.

So below you will find links to their entire discography so far check these guys out as they are definitely deserving of your attention because as you know with this blog i don't do half arsed posts on mediocre bands! Definitely a good listen for one of those lazy Sundays in the garden but far from mere background chill out music you can ignore! Their great rhythms and fantastic builds will have you instantly hooked!