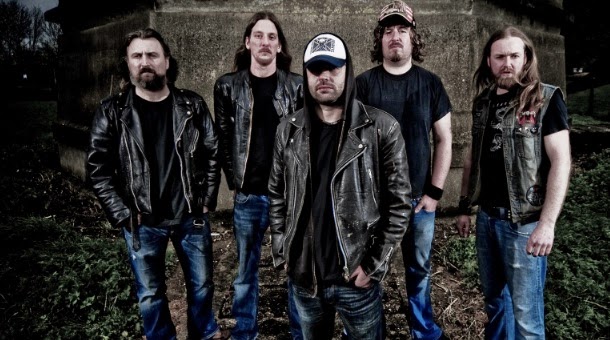 Viking Skull are a band I like a lot apart from the fact that they are called Viking Skull which is enough to endear them to me greatly they also play some seriously down and dirty Rock/Metal that just kicks my arse!

Viking Skull were formed during the period between Raging Speedhorn's 2nd and 3rd album and originally featured no less that 3 members of RS however internet info is sparse but as far as i can tell there are no longer any members of RS in the band and Gordon Morrison has been replaced on drums by none other than Bam Margera brother of Jess and also of CKY fame but don't let that put you off!

Over the course of an EP 4 albums and a compilation these guys have played some GREAT metal music! They're dirty fucking nasty take on it is nothing less than addictive and with Titles like "Beer Drugs & Bitches" and "You Look Like I Need A Beer" i think they do not take the misogynist nature of the music they are influenced by with any kind of real seriousness and tongues are most definitely planted in cheeks here! This is 100% horns throwin, headbanging, whiskey drinking rock 'n' roll of the highest order and is also great fun. I'm not going to go into a big thing here about it but if you are a fan of bands like Nashville Pussy, Lecherous Gaze (see my post HERE ) , or the post i did on Burning Leather & Ripper (HERE) or any of the "Brit Metal" posts i did then this is definitely for you.

I really do love my metal music but the histrionics and general posturing of the majority of the bands who take the whole rock/metal thing seriously just leaves me cold but when bands take the right influences from the best of the old bands that I like (think Sabbath, Thin Lizzy, Motorhead etc etc) and that have and do make the best kind of metal without taking all the bullshit that goes with that music seriously then I'm all for it and Viking Skull definitely fall into that category! Distorted, loud, gravel throated, rocking, brilliance!

Just a quick note below you will find a complete discography of Viking Skull however "Heavy Metal Thunder" was a compilation of the "Chapter One" EP , plus the bonus CD that came with "Chapter Two" that was also known as "Blackened Sunrise" EP plus a couple of unreleased tracks, I have edited it down to the "Blackened..." EP and the bonus tracks, as i have given you "Chapter One" EP seperately ok?

Cursed By The Sword - Mediafire
Posted by Dave Ballantyne at Saturday, June 07, 2014