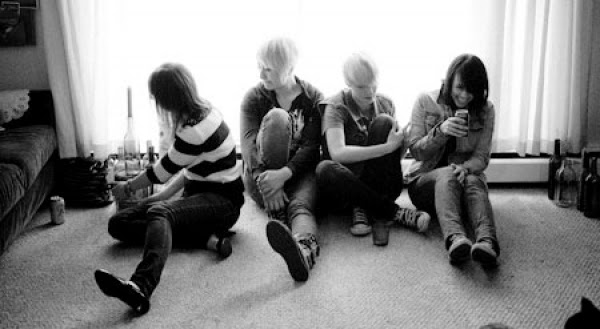 I'm not a big fan of the word "Punk" it has been used to describe everything from 60's garage rock and psychedelia to beer swilling boot boys with right wing tendencies add that to the fact that some of the weakest wishy washy guitar pop of recent years (Think Epitaph  records, Blink 182, Sum 41) music that has no fucking relation to punk also masquerades under that banner. So I choose my words carefully when using "Punk" to describe Canada's White Lung.

Debuting in 2007 with their "Local Garbage" EP on tiny Canadian label Hockey Dad records the strength of this EP caught the attention of premier league Canadian hardcore label Deranged records which would be their home until 2012.

White Lung are a ferocious listen I said at the beginning I hesitate to call these guys punk but whilst this band have no shortage of intensity or aggression i feel that their highly original sound is just falling short of what you might call hardcore but not by much! this 3/4 female band (the Guitarist being the only male) make one hellavu racket! Their music reminds me of some of the early American female fronted proto-hardcore bands like say Avengers or X mixed with some touches of the more underground end of Indie/Alternative take that turn it up to 11 and add a female vocalist with some fire in her belly and you have White Lung. The thing I like about these guys as well is they have an original sound and they play that sound LOUD and HARD the guitars are right in your face with slashing and cutting riffs and whilst there is some hints of melody there it's not at all what you would call "melodic" but it certainly is memorable!

I have done this post once before if memory serves however they have had a few new releases under their belt since then and a brand new album that only came out 4 days ago (June 16th 2014) plus they are such a great band they deserved a repost! So your links the entire 3 album and 6 x 7" singles amount to a mere 96 minutes so i haven't broken down the individual singles into links i have put them together in a pack so your first link "White Lung Ep's" contains the "Local Garbage" 7" , "Magazines" 7" , "Atlanta" 7" , their split 7" With Nu Sensae the 2 track "White Lung" 7" and "Songs Of The South" 7" which amounts to 14 tracks which is pretty much an albums worth of material recorded between 2007 & 2013 The you have debut album "It's The Evil" from 2010 2nd album "Sorry" from 2012 and their latest "Deep Fantasy" from this year. All tagged with the relevant artwork etc.

All of this bands releases are great and even though they have been going 7 years and are now signed to huge indie label Domino records you'd think maybe their sound would have softened a little? perhaps been smoothed out some for a bigger audience? definitely NOT! whilst there has been some musical progression and better production over the course of their career so far the best thing about this band is they never change their fundamental sound whilst their latest album may have a better production than say their debut they have lost none of the fire, aggression and intensity that make them what they are and there are not many bands that can say that after a 7 year career and 3 albums! One of the best bands I have heard playing good and loud punk fucking rock! Go check them out I guarantee you will be feeling like wrecking your house after one song! Enjoy!

It's The Evil - Mediafire