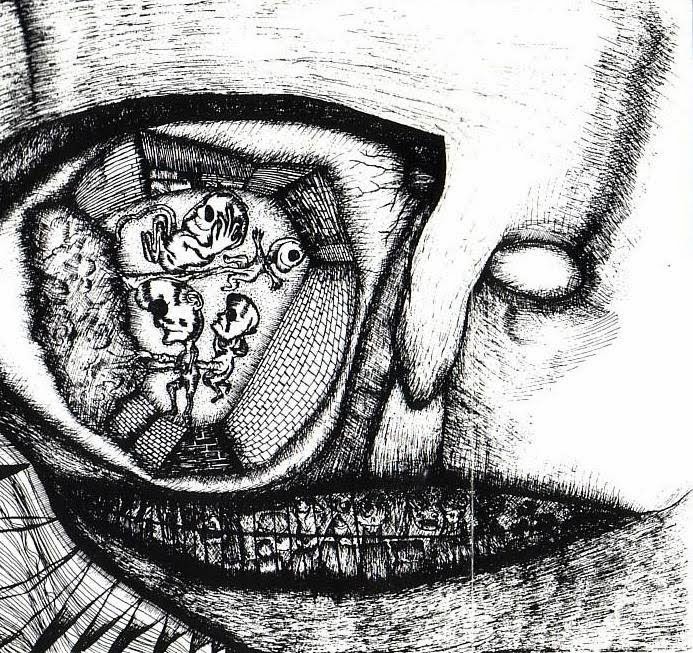 It goes without saying that Rudimentary Peni were one of the most important and unique bands to emerge from the Anarcho punk scene of the early 80's though they are loved by crusties and punks I feel that calling them anarcho is selling these guys short sure they may have had some "protest" type lyrics specifically over their 1st 2 EP's and the Death Church album but they always had a very different approach both musically and lyrically to the bands they were linked with even tho their music may bear some resemblance to some of that scene when you hear Rudimentary Peni you can be in no doubt who it is you are listening to!

I already did this post once before so I'm gonna try not to go on too much here however i said that about the recent Entombed post and look what happened there!!! Anyway as i said RP have a unique sound there's great loud bubbling bass topped with Nick Blinko's Scratchy high speed thrashing guitar lines and screaming vocals underpinned with some great drumming holding this insane mess together! Although there's no doubt that their self released 1st EP, Farce EP and "Death Church" album are all classics of the anarcho/punk genre RP have always been out there on their own and this is something that would come to the fore over their next 2 albums. Having been on hiatus due to various reasons of ill health etc there was a 4 year gap between the first RP album and 1987's "Cacophony" and it's here where the band start to develop even more unique sounds and ideas whilst "Cacophony" it can't be denied is still based on a punk framework there's far more than simple punk going on here this is an album chock full of crazy ideas lurching shifts in tempo and all manner of craziness! After the early material i found it quite hard to get into this album as for the time it was released you had the development of hardcore and grind in the UK just taking off along with the soon to be huge death metal scene bubbling under however RP's uniqueness is what makes them a great band and whilst the contributions of the rhythm section can't be denied it's the insane genius of Nick Blinko's lyrical themes and music that really sets this band apart from anything like anything you have ever heard! "Cacophony" is a great album all it takes is an open mind and a little perseverance and you will see that whilst maybe not the logical successor to "Death Church" it is equally as good! 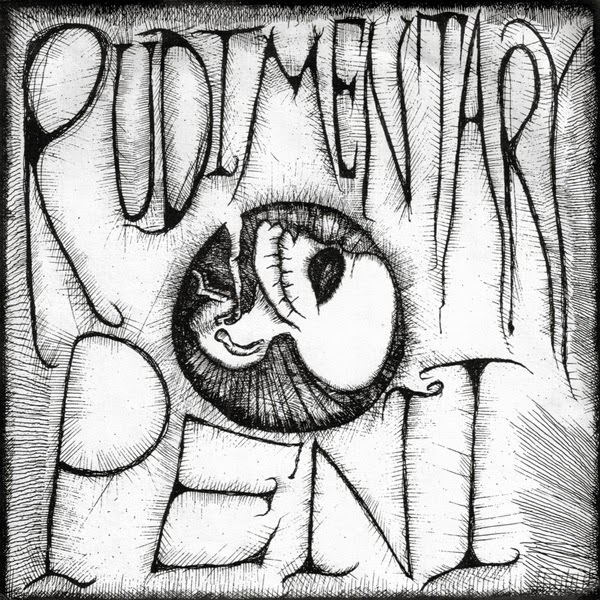 It was a further 8 years before RP would be heard from again and in 1995 they released 3rd album "Pope Adrian 37th Psychristiatric" And whilst some of the experimental and out there touches from "Cacophony" have been retained this album for my tastes is just too out there disjointed and mad to me it has the sound of a band making it up as they go along there's no decent structure to the majority of this album the band just stopping and starting where they feel like and also usually RP songs in the majority are short, the songs on this album are all a rambling 3-4 mins in length, add to this the fact that the WHOLE album and i do mean all of it has a backing track of someone babbling, this can be heard during the breaks between songs during the songs themselves and is especially felt during any parts of the songs where the drums drop out and to be honest after a couple of songs it just drives me nuts! This is the only RP album i don't own and to be honest I may have a cheek writing it up because i have never got further than 2 or 3 songs I know people who consider this to be as essential a part of RP's discography as any other personally i find it annoying, frustrating and basically a terrible album and only include it here for completion and for the curious among you.

SO that covers the early years! Whilst you couldn't exactly call RP "prolific" between 1997 and 2008 they released 4 EP's they are one of those bands that would return with every so often over that 11 year period with a new EP and every time it was always something to get excited about! I was quite lucky to have a good friend who worked at Southern records the label that press and release all of RP's material and he would always keep me informed whenever there was new RP in the works! I don't want to go into it too much here because after the atrocious "Pope Adrian" album i lost interest in RP big time! However when the first of these 4 Ep's 1997's "Echoes Of Anguish" came out my friend at southern sent me a tape of it and i was shocked to find that it was a stunning return to form for this band and every bit as good as anything else they had done and to be honest there is little point in breaking each EP down too much because from "Echoes...." up to most recent EP "No More Pain" RP have been consistently brilliant and apart from maybe slight variations in sound and production each EP has been the equal if not the better of it predecessor so if you like RP these 4 Ep's are as essential as the 1981 - 1987 material and get multiple rotation round here!

So to round up the story we have something of a rarity in 2009 Nick Blinko released a very limited book/art package called "The Haunted Head" (a more appropriate title for something written by this man there could not be!!!) enclosed with this book was a 1 track CD the only new material since the "No More Pain" EP this was a RP working of Wilfred Owen's "The Chances" (if you don't know who Wilfred Owen was then get Google-ing!) it's a great song but as I don't own the book or the CD as the CD without the book sells used for about £40 and with the book from £250 - £350!!!! however some kind soul put the song on youtube and i ripped the MP3 from there! It's not the most essential RP song but needs to be here for completions sake!

So to finish up there's a couple of extra bits for you firstly we have the Rudimentary Peni Live EP which is a brilliantly packaged and well put together bootleg 11 track EP culled from live material from 1982 shows I don't know if the material is taken from different shows or a whole show as RP shows were rare and short however it's a decent quality live record and worth it for a rare glimpse of this band live. And lastly, in 1979 preceding Rudimentary Peni Nick Blinko was in a "band" of sorts called The Magits they released 1 very short 4 track EP (it clocks in at 3 mins in length!) called "Fully Coherent" and basically consists of English accented vocals backed by minimal keyboards and keyboard stabs for rhythm this EP is weird and strange and is included here simply because it's extremely rare and hard to find and is a strange listen also because you may be curious what Nick Blinko was up to before he started RP!

So there you go the complete works of Rudimentary Peni, Whilst i have mentioned Nick Blinko several times here Rudimentary Peni wouldn't be the band they are without the stellar work of Grant Matthews Bass and Jon Greville's Drumming the 3 members are lifelong friends and have been involved in everything the band have released however it's the lyrical, artistic and Musical vision of Nick Blinko that plays the main part in making this band so unique, I strongly suggest you do a google image search on Nick Blinko's art and marvel at the intricacies and insanity of his work (all pics with this post are Nick's art) as getting the music and front cover of these releases here might be great the artwork is as essential a part of the whole package. Also i would also seek out Nick Blinko's book "The Primal Screamer" it has recently been reprinted by Pm Press (direct link to the book on their site  HERE ) it is available through pretty much every online book seller from amazon to barnes and noble, It's a fascinating, scary and atmospheric read and is also a semi fictional autobiography of Nicks early years and also looks upon the formation of Rudimentary Peni and the early anarcho punk scene they were involved in.

If you have not heard Rudimentary Peni before and you come across this post the links below are in chronological order i suggest you start with any of the first 3 links and if you like them come back for more,This band are a truly unique one in every way and i hope you can love them as much as i do! Enjoy! 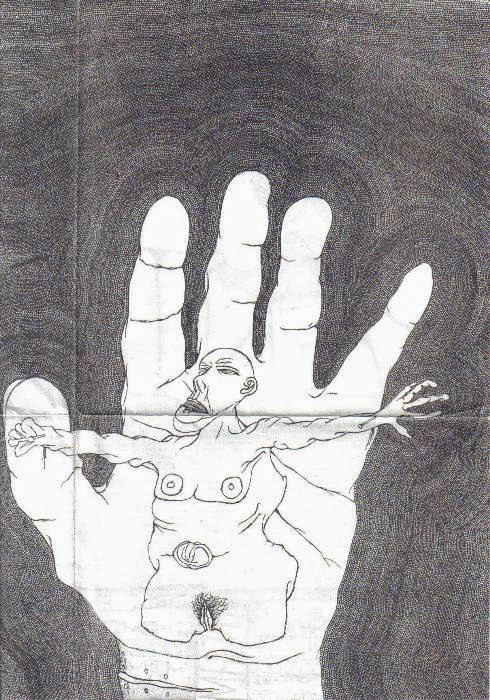 One Final note the majority of Rudimentary Peni's back catlog has and is being reissued at the moment all my rips are taken from my original versions of the CD's however should you wish to seek their records & CD's out now you will probably find it a lot easier than i did! Check those reissues out at Southern HERE
Posted by Dave Ballantyne at Thursday, June 12, 2014