THIS HEAT - OUT OF COLD STORAGE 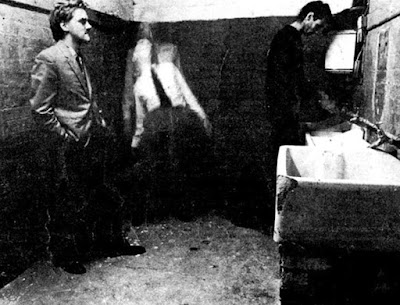 This Heat are a band I had never heard of till a couple of years ago I was going to a sorta indoor festival because SWANS were headlining and on the bill were a band called This Is Not This Heat my partner who has some far more obscure tastes than me seemed to be quite excited about this and was mentioning Charles Hayward often. Me? I was clueless! So turns out This Is Not This Heat were a version of This Heat featuring original and founder member Charles Hayward, it was a great performance and I enjoyed it thoroughly and had my partner school me up on this band I had never heard of. FFWD a few months and my partner is telling me that she can't listen to This Heat on spotify and it's really pissing her off. I went on one of my geek hunts and found her the complete works boxset "Out of Cold Storage" and this brings us to this post! I think the issue with me was I knew the name but I had mistaken This Heat for someone else ,I thought they were one of those 80's synth pop bands I have no idea who I mistook them for but I'm glad that situation was rectified!

I can tell you now I love the music of this band but I know very little about them so I'm gonna hand this over to the internet (again!) and then take you through the links

"In 1976, Charles Hayward of Gong (and Phil Manzanera's Quiet Sun) joined with Charles Bullen and Gareth Williams to form This Heat. Though arising from art-rock and the British school of fusion jazz, This Heat quickly developed into an experimental band largely dependent on tape loops and production tricks. This Heat dissolved in 1982-1983. Charles Bullen went on to solo work and put together his own studio in the late 1980s; he has recently issued a CD under his own name. Charles Hayward decided to keep up public performances and formed The Camberwell Now.
This Heat were an English experimental rock band, formed in early 1976 in Camberwell, London by multi-instrumentalists Charles Bullen (guitar, clarinet, viola, vocals, tapes), Charles Hayward (drums, keyboards, vocals, tapes) and Gareth Williams (keyboard, guitar, bass, vocals, tapes).Originally active from 1976 until 1982, This Heat were active in the ascendancy of British punk rock and post-punk, but stood apart from those scenes due to an experimental, confrontational, and politically charged approach. This Heat's commercial success was limited, and their discography consisted of only two albums and an EP, but in later years the band have been widely considered a link between early 1970s music styles such as krautrock and later experimental genres such as industrial music and post-rock"

Ok their wikipedia page has far more information this is just a small paragraph to give you an idea.
So the boxset well This Heat were not hugely prolific they released 3 albums an EP a Live album and a disc of John Peel Sessions and that was all The reason the set is called "Out of Cold Storage" is that This Heat's place of practice was an old abattoir and they used to rehearse and work on music in a huge meat fridge, How this influenced their sound I guess we don't know!

Describing the music of This Heat is difficult there's no easy definition as This Heat were and still are out on their own musically and have an experimental sound that is challenging upon first listen Combining traditional instrumentation such as guitar bass and drums with tape loops and production technique they go from digestible tracks with a slightly experimental edge to challenging noisier pieces, from gentle vocals to tortured angst. There are elements of Krautrock, Post Punk, Jazz and an Industrial feel with some of the noise and effects they use but because these guys are such talented musicians and can really play it's all held together cohesively, particularly by the absolutely stellar drumming of Charles Hayward. It has a sound of the more experimental end of Post Rock music (Tortoise for example) but predates this genre by a good 25 years!

I am hoping that as This Heat are unavailable to listen to outside of youtube or actually buying their CD's that this will be a godsend for the people who are curious as well as people who are already fans so failing to describe the band very well my suggestion is to start with the debut self titled album or the cleverly titled "Made Available" Peel Sessions album (clever pun huh seeing as Peel Sessions are for the most part recorded at the BBC's Maida Vale studios)  These are probably good entry points but really none of the albums are easy this is is the kind of music that takes investment to a degree repeated listens will unveil sounds and layers that will just leave you scratching your head in a positive sense!

Made Available - Both Peel Sessions from 1977

Deceit - Third and final album from 1981

Nivelles - This was a 1 track CD  given free to subscribers to the production of the box set unfortunately we came to it after the fact and did not receive this but this completes the discography and is 1 track recorded in 1981 possibly an outtake from "Deceit"? as it is only one track I have Bundled it with the "Health and Efficiency" EP

I apologise for my poor description of this band I'm not a journalist or particularly good at English (maybe because I'm Scottish? ha ha) when you have a band as complex and as talented as This Heat and some 40 + years ago were really pushing the envelope musically with a great deal of improvisation employed how the hell do you relate that in words? but if you find this post intriguing it would only take you a cpl minutes to go to youtube to have a listen or 5 mins to download an album from here? I often have found great things by taking a chance so I will leave that decision with you the reader!