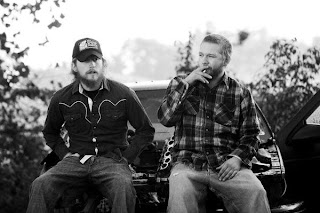 Left Lane Cruiser were a band I discovered when browsing Alive Records back catalogue (Alive records is the blues/garage/punk label of Patrick Carney Drummer of Blues rockers the Black Keys). Having discovered that a few great CD's we had here were on Alive records and doing a bit of trainspotting online I found many more great bands on the label, but for me Left Lane Cruiser are by far the best of them.

Comprising of a duo of Brenn Beck on Drums and percussive instruments and Fredrick "Joe" Evans IV on slide guitar and vocals, LLC originate from Fort Wayne, Indiana in the USA You'd be forgiven for thinking they were from the deep south of the USA and indeed they themselves say, they take their influence from "North Mississippi Hill Country Blues musicians most of which are signed to Fat Possum Records". Both their sound and lyrical subject matter is steeped in the traditions of the American South. with album titles like "Bring Yo' Ass To The Table" and songs like "Pork N' Beans" and "Hillgrass Bluebilly" they most definitely wear that influence on their sleeve.

Now there seems to have been a LOT of blues revivalism over the last decade or more in the wake of The White Stripes take on the blues, and also quite a few 2 piece bands as well, (love the White Stripes or hate em you can't deny they opened the door for a torrent of new modern electric blues bands that has seen a modern take on the style that is new and exciting, some 100 + years after it's invention. Also Seasick Steve's madcap home made instruments and quirky take on traditional blues deserves a mention for bringing blues back to the attention of the world in more recent years) but to my mind LLC are the best of them. Their blend of foot stomping electric blues with a very slight nod to heavier contemporary styles such as rock and garage and Fredrick Evans blistering slide guitar work and raspy vocals just nail it for me.

So there is not a lot much more that I can tell you about this great band so here I present you with their discography now before we start LLC tho steeped in blues tradition do have their heavier moments just listen to something like "Big Momma" from "Bring Yo' Ass.." or "Hard Working Man" from "All You Can Eat"  for examples of this this is blues but these guys are peddling a seriously rocking and ass kicking variation of this that is all their own.


I'm not gonna get into a big thing here about each album because tho they have progressed in musicianship, songwriting and production over the 7 or so years they have been around this is blues music, loud and electric and staggeringly good as it is it is still blues based so if you're a fan of any of the modern electric blues/garage bands like for example Black Keys, Radio Moscow, Oblivians etc then you NEED these albums if you don't like blues in any of it's many forms you would've stopped reading long ago.

Left Lane Cruiser were fairly consistent soundwise over their first 3 albums "Gettin' Down On It" , "Bring Yo Ass To The Table" and "All You Can Eat" although the production got better with each release as did their playing, the sound remained fairly similar throughout. Obviously though as with any band there is a marked progression in the quality of the musicianship with each release, if you listen to the first album then say the 3rd album you will see how much they had come on as a unit and as musicians tho talented as they were to begin with! However it's on most recent album "Junkyard Speedball" from 2011 where you can hear a real progression the production here is far cleaner than any of the preceding albums and Frederick Evans vocals while still retaining that rough blues howl have definitely gotten a little smoother here also the tightness and sheer talent of these guys is especially impressive here. This continues on 2012's collaboration with James Leg vocalist of fellow Alive records soul/blues band Black Diamond Heavies. On this album the rocking blues is given a further edge by James Leg's Tom Waits/Mark Lanegan gruff vocal style and the addition of some organ and blistering harmonica here and there and Leg adds a groove to the music that wasn't there with LLC's raging blues before and trust me it's utterly great.

UPDATE - In the 7 years since I posted this Left Lane Cruiser have DOUBLED their discography releasing a further 3 albums 2 Compilations and a split album! So as it's my intention to update any posts that are out of date I have added them below. It appears that Brenn Beck original drummer has quit the band sometime after "Rock Them Back To Hell"  I don't think you or I need to know why, I haven't researched it but he has been replaced by one Pete Dio I did look him up appears he has no history with any other bands, for 2016's Record Store Day  LLC released "Beck In Black" a remastered compilation of early LLC material with Beck drumming I checked the tracklist against the early albums and found no matches so it appears to be a collection of unreleased material (Link below) so it would seem to me that there is no acrimony over the split. So there's been no radical changes in direction here, however, first album with Dio drumming 2015's "Dirty Spliff Blues" while still a slab of dirty riffing seems to feel, to my ears, a little less ragged and a lot more tuneful than before this slight and it is SLIGHT cleaning up of their sound hasn't been detrimental at all I still find that their raw blues to be entertaining and still makes me want to stomp my foot, eat pork 'n' beans, wear dungarees and drink moonshine out of a jug!

So what's been added then well all the links are below but a couple need a bit of explaining. I already dealt with "Beck In Black" above there are 3 full new albums "Dirty Spliff Blues" (2015) , "Claw Machne Wizard" (2017 who's cover bears a striking resemblance to MC5's "Back In The USA" see pic below,whether intentional or not it wouldn't surprise me that this is part of where the non-blues influences lie) And "Shake And Bake" (2019) There is also a split with 20 Watt Tombstone "Death Blues V.s The Dirty Spliff" (2016) I have only given you the LLC side below and it's only 3 songs so more of an EP than an album. That brings us lastly to "Slingshot" This appears to be a remastered compilation of material recorded in 2005 preceding the debut album. 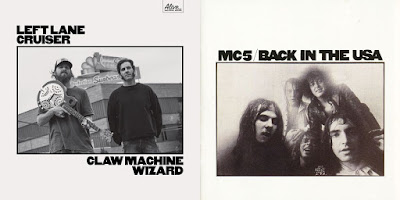 (hmmm seems plausible these guys have heard of MC5?)

So there you go some modern electric blues heavily updated  here that will have you don your check shirt and trucker cap pull the sofa out into the garden, fire up the BBQ and crack a beer whilst you involuntarily nod your head to the sheer brilliance of this really great band.

(Note - 2 of the links below are in blue simply cos for some reason I can't change them! They are still valid links and working)


Gettin' Down On It - Mediafire

Bring Yo' Ass To The Table - Mediafire

All You Can Eat - Mediafire

Rock them Back To Hell - Mediafire