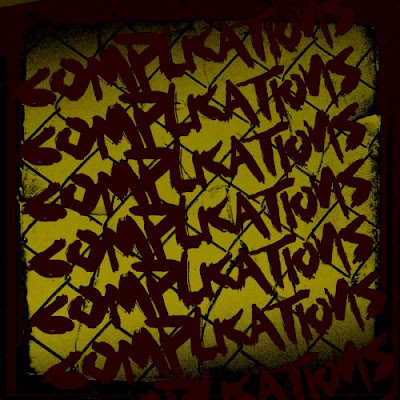 I have said often that I will be posting no more "extreme" music in this blog but I'm not "Stalinizing" my past as such, it's just I no longer need the glut of it I had..There are however a handful of bands that still mean a lot to me one such band was Canada's  Born Dead Icons (See Post HERE) Born Dead Icons seemed to simply fade away after their 3rd album and nothing more was heard of them, but a post happened to come up on my facebook about them and I said they were so great shame they never went on to do another band... I got a reply, seems most of the band went on to do this here band Complications. Now as I have linked you to a post about Born Dead Icons I won't go in depth here but I will say they were one of the more interesting bands from the crust punk explosion of the early millennium they were heavy and aggressive but they tempered that with melody and influences beyond the usual taking in early American hardcore amongst other things but with Complications they have taken things in a whole new direction. Firstly it has to be said the kinda raspy vocals from BDI have been retained but tempered to a more urgent style rather than the gruffness of BDI and the musicians involved in both bands are French Canadian so the vocals are very accented which I always loved with these guys in both bands! However it's the music here that is a big departure, what we get is a much cleaner and brighter sound it's no longer heavy and oppressive and is definitely leaning more heavily towards an influence from the more melodic end of US Hardcore, such as Wipers, Naked Raygun etc. There's also a little bit of post-punk in there too (think Killing Joke & Wire etc.) also what's really good is without being too fast these guys keep it uptempo and convey a more positive sound here than the doom - laden sound of their previous bands and is definitely, with the great driving drums, gonna get your foot tapping! . All in all it's really pleasing to my ears probably because it suits my current tastes better ha ha!!

When I first found out about this band from the previously mentioned post on facebook I went searching but for some reason these guys decided NOT to title their releases (a Cassette album a Vinyl LP and a 7" I have not put the 7" in this post as it's a terrible quality rip and both songs are on the other releases) they are all just self titled which made it damn hard to find them and google was useless, unless you want to know about pregnancy complications?!! Eventually I managed to source some fairly muddy rips of both these guys releases, a cassette album and a vinyl album, whilst it was great to have them I will be honest, I didn't listen much due to the quality of my files and these were what I originally uploaded to this post. The story does not end there though. I can't remember how I found out but these guys started a bandcamp page and not only did they offer both the Album and Cassette in direct, top 320 quality both the cassette and the LP had been expanded with bonus tracks from the sessions, 2 on the cassette file and 3 on the LP file. To top that they were also FREE downloads! When I got these I could not believe the difference in quality everything was much brighter and cleaner and I noticed even more so how much more melodic and, in a way, "accessible" these guys sound was.

So I decided to completely re-write this post and re-up the links which I have done, so, below I have linked you to both the Cassette and the LP uploaded to my mediafire to save you messing with bandcamp and even trying to search Complications which as i said above is a trial! I cannot urge you enough to download these as this is something new and fresh and basically why they survived the cull of noisy stuff because this is ridiculously good and really does deserve to be heard by more people.

P.S. I got a message not long after my original post saying that it's unlikely you'll hear much more from this band as apparently one of them is now a trucker/lorry driver and the other has a baby so this might be the last we hear of these guys but hope not They did put up an advertisment for a gig in 2015 so who knows?