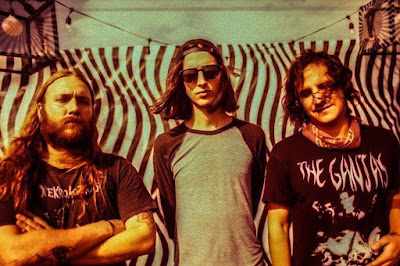 So in 2015 this was originally a kind of a "sister" post to the one I did on Dead Skeletons (HERE) I mentioned Follakzoid in the  Dead Skeletons post as being the "support" band when I saw both of them live, but just to be clear, I was at that gig for BOTH bands it was definitely a double header for me more than a case of support and main act! Hailing from Chile of all places it's not the place that automatically comes to mind when thinking about psychedelic music but hey we live in a linked up global culture now and I have been proved wrong here.

Follakzoid are a many faceted band, I have heard the tag of "Krautrock" being thrown at them often and to a point I agree, beyond the first album the backbone of their sound is a strong metronomic rhythm exactly the kind of thing that defined those early Berlin bands such as Can and Faust however whilst those bands employed a more minimal approach to a degree Follakzoid definitely are a far more psychedelic prospect at least they started out that way.

Folakzoid have not been the most prolific of bands having only released a mere 4 albums and 3 EP's up to 2019 which isn't a great deal over 11 years of existence but as I've often said and is the case here it is quality over quantity.Self titled debut album from 2009 is definitely the sound of a band finding their feet, though not without it's psychedelic edge the Krautrock influence isn't apparent here, what is is a sound more akin to guys who have been steeping themselves in the first 2 Stooges albums, Early Velvet Underground and sounds that remind me of UK 80's guitar bands like My Bloody Valentine and Loop.For example the track "El Humo" is a straight up homage to "I Wanna Be Your Dog" stopping just short of being a cover! It's an enjoyable listen but it is raw in both production and sound, and, if you were to listen to their back catlogue in order then this album would not in any way indicate where Follakzoid would go with their sound and for me is more like a demo for a band exploring their influences and learning their craft. 2 years later they had completely changed and it's their self titled 12"/EP that for me is the debut proper for these guys. This is where that metronomic beat and more minimal approach of Krautrock begins to show it's almost like they went away for 2 years steeped themselves in the early 70's Berlin scene and Hawkwind's back catalogue.

INTERLUDE - Now whilst many people may Baulk at the mention of Hawkwind and I may well be presuming prejudice here, but let me just state now, I'm a big fan, Hawkwind are for me one of the greatest and most important bands in music history, I know a lot of people are probably jaded by their space rock/Stonehenge/acid hippy reputation but they are by far and away one of the greatest psychedelic rock bands of all time, the only reason I haven't done an extensive post on them here is because their digital discography sits at a hefty 10 GB and I don't even have everything they have done, and, I'm not ruling out that it may happen in the future! So do yourself  a favour if you haven't or don't already,go listen to Hawkwind if you want some recommends on where to start,comment!)

Returning to Follakzoid's 1st EP, with 2 lengthy tracks this EP clocks in at just shy of 20 minutes and really is a good taster for the music to come from Follakzoid. The drum's tick away in the background while the music rises and falls but never rising to ridiculous levels of freakout they really have tempered their sound here with a strong sense of restraint. A motif that would continue to develop over the course of the next 3 albums. "II" their 2nd album is my personal favourite, here they have the minimal Krautrock restraint nailed but take it somewhere altogether more spacey! Whilst the rhythm section holds everything together perfectly, this leaves the guitar to explore more freeform textures and sounds whilst having an almost "jam" like feel to it, It's all locked together in perfect synchronicity by tight and extemely confident playing, the fact that these guys can play and play well as a unit is immediately apparent. Between "II" & "III" Follakzoid released "II Remix" EP This features remixes of "9" & "Trees" by modern psych titans Psychic Ills and Moon Duo respectively and whilst I'm not a fiend for remixes the chosen remixers were a stroke of genius and add their own fantastic touches to these 2 tracks without ruining them.So when I saw Follakzoid back in 2015 they had just released their 3rd album "III" with only 4 tracks and clocking in around the 45 minute mark Follakzoid here have taken their minimal aesthetic to what I thought was it's logical conclusion. While the plucked bass and tight metronomic rhythms still hold the bands sound together and the guitar still takes us out into space, this is not a "cosmic" space like before, this is space in the literal sense.Whilst there had always been an element of this previously here the music, while still being fantastic is far more stripped down than before, the drums have been reduced to an almost pulse beat of hi hat and bass with occasional cymbal punctuation to lift the songs dynamic when needed (I remember remarking when seeing them run through this material live that being Follakzoid's drummer must be a really boring job!!!) .It's exactly this ability to restrain and build songs that engage and have a great dynamic, but yet hewn from the sparsest of elements, that is key to this bands greatness. The effect of this pulsing beat and minimal elements gives this album a feel of being like one 45 minute track that morphs and changes over it's course as the musicians dictate.
This all made sound a bit boring, I can assure you it is not, the bass pulsates with, in places, an almost "funkiness" particularly apparent in the track "Earth" the drums continue to provide a solid beat whilst the guitars meander and build over the course of the songs making for an utterly spellbinding listen. In the interim between "III" and their next album, in 2017 Follaxoid had a session in a London studio to jam 2 of the tracks from "III" with none other than J. Spaceman (he of Spiritualized / Spacemen 3 fame) Whilst it's a great listen and I did notice that there were added elements to the songs and definitely louder peaks, I felt that with songs as minimal as these, there was not a great deal to jam out. Don't get me wrong it's a decent record but to me it doesn't feel enough has been done to radically change these songs to justify the release! I may be wrong but you can judge for yourself.

As I have been sat here this morning re-doing this post,I decided it was about time I actually owned this fantastic bands CD's. I remember seeing that they had released an album entitled "I" last year I saw this at the time and assumed it was a repackage/remaster of the first album (It's called "I" the preceding albums were called "II" & "III" what else WOULD you think?) But, as I was purchasing the other albums I had a look. The 4 tracks on this album at lengths of 17+ minutes confused me! the debut album had 6 average length tracks on it, NOPE turns out Follakzoid had had a new album out for 8 months and I had ignored it because they confusingly titled it "I" .I  have literally had it for less than an hour but as I was in full on blogging mode I have added it to this post to save me having to come back and edit  Please bear that in mind when reading on... Just when I thought no more could be stripped away to minimize Follakzoid's sound these guys bring out "I".Here the sound has gone even less, which I thought would have been impossible without reducing the music to beatless drone. but no these guys are certainly masters of understatement. There are 4 long tracks simply titled I - IV and opener "I" has a beat that I'm not entirely sure is a drummer,the hi hat is barely being touched and the bass drum is simply a pulsing vibration underpinning this, however still being referred to as "A band" by their label and there being no mention of anyone leaving then I can only assume there is still a drummer? There has been little progression this is simply because instead of adding more they have put in less, but yet still retaining the sound of predecessor "III. So without repeated listens (which I can tell you this album will get as I really like this band) I can't say much more than if you like "III" then you will like "I" all the elements are still there just presented in a more restrained and quiet fashion.

Right well I have waffled away here So I shall go now and hand this post over to you the listener. It's astounding for me how compelling that progressively more minimalist this band have become that I still find them engaging, when it comes to this sort of music I am generally more of a fan of the noisy freak out or 60's kitsch of psychedelia, but in this case these guys have melded the template of Krautrock to a spaced out groove that just manages to fill the room, albeit with a very deft and quiet manner. Below is their released discography to date I recommend starting with "II" and working your way forward. Enjoy.

I - Mediafire
Posted by Dave Ballantyne at Thursday, April 09, 2020