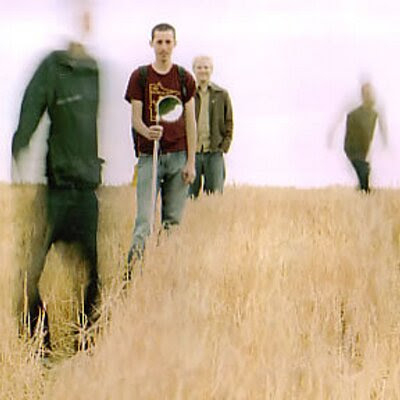 Hood are a band that can be a challenge but they certainly seem to endear themselves deeply to everyone who discovers them. I recently bought a Hood CD from discogs and received a message from the seller saying

That pretty much says it all there however it does beg the question why was he selling their CD? ha ha!

Hood hail from Leeds in the UK and existed from 1991 before going on Hiatus in 2006 and considering the hiatus has now almost reached the same length as their preceding career I am not holding my breath to see them return anytime soon! Hood are a band who's early work may confound the listener it can leave you scratching your head sometimes but it's intimacy pulls you in and completely hooks you! I can't even begin to describe the early music of Hood ,but I am going to try! They are kinda like the UK answer to Lou Barlow's Sebadoh but with more of a "band" feel as they are a band, but for example one minute you could be listening to something that sounds a bit like say Sonic Youth or the lighter end of Dinosaur Jr. before being plunged into a burst of static noise/radio tuning and found sounds then next you'll be listening to a home recorded acoustic number or a fragment of what sounds like a rehearsal recording! The other thing with Hood is, over their early work they are a bit like Minutemen, they sound nothing like them but their songs are short and compact, An EP may have as many songs as an album but be 1/4 of the length. One of their albums "Silent '88" has 26 songs! I may be making Hood sound like a confounded mess here but trust me all of it works together to create a sound that draws you in and keeps you interested.

If you are still reading after my ham-fisted descriptions above I shall continue. In 1998 Hood signed with Domino records and things began to change quite drastically. Firstly the production and sound was given a huge lift, Hood obviously being given better studios and better producers ,so shorn of their previous lo fi sounds and collages of noise Hood developed into a great post rock band, something akin to maybe Tortoise or other American contemporaries such as you'd find on the Thrill Jockey label. The louder guitar noise sound of the earlier work replaced with a warm gentle sound that loses none of the home recorded intimacy of their earlier work it just has a vastly improved sound. Also the songs now, were more conventional in length, rather than ranging from less than a minute to a couple of minutes at most, here, the songs are given more time to develop and are more consistent in sound. This does not mean Hood had stood still and churned out standards for the last 8 years of their career, third Domino album "Cold House" saw Hood collaborating with Why & Doseone of underground hip hop act cLOUDDEAD who were also making big waves with those in the know! Utilising sampled beats and the unusual vocal techniques of both Doseone and WHY? in tandem with their trademark sound to create something wholly different and by the time of 2004's "Outside Closer" the band were integrating brass sections and melodies that, for Hood at least were almost conventional!

I could go on but I think I've said enough for me this blog is about putting the choice in the hands of the listener the music is here free and it shouldn't take too long to download so if you like the sound of what I am saying go check out an album if not move along,

With a staggering 11 albums, 26 singles, 5 compilation albums and 151 appearances on compilations I cannot 100% guarantee this is a "FULL" discography hence the question marks after the post title, I don't think even Hood themselves could give a full accounting of all their work, but I thoroughly researched Hood as best I could when I discovered them, so if there's anything missing then I hold my hands up! I am not gonna get into full reviews of all your links either I'd be here all day but some of them will need some explanation but for the conventional albums I will leave you to do your own investigation or read my description above.

Right then your links.. Hood released a double album called "Singles Compiled" with such a huge EP discography this was a godsend at 59 tracks over 2 discs however upon investigation I discovered a few bits missing so I decided to go hunt them down and as Hood have some pretty weird and wonderful covers for their 7" singles, I decided instead of compiling I would break them down into their individual EP's so below you will find links to EP's #1 & EP's #2 these are pretty big packs containing 19 EP's over 2 Folders all separated, tagged and with their covers, however those are for the hardcore fan, I decided that, should you wish to have the more compact overview I have ALSO uploaded Singles Compiled which at 59 tracks, as I said, neatly compiled over 2 discs which contains most, but NOT all of the singles in the EP packs. The next one that needs explaining is  "Compilations, Tapes ,Disasters" OK so in this folder you will find  2 parts, this is basically my own home made thing I have taken the Hood Compilations "Structured Disasters" & "Compilations 1995 - 2002" plus some other non album bits and bobs and structured them into 2 x Hour long "parts" containing a total of 50 non album, compilation and unreleased tracks with custom covers created by me!

So that's that covered, the rest of your links are to the albums, there are a couple of things I want to mention. There is a link called "Field Report (a) (i) An Overcast Sky"this was a cassette only release, the discogs page on this release has 15 separate tracks listed (Go HERE if you want to see) but here the file is one continuous 27 min track and is basically a collage of ambient sound, practice fragments, pieces of songs, found sounds etc etc it's an experimental piece and I don't see the point in why they did it really but I include it here for the collectors. There is also a link below for "Noise, Warmth And Assuming Grace" this again was a cassette only release and was a split with Meredith, I have included the Hood side only. This is a bit more conventional than the Field report... cassette above, it is quite lo-fi but seems to contain less collaging and more straight forward songs and fragments, but they definitely sound like they are taken from jam snippets, practice tapes etc. Again one for the collectors. Lastly we have "The Hood Tapes" a collection of home recordings recorded between 2004 & 2005 and pressed on a CD-R, only sold on Hood's last tour, It was the last release by Hood and it's a pretty cool way to end being basically being a lot like their early work but a far higher quality in both songs and collages and sound.

That's it then folks here's a discography of a band I feel highly are highly overlooked and underrated. Their original lo-fi collage approach endeared me to them greatly, but I can see why it may have put off people who were more used to conventional music, however, why they didn't get more interest off the back of the lush albums of their Domino records era I have NO idea. This discography may be a little overwhelming but my suggestion is maybe pick a few bits, I would recommend  "Cabled Linear Traction" for a good overview of the early work and "Rustic Houses Forlorn Valleys" for a later view if you like either of those everything else is here. Enjoy!

THE CYCLE OF DAYS AND SEASONS - Mediafire