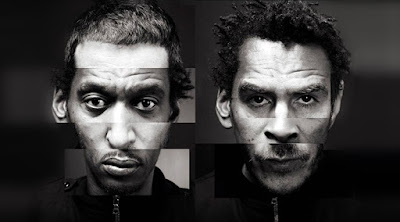 I have done previous posts on DJ Shadow (HERE) & Portishead (HERE) so I figured as Massive Attack are one of the big 3 originators of the sound known as "Trip Hop" and also happen to be one of my favourite artists that despite them being a mega band that it was long overdue that I did a post on them!

When it comes to bands that are popular on a global scale in the sense of "pop" popularity/chart sucess I don't like many, so, when people ask me why I love certain popular bands and artists who have had this kind of success  I have had the same mantra for decades and that is tis "Sometimes bands are popular because they are disposable and a current trend forced on you by the media sometimes bands are popular because they are simply REALLY fucking good" Massive Attack fall into the latter category.

A Little history, Massive Attack have worked hard for their popularity. Evolving out of a Bristol sound system collective named "The Wild Bunch" having immersed themselves in Hip Hop, Dub and Graffitiit culture they coalesced round a core of Robert "3d" Del Naja, Grant "Daddy G" Marshall And Originally Andy "Mushroom" Vowles in the early days they also enlisted Adrian "Tricky Kid" Thaw (Who would later see sucess in his own right as simply Tricky I will be doing a companion post on Tricky soon) This along with contributions from Shara Nelson & Horace Andy are the crew responsible for groundbreaking debut album "Blue Lines" in 1991, pulling together many elements of underground sound system culture they pretty much invented what would later be called "Trip Hop" (a name all the artists tagged with it despise) The Track "Unfinished Sympathy" was a massive hit both in clubs and in living rooms and thus Massive Attack became the hot name on everyone's lips! Massive Attack have continued to have sucess and adversity over the near 30 years since forming core members have come and gone at one point during the era of their "100th Window" album Massive Attack were Robert Del Naja On his own! Peaking with their "Mezannine" album selling 4 million copies in 1998 and containing a hit single " Teardrop" The story of Massive Attack is a long and convoluted one it's really difficult to discern who Massive Attack actually are at times core members as I said have come and gone and other names come and go regularly (Neil Davidge for example who appears to have worked on a lot of Massive Attack material but it's unclear what he actually does!) Massive Attack seemed to have settled nicely into a niche where they can comfortably do what they want, make music or not, it's been 4 years to date since they released any new music and there's no word of any coming I guess we'll know when they are ready!

I have called this post "A Connoisseurs Selection" this is meant in a slightly tongue in cheek way as there is no point in doing a Massive Attack Discography their music is distributed in huge quantities you can pick up all of their albums now for about £10 for the set so the reason for the name is I have picked a selection of newer things that might not be so easy to find and some bits that I have found that have never been given an official release. So here's what you get

First up we have something I came across by pure chance and had no idea existed. There is a fantastic Massive Attack site (you will find it here - massiveattack.ie) The person or persons who run this site are absolute Massive Attack obsessives there is so much information on there and so many bootlegs etc that you can download, they are all in FLAC and all of the highest quality, it's one of the first matches when you type in Massive Attack website to google and it's a testament to Massive Attack's spirit they haven't had their lawyers shut it down. I f you want to learn more about Massive Attack then I would strongly suggest you go there they leave no stone unturned. This brings us to our first 2 links I am an absolute FIEND for BBC recordings in particular Peel Sessions so when I found this BBC Live From Miada Vale Studios 2006  I was beyond excited to hear it what you get here is basically the Massive Attack live band playing live in the studio doing some of their best songs there are 7 tracks on this and it's a fantastic listen and the quality is superb I don't know how it was sourced but it sounds phenomenal! What's also great is, exclusive to this download (and from the website itself ) is that after the 7 tracks there's an interview with MA main man 3D .

Next up is "Nocturne Sessions (Disk 3)" Now do not panic this is not a random disc lifted from a set here's the story....

"This disc is one of the rarest Massive Attack promo discs in existence. There were only 200 copies produced and each is numbered. This disc was only given out free to the first 200 patrons of the Nocturne club in Bristol on the night of the 12th March 2002. It was the third in the series of such very limited releases from Nocturne to feature exclusive one track mixes from well-known DJ's and musicians from Bristol. This particular one was mixed by 3D"

So as you can see it's a series by different DJ's this being the 3rd and the only one related to Massive Attack! It's an absolutely fantastic mix, as it's a continuous DJ mix it is only one file however there is also a text document giving you the tracklist but just in case wherever you are in the world you can't open it here' it is,

For me this mix perfectly illustrates the diversity of influence on Massive Attack and why their sound is so unique and compelling!

Let's continue with the commercially available stuff. Firstly we have the "Blue Lines" (2012 Mix/Master) Basically in 2012 the band decided their debut album needed an overhaul for the new millenium being some 20 years old for this reissue it received a new mix and a new mastering job straight from the original tapes, whilst nothing has been changed drastically the sound is sharp and clean and everything just sparkles with a new energy, listening to this 2012 mix is a bit like washing your car, you knew you loved your car but it looked grubby and you didn't love it as much, then you put it through the car wash and it came out looking beautiful and you remembered how much you loved your car in the first place! It sounds great and include it here in case you are not like me and feel the need to purchase every scrap of Massive Attack.

Next up "Mezzanine" 2019 Deluxe Edition" I didn't even know this was coming out I just happened to be on an assignment in the community and the person I was with wanted to go into HMV so as we walked in "Mezzanine" was playing which brought a smile to my face however I did wonder why HMV would be playing it as they only ever play things they are trying to sell, new releases etc. So lo and behold I discovered this new overhaul of "Mezzanine" I personally think the album already sounded perfect but there's no harm in giving it a little clean up and it does sound fantastic however. the bonus disc is a full set of Mad Professor mixes of tracks from "Mezzanine" however, of the 8 mixes presented, most have already been released as B-sides to the many singles from "Mezzanine". There are a couple of new ones and I get the concept of the Album/Dub Version but I would have liked to have seen Mad Professor do an entire new Re-Dub of the whole album but hey what do I know?

Singles 2016 right well this is the absolute bonus for me, After a few years of silence in the time after their "Heligoland" album, in 2016 Massive Attack released 2 x 12" singles and a four track EP put together they total 8 tracks and pretty much an albums worth of material! Best part is this is a massive return to form for Massive Attack the sounds are fresh and contemporary but it still manages to sound like Massive Attack from the 90's it also features a host of collaborators both old and new including Ghostpoet, Hope Sandoval (Mazzy Star), Roots Manuva, Young Fathers and the biggest surprise of all Tricky See Post HERE) is back providing some vocals on "Take It There"  There is the 4 Track "Ritual Spirit" EP The 2 Track "The Spoils" 12" and lastly "Dear Friend" A couple of notes here, in the files you will find "Dear Friend is 2 tracks with the same name they both feature the same vocal but the second track is actually the instrumental of  "Take It There" from the Ritual Spirit EP. also note in the middle of "Come Near Me" the song stops and I think it is supposed be the sound of a party where "Unfinished Sympathy" is playing I found this a bit confusing but it appears to be intentional. These are a fantastic set of tracks and certainly have been enough to keep me going for the last 4 years waiting on a new Massive Attack Album.

OK so onto your last link Rarities so this is a bit of a misnomer as most of this is easily available however what I have done here is, I have taken the bonus disc of the Massive Attack Best Of "Collected" which features 10 tracks of rarities and I have tacked on some hard to find extras, so aside from the 10 original tracks I have expanded it with another 10 B-sides etc so here's what's extra...

The Hunter Gets Captured By The Game (From the Batman forever Soundtrack featuring Tracey Thorn of Everything But The Girl), Nature Of Threat (an MP3 Released by Massive Attack themselves from their aborted 2000 studio session for their 4th album),  I Against I (Instrumental) from a promo 12",  United Snakes (B-Side of Promo 12"/CD of  False Flags (UNKLE Remixes). Reflection B-side extra from "Inertia Creeps" CDEP, Aftersun (Feat Dot Alison) appears over the end credits of the movie Danny The Dog/Unleashed but was never put on the soundtrack released as an MP3 by the band. Superpredators & Euro Zero Zero  (Mezzanine singles B-Sides), Home Of The Whale (Mix of Hymn Of The Big Wheel from the B-side of their Debut EP), Unfinished Sympathy (Instrumental) Self explanatory!!!  That brings the Rarities file up to a meaty 20 tracks of non album Massive Attack!

So That's about it, I have made the write up and explanations far longer than I intended to making this a pretty massive (pardon the pun) post, but these guys are worth the effort. I was unsure as to whether to do this post or not due to the fact that there's not a great deal of  hard to find stuff by Massive Attack and in general for a band entering their 30th year there's not a great deal of material in general. As I said in the beginning this is A Connoisseurs Selection I'd like to think that there are people who like Massive Attack as a chart/pop/singles/best of band and there is a smaller group who love massive Attack for the innovative fantastic music they make, I fall in to that latter group, and if you do then this post is for you! If you're looking for hits and best of's go to amazon and buy a CD! I hope you guys enjoy this post as much as i enjoyed listening to the music and writing it up!