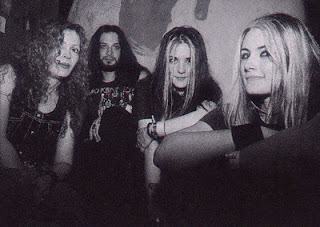 So to any fans of heavier music I'm probably preaching to the converted here but anyway 13 were what is commonly known as a "Sludge" band from NY who were active in the early 90's and they have become kinda a cult band because they have virtually no discography yet everyone who is serious about their heavy music loves them (including me) and I'm always seeing crusty punks with 13 patches on their rags and recently saw a pic of Ste from Extinction Of Mankind wearing a 13 T-shirt (or a patch can't remember) which leads me to believe that there's prob more 13 patches and shirts out there than there are records!

So when i said they have virtually no discography what I mean is criminally this band never got to release an album just 1 demo, 1 7" on their own 3 Split 7"'s and 3 tracks on various comps a total of 12 tracks (not 13 which would've been so cool) just under an hour of music is all they left behind at least as far as my extensive searching on the net can tell me, anyone knows different let me know!
So I was looking for some 13 stuff digitally online to replace my long gone vinyls and I managed to round up all of the material I mentioned above I then compiled it in chronological order, cleaned it up a little, re -tagged it, burned it to CD and then ripped it back into the computer! Just so there was as good as possible a complete 13 discography at 320kbps for me and now for you! If you like your music Slow, Heavy, Dirty and Sludgy and you're a fan of Winter, Hellhammer, Noothgrush, Grief etc and wonder where the likes of Coffins and The Body get their ideas from this is most definitely for you! I have no idea why no one has compiled or remastered this material and given it the full official release it deserves, so until someone does, this is as good as it gets. I like to think this kinda thing is what i started this blog for great bands like this with a minimal discography and hard to find vinyl only releases, drawing it all together and keeping it available for people who want to hear great bands like 13. If I was younger and richer I'd certainly be making some sort of attempt at doing official discographies of great "lost" bands like these.And as their records are all long out of print and fairly collectable (there's NOTHING on this discography comp you could buy new) I'm hoping that if any of the band come across this then they'll have no objections to me keeping it out here on the net however if they do please contact me and it's gone please don't crush me through mediafire as i put a lot of hours into it!
My original idea for doing this post was a few days into doing this blog during a very drunken blogging session i noticed a post on facebook from Alicia Morgan of 13 saying she had received copies of the 13 releases from someone and she was really glad of it because she had lost everything 13 related in a house fire and me being drunk I thought "Heyyyy, that suxxxxxx I've got alllll the 13 stuffff in one file I'm gonna upload itttt and send her the link mannn she'll be stoked" when i sobered up i realised that I'm sure that she was stoked to get the records replaced but some uber geek fan or other member of the band has bound to have winged her a copy of her own recordings by now! anyway while the file was already in there I thought I'd do this post all the same and share the awesome sludge juggernaut that is 13 with you lot! There's a ton of bands doing this kinda stuff out there but they can't touch 13  these guys are one of the originators of this sound and one of the best.Go Get DOOMED!

*NOTE* Please don't expect super clean high quality sparkling sound from this, this is downtuned and dirty music recorded cheaply and half of the tracks are only available on vinyl so have obviously been taken from these sources, however I have just listened to the whole thing myself whilst writing this and as far as I can hear only track 9 - "Whore" and track 10 - "Wrong" (Both taken from seperate split vinyls with EYEHATEGOD) are a bit poor quality-wise but I did a bit more research and looks like both these tracks were recorded on 4 track in 1994 so I'm guessing they may possibly be rehearsal room recordings tho this is just my reading between the lines not fact! Don't be put off by my inbuilt quality control alarms going off here because other than the tracks i mentioned this is as solid and as decent quality a round up of their discography as I've heard available anywhere and i've listened to it frequently!
Posted by Dave Ballantyne at Monday, February 25, 2013